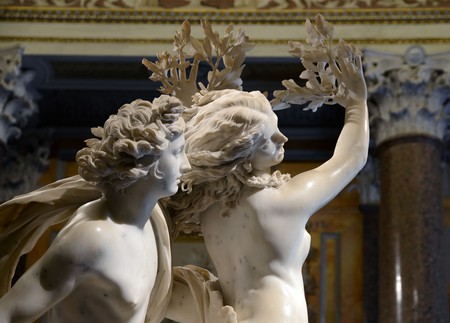 It would take a lifetime to soak in all of the culture and art that Rome has to offer, but there are some standout masterpieces that those who appreciate fine art ought to see. These 10 awe-inspiring works lie within museums, churches and palazzos around the city and cover different periods, mediums and styles. For must-see art lying within St. Peter’s Basilica and the Vatican Museums, check out 10 masterpieces you need to see in Vatican City; but for now, explore the 10 must-see art masterpieces in Rome.

Villa Farnesina is a suburban Renaissance villa that is probably the most underrated museum in all of Rome. It was built for Agostino Chigi, the treasurer of Pope Julius II, who commissioned Raphael (among others) to paint elaborate frescoes in the airy space. Raphael’s 16th century frescoes of Cupid and Psyche and the Triumph of Galatea adorn the ceiling of the loggia, or ground floor of the palazzo, and are the best known works in the villa. Raphael is recognized as one of the most important artists of the High Renaissance period, alongside Michelangelo and Leonardo da Vinci, and is celebrated for his harmonious compositions and ability to portray noble figures with ethereal grace. 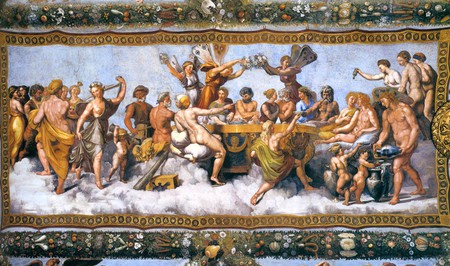 Raffaello's The Wedding Banquet of Cupid and Psyche | © WikiCommons

This statue will make you rethink what is humanly possible for an art genius to create. This life-sized marble statue residing within Galleria Borghese portrays Apollo clutching Daphne as she tries to escape him, precisely in the moment that her father begins her transformation into a laurel tree to save her from his grasp. Her fingers transforming into leaves are breathtakingly beautiful and demonstrate Bernini’s talent in spite of his young age (he was only 24 when he began to work on this statue). Cardinal Scipione Borghese was Bernini’s patron and commissioned him to create multiple statues for his collection, housed within Galleria Borghese.

3. Sarcophagus of the Spouses

This 6th century B.C. terracotta Etruscan sarcophagus is one of the greatest artifacts to remain of the ancient civilization that preceded the Romans. Located within the National Etruscan Museum of Villa Giulia, this piece depicts a married couple reclining at a banquet together. Because the two figures are of equal proportion and pose, it also suggests that the Etruscan culture was quite egalitarian in terms of gender. The Etruscans were strongly focused on the afterlife and sought to ensure that the deceased were comfortable in their resting places, creating ornate painted tombs (such as in Tarquinia) and elaborate sarcophagi. 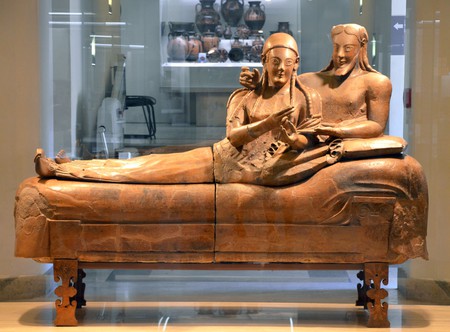 Sarcophagus of the Spouses | ©Flickr/Carole Raddato

4. Caravaggio’s Paintings in the Contarelli Chapel

Caravaggio is one of the most celebrated Baroque painters in Italian history; he was a radical innovator that painted dramatic scenes and expertly employed the chiaroscuro technique, strongly contrasting light and dark to create multidimensional works of art with a strong base in naturalism. His masterpieces are dotted around Rome, but the Contarelli Chapel in San Luigi dei Francesi Church is notable because it features three Caravaggio paintings together (a jackpot for lovers of his works). Painted between 1599-1600, the cycle of paintings represent the life of Matthew the Apostle: The Calling of St. Matthew, The Inspiration of St. Matthew and The Martyrdom of St. Matthew. 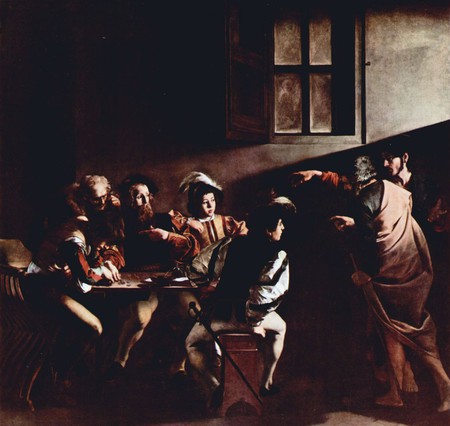 This optical illusion by Borromini is a real treat for the senses. The Baroque Prospective Gallery appears to be a long colonnade but is in fact much shorter than it appears. Only 9 meters long, it has a rising floor, descending ceiling and decreasing columns that work together to create this playful visual; even the hedges which lie in the back are made of stone. This unexpected gem is part of the Palazzo Spada, which houses the 17th century Spada family painting gallery, a small collection of works by artists such as Titan, Guercino and Gentileschi. 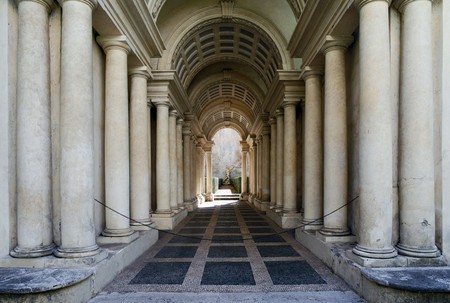 Although the majority of Michelangelo’s most famous works in Rome reside in Vatican City, his stirring statue of Moses lies within the Basilica di San Pietro in Vincoli, next to the Monti neighborhood. Moses is the central figure of a tomb commissioned by Pope Julius II in the 16th century, and is notable because it depicts Moses with horns on his head (due to a mistranslation of Hebrew in the Bible, in which the words ‘rays of light’ were interpreted as ‘horns’). 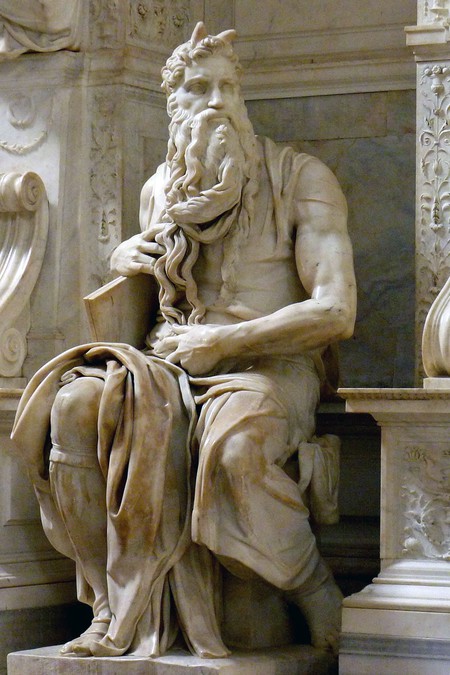 7. Mosaics in Santa Maria in Trastevere

The Basilica of Santa Maria in Trastevere isn’t only well known for being one of the oldest churches in Rome — it also has stunning 12th century Byzantine mosaics by Pietro Cavallini that depict the life of Virgin Mary. The apse shows the Coronation of the Virgin surrounded by paints and features Pope Innocent II (who rebuilt the church in 1130) holding a model of the church. 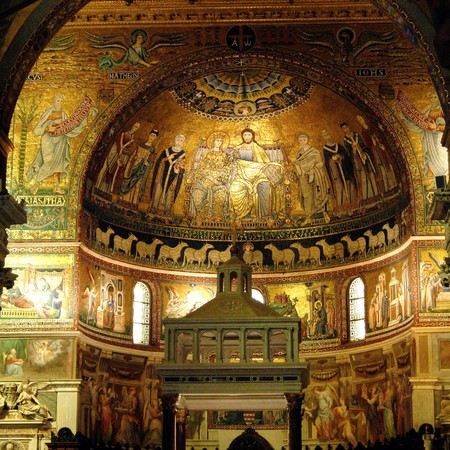 The opulent Gallery of Mirrors lies within the Renaissance Palazzo Doria Pamphilj and features 18th century frescoes, gilded mirrors and dozens of marble statues. The gallery resembles a miniature Versailles but without the crowds. It regularly showcases the incredible private art collection of the Doria Pamphilj family, which includes works by Raphael, Titian, Caravaggio and Velázquez, among others notable masters.

This Hellenistic Greek bronze sculpture of a seated boxer is believed to date back to 300-50 B.C. and is housed within Palazzo Massimo, one of four National Museums of Rome. The boxer’s emotive and tired face, along with his hunched muscular body sculpted in incredible detail, is a masterpiece of realism and athletic victory. 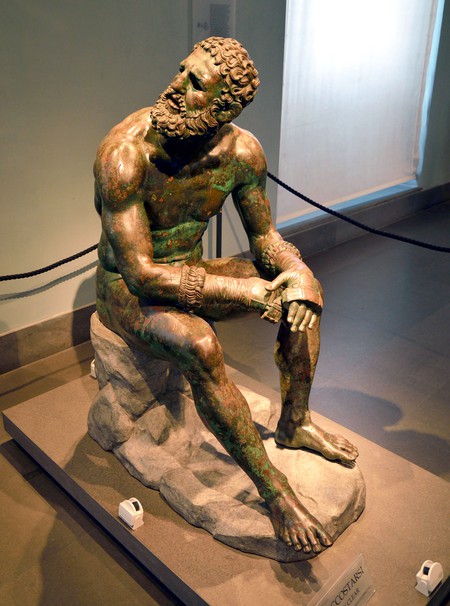 Another breathtaking piece that showcases Bernini’s artistry is the Ecstasy of Saint Theresa statue, located in the Santa Maria della Vittorio Church. One of the finest examples of High Roman Baroque, it depicts Teresa of Ávila, a Spanish mystic and Carmelite nun, during a moment of religious ecstasy with an angel in which she felt a ‘pain…so great that it made me moan; and yet so surpassing…that I could not wish to be rid of it’. The statue is admired for its sensuality and method of combining sculpture with architecture and painting in its small chapel. 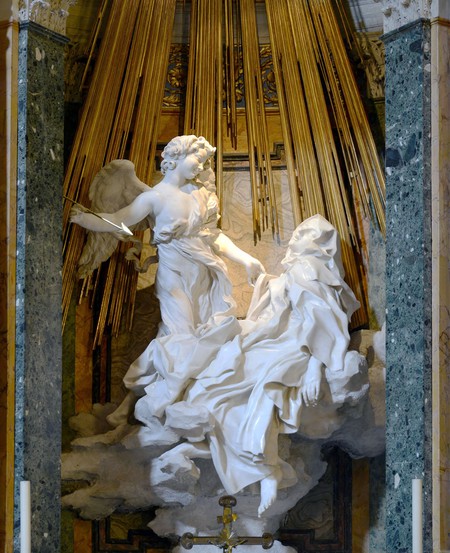 Bernini's The Ecstasy of Saint Teresa | © WikiCommons
Give us feedback