11 Masterpieces You Can See Only in Milan 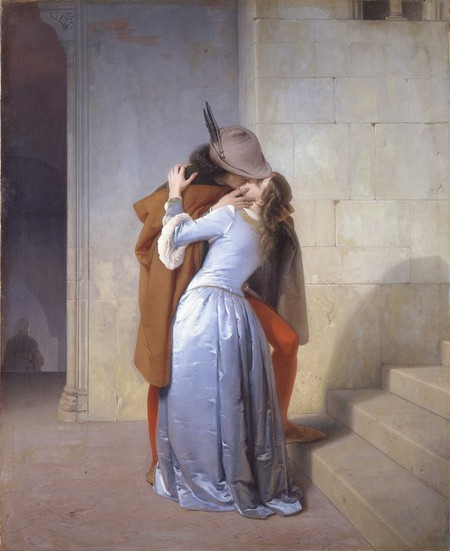 From Renaissance paintings and frescoes to iconic symbols of modern Italian history, journey through the masterpieces of Milan’s permanent art collections.

The art collection in Milan provides a history lesson, from the old masters of the Renaissance up to the Futurists reckoning with modernity in the lead-up to World War I. Italy has been home to an unparalleled collection of visionaries for centuries, and Milan’s permanent collection boasts many artistic treasures, with famous works by Leonardo da Vinci, Raphael, Michelangelo, Canaletto, Caravaggio, Francesco Hayez and Umberto Boccioni, among others.

Despite the fact that his most well-known work, The Birth of Venus (mid-1480s), features Greek mythological figures, Sandro Botticelli’s oeuvre mainly concerns itself with Christian iconography. A deeply religious man, he participated in the 1497 event known as the Bonfire of the Vanities, during which he destroyed in a blaze his own paintings featuring pagan themes. Madonna of the Book, one of three Botticellis on display in Milan, depicts a pensive Mary holding the child as she reads from a devotional book. Her lapis lazuli robe glows with the warmth of the twilight sky emanating from the window as the young Jesus looks up in admiration. The painting typifies Botticelli’s mature period, marked by a placid stillness that is later replaced by an intensity of faith. 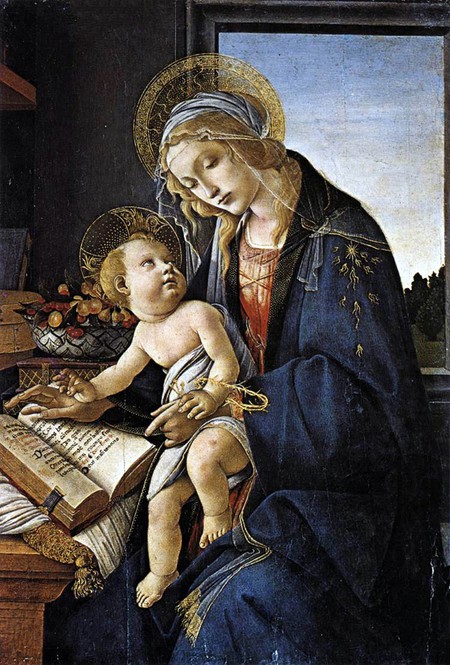 Leonardo da Vinci’s The Last Supper is one of the most enduring images in the Western canon. The mural is in the refectory of UNESCO World Heritage site Chiesa Santa Maria delle Grazie (Holy Mary of Grace). A dramatic scene, it features Jesus’s 12 apostles reacting to the news that one of them will betray him. Using advanced techniques in perspective, Leonardo adds extra depth by allowing each actor his own emotive response. Peter appears angry and John faint, while Judas has his face in the shadow. Unfortunately, the physical painting has not endured as well as its reputation. Painted by applying tempura to dry plaster, The Last Supper deviated from traditional fresco techniques, which allowed for a remarkable level of detail, light and shadow, but caused the paint to chip mere decades after its completion. It’s been restored numerous times over the years and has survived neglect, the Napoleonic Wars and Nazi bombings. Visitors are only admitted every 15 minutes, with a maximum capacity of 30 people at any given time, but a trip to Milan isn’t complete without seeing this masterpiece.

The Marriage of the Virgin exemplifies Raphael’s unparalleled compositional vision and exactness, and is known as one of the finest examples of Italian Renaissance perspective painting. While the foreground of the canvas depicts the titular marriage scene, Raphael’s use of perspective renders the temple in the background the true focus of the work. The architecture of the 16-arched temple shows the influence of leading Renaissance architect Donato Bramante, as well as painter Piero della Francesca. Each element of The Marriage of the Virgin was executed in accordance with mathematical order, and recent infrared technology has revealed a dense mass of lines converging on the temple door. These lines follow the recommendations of Piero’s pre-1500 treatise De Prospectiva Pingendi (On the Perspective of Painting). Subsequently, it is fitting that you can view Raphael’s painting next to Piero’s Montefeltro altar at the Pinacoteca di Brera. This pairing highlights the shared traditions of two artists who both started their practice under the perspective traditions of the city of Urbino. 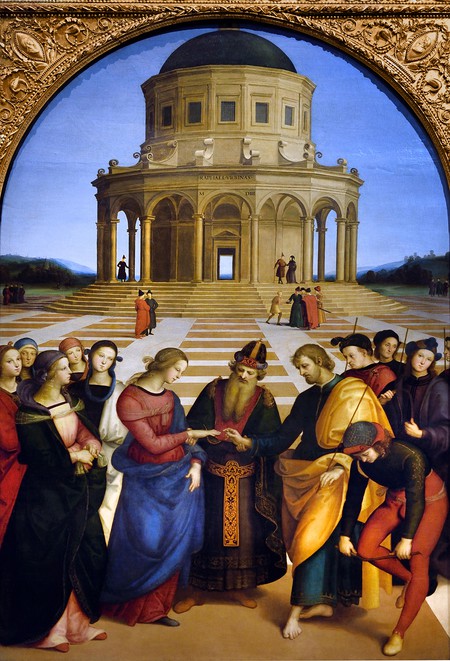 Pieta Rondanini is the last-ever creation of Renaissance master Michelangelo. The white marble sculpture revisits the subject of Mary mourning over the emaciated body of the dead Christ, which the artist had first approached in his 1499 Pietà. Mary holds Christ in a loving embrace and the elongated figures almost seem to merge into one another. The carving was never finished, but the simplicity of the work is hauntingly beautiful.

Supper at Emmaus (1606) is an adaptation of a subject that Caravaggio first attempted five years earlier in a painting of the same name, which is on view at The National Gallery in London. This second attempt is believed to have been created while the painter was in exile on murder charges. The image depicts the biblical scene when Jesus Christ, resurrected, reveals himself to two of his disciples. The work is testament to Caravaggio’s mastery of light, with dramatic chiaroscuro – the technique he helped innovate that contrasts bold lights with darks – underscoring the intensity of this sacred moment. This later version is generally considered the true masterpiece because of its heightened atmosphere and greater sense of intimacy.

Canaletto’s ‘The Pier Towards Riva degli Schiavoni With the Column of Saint Mark’ (before 1742) at Pinacoteca, Castello Sforzesco

Canaletto was a virtuoso of Italy’s Venetian school of painting, and this depiction of the lagoon by Saint Mark’s Square in Venice is an atmospheric masterpiece. The immense detail and depth of the work perfectly capture the bustle of life in the city while also paying tribute to the splendour of the square’s monument and palace. Canaletto attained this level of realism with assistance from a camera obscura, an early step in what would become the invention of photography.

The lagoon and Saint Mark’s Square were a favourite subject of the artist and he painted several other variations, including The Pier Towards the Mint With the Column of Saint Theodore, showing the square from the opposite side. In the Pinacoteca at Castello Sforzesco you have the rare opportunity of viewing the two paintings alongside one another. Both works are still in the gilded frames from the time of their commissioning in 1742. Also on view in Milan (at the Pinacoteca di Brera) is Canaletto’s View of the Grand Canal Looking Toward the Punta della Dogana (1740-1745).

Arguably Francesco Hayez’s most famous painting, The Kiss is emblematic of a brief period of optimism and sense of freedom in the young Italy that emerged from the Second War of Independence. The work was unveiled in the Brera Exhibition of 1859, shortly after Victor Emanuel II and Napoleon III entered Milan. The passionate embrace between a solider and a maiden is said to symbolise love of the motherland and zest for life. The Medieval-inspired scene is typical of 19th-century Romanticism, while the sumptuous colours reflect Hayez’s early training in Venice, where colour composition and handling of light were priorities. Indeed, the illuminated folds of the blue dress imbue the scene with a sense of serenity. In the following years Hayez painted several other versions of The Kiss (including one for himself), but the original that resides in Brera possesses historical significance. 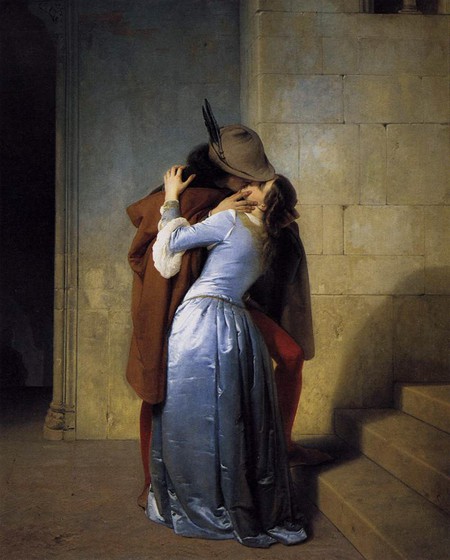 This painting is a seminal example turn-of-the-century Social Realism and marks the socio-economic and political strife that affected Italy in those years: the aftermath of unification, industrialisation and the resulting struggles of both urban and rural working classes. The fourth estate is a term that refers to an unrecognised social or political force, and that is what’s presented in the painting – the subject is a worker’s public protest (presumably) in Volpedo, Piedmont, where the artist was born. Pellizza pays tribute to a noble and strong proletariat, the mass of people advancing peacefully. The earthy colour palette of browns, greys and greens acknowledges the poverty of the people, yet they are bathed in light. The Fourth Estate is the climax of a long period of study by the artist on the theme of workers’ rights and social reform. The power and presence of this final masterpiece is enhanced by the scale of the canvas, which is a monumental 283cm x 500cm (111in x 197in).

Futurism, the movement in which Umberto Boccioni played a critical role, was conceived as a force of both artistic and political innovation. It was not just a renewal of artistic form, but a mission of cultural and social rejuvenation. Futurist ideology was born from discontent in the final decades of the 19th century, which saw Italy fall behind in Europe’s imperial scramble and modern development. The group’s 1910 manifesto, co-written by Boccioni, declared, “In the eyes of other countries, Italy is still a land of the dead, a vast Pompeii, whit with sepulchres. But Italy is being reborn. Its political resurgence will be followed by a cultural resurgence.” Boccioni’s Elasticity gives painterly form to this unwavering sentiment. The work is an homage to industrial modernisation – a muscular horse charges into the future, there are factories on the horizon and metal construction apparatus emerges from plumes of smoke. Boccioni borrowed the Cubist planes of Paul Cezanne and Georges Braque to convey movement and a state of flux. In Elasticity, the colourful geometric forms create a captivating dynamism. Along with the large-scale bronze sculpture Unique Forms of Continuity in Space (1913), also in the collection at Museo del Novecento, Elasticity is among Boccioni’s most important works and is not to be missed.

In Chiesa di San Maurizio al Monastero Maggiore, a Benedictine monastery in Milan, there is a fresco cycle so impressive it is nicknamed ‘The Sistine Chapel of Milan’. The spectacular interior marks the evolution of painting in Lombardy throughout the 1500s, with contributions from Bernardino Luini and his sons Aurelio, Evangelista and Giovan Pietro; Boltraffio; and Simone Peterzano. 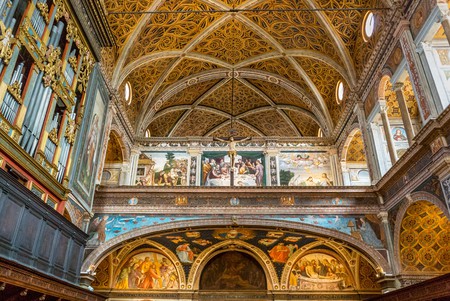 The Permanent Collection of Italian Design at the Triennale Design Museum

In a city so synonymous with design, it would be wrong not to pay tribute to Italy’s many design masterpieces. The Design Museum at contemporary-art space Triennale Milano houses a permanent collection of 1,600 objects of Italian design, from 1927 to the present day. This assemblage of iconic objects (as varied as a 1950 Galletto 160cc motorbike and a 1967 Artemide lamp) is a testament to the innovation and flair of the nation’s creative minds, as well as a map of cultural and industrial changes in in the country.