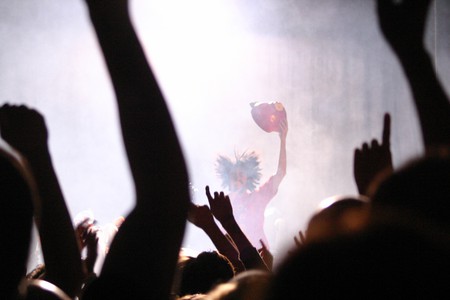 When you think of Italy, your mind probably goes to good food, visual art and gondolas. You probably don’t consider Italy a country with a prevalent rap and hip-hop culture. However, in the last few years these have become popular music genres. The musicians are real stars, playing at the very Italian, mainstream music festival, Sanremo Festival. Here’s a list of Italian rappers and hip-hop artists that you should be listening to in 2017.

Caparezza is an Italian rapper from Apulia, well known for creating music which blends many different styles. His songs criticize society and politics with sharp irony, using metaphors and references to mass media and advertising. They sometimes require a high level of knowledge to fully appreciate them. He has previously collaborated with Tony Hadley on the acclaimed song ‘Goodbye Malinconia’.

A rapper, DJ and producer, Bassi Maestro (real name Davide Bassi), is one of the precursors of the Italian underground-rap movement. His music reflects his career, offering flashbacks to the 90s whilst incorporating international styles. His latest album, Mia Maestà, is a perfect summary of his output and highlights his influences—A$AP Rocky, Cypress Hill and Schoolboy Q. Not a social media lover, the rapper created his own project, Down with Bassi, to spread his music without having to use the classic platforms.

Italian rapper Fabri Fibra has recently taken a more introspective approach to find inspiration in his own life for his songs. In a recent interview, he declared that, “telling the truth is a luxury and art is the only way to do it. Music that does not say certain things loses its purpose”. That’s why his latest album, Fenomeno, is a combination of social content and lyrics against his family, he sentences guilty for having changed his perception of life.

Fedez (Federico Leonardo Lucia) is not only a rapper but also a well known Italian celebrity due to his engagement to the fashion blogger Chiara Ferragni, his career started in 2011 with a self-produced album. His music is mainstream and easy to listen to, full of political and social references but without going too deep into issues. He often works with J-Ax, another Italian rapper who’s moved into the mainstream.

Rocco Hunt’s music is very similar to songs by American rappers but with an added Neapolitan touch, due his use of the Naples dialect. It is this, and his ability write the truth about what he sees in society, which many see as his main strength. ‘Nu Juorno Buono’ (below) is one his main songs.

Together with Rocco Hunt, Clementino is one of the most famous and proficient rappers in the Italian and Neapolitan language. Well known for his partnerships with important Italian rappers such as Fabri Fibra, Clementino has just released a new album called Vulcano where he sings about his personal life and also his city, Naples, in a style which mixes rap with more popular music.

Mondo Marcio entered the rap game at an extremely young age and has had an evolution that few other rappers are able to match. All his songs have a very personal reading of reality, and when he was younger were a definite vent for his anger. Marcio quarreled with many, but recently seems to have settled down and his music is now a mix of old-school rap, soul and also a bit of rock and blues.

Guè Pequeno is considered a controversial character: loved and hated in equal measure. The concept of his songs is often more interesting than the words he uses and he’s well known for his crushing criticism of Italian rap, from which he constantly tries to detach himself.

Old-school style rap, an opinion on everything, strong music and lyrics: these are the main elements of Marracash’s music, one of the few still faithful to the classical idea of rap. He’s a member of the crew, Dogo Gang and today his main collaboration is with rapper Guè Pequeno.

Emis Killa is one of the most loved Italian rappers, having also been one of the judges of The Voice of Italy. In his career he has moved from producing freestyle rap to music that’s more catchy, and today blends hot topics and heavy rhymes using the energetic rhythms of pop music.