10 Contemporary Italian Photographers You Should Know

What did Italians look like just after World War II? Gianni Berengo Gardin‘s immense photographic archive holds the answer. Sometimes dubbed as the Italian Henri Cartier-Bresson for his lyrical, poetic photography, Berengo Gardin (b. 1930) has chronicled the life of the Italian people in the late 1950s and throughout the 1960s. He witnessed them at work and in their free time, amassing an invaluable archive of a particularly prosperous era in Italy’s history. But this master photographer also engaged in more focused, dramatic documentary projects. The most important dates back to 1968, when he journeyed through several psychiatric asylums and took pictures that helped accelerating the closure of such institutions in Italy, a historic event in the country’s recent past.

Mimmo Jodice was never really interested in using the camera to document reality, even when, in his first years as a photographer, that’s exactly what he did. His early work captures stories in his native city, Naples, but Jodice’s attention for the formal qualities of an image and photography’s potential to create – not only to record – is already present. This trait became progressively stronger as the years went by, and led Jodice, who recently celebrated his 80th birthday, to take beautiful, evocative images that invite purely aesthetic enjoyment. One of his best known series, Mediterraneo, features visionary, unique pictures of Greco-Roman statues and temples in the area of Naples, the city that inspired most of his best work.

With ten World Press Photo Awards, a Robert Capa Gold Medal, a Dr. Erich Solomon Prize, a Leica Medal of Excellence and countless more awards and recognitions under his belt, Paolo Pellegrin, 54, is Italy’s leading contemporary photojournalist. ‘I’m more interested in a photography that is “unfinished” – a photography that is suggestive and can trigger a conversation or a dialogue,’ he says. A Magnum photographer, Pellegrin has contributed to bringing a less straightforward and more subjective approach to war photography, with his dark, blurry pictures that, far from being bad photographs, rather emphasise the drama of conflict.

Provocative could well be the middle name of Oliviero Toscani, a fashion and advertising photographer who works with leading international brands. His most brilliant creations were made for Benetton, the Italian clothing company, and stirred indignant reactions more often than not. In 1981, he photographed a nun giving a chaste kiss to a priest. For a campaign centered on fighting racism, Toscani created the picture of a black woman breast-feeding a white baby; and that of three human hearts, lying on a table, labeled as white, black and yellow. An ad for the Jesus jeans featured the close-up of a woman’s bottom, wearing short jeans – the line reads ‘Who loves me, follows me’. 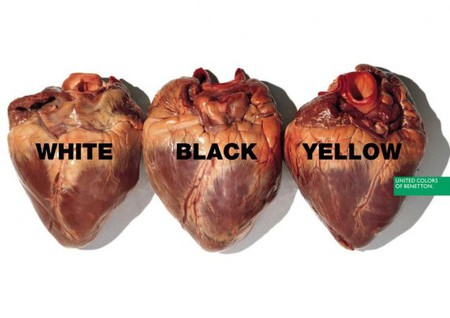 Letizia Battaglia is a courageous photographer. She is known as ‘the photographer of the Mafia’ because she has photographed that particular criminal world for years, and during its most cruel, bloody era – the 1980s and the early 1990s. Magistrates Giovanni Falcone and Paolo Borsellino, the two most prominent figures killed by the Mafia in 1992, were both friends of Battaglia’s. Her gruesome pictures show bodies of murdered men lying on the street, Mafia men being arrested, and the relatives of those killed while fighting the organisation in the grip of grief. Letizia Battaglia’s documentation of that critical phase in Italy’s modern history is a unique record that has become an indelible part of the nation’s collective memory.

You can tell a photograph by Massimo Vitali from a thousand. It will likely be a large format photograph, taken from a rather high vantage point, and most importantly, showing crowds of people enjoying their spare time at the pool, in the park, at the disco or, as is the case for his very best-known images, on the beach. Vitali’s strange images of beach-goers have been exhibited all around the world in top museums. His precise, trademark style has made him one of Italy’s most internationally acclaimed contemporary artists – quite a turn for someone who has been a photojournalist for nearly twenty years before shifting to creative photography. 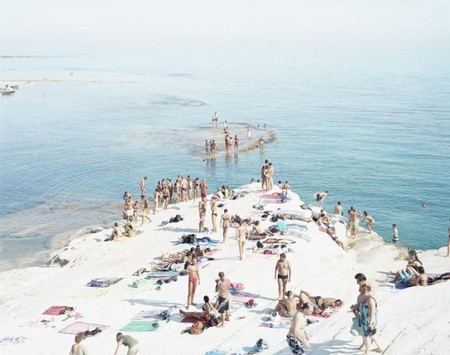 34 year-old Fabio Bucciarelli is among the best new photojournalists around, and not just in Italy. With his 2012 reportage of Syrian civil war, Battle to Death, Bucciarelli won numerous awards, from the Robert Capa Gold Medal to the World Press Photo Awards. Wholeheartedly committed to documentary photography and photojournalism, Bucciarelli has already been in Mali, Libya, Turkey, Egypt, Burma, Haiti, Gaza and more; and has recently covered the conflicts erupted in Eastern Ukraine. Images by Fabio Bucciarelli have appeared in top international publications such as TIME Magazine, The New York Times, The Guardian, The Wall Street Journal, Paris Match and Die Zeit, among others.

What is most striking about Davide Monteleone‘s work is the gloomy atmosphere that usually characterises his pictures. Gifted with an extremely personal vision, Monteleone has dedicated much of his career to the exploration of Russia, through works such as Dusha, an effort in representing daily life in the country, and Red Thistle, which investigates the tormented and violent region of the North Caucasus. His work has been granted prominent, international prizes like the World Press Photo Awards and the Carmignac Gestion Photojournalism Award. The latter allowed him to finance his latest personal documentary project Spasibo (Russian for ‘thank you’), a photo essay on modern Chechnya after the end of the war against Russia.

Luca Campigotto was born in Venice in 1962. A passionate traveller and a photographer of places, Campigotto’s vision transcends the physical space in front of his lens to construct a new evocative, spellbinding reality through carefully chosen compositions and a skillful, sophisticated use of light. His 1995 series Venetia Obscura — the work that set off his international career — is a magical nocturne portraiture of Venice, devoid of the hordes of tourists that usually harass the city. After that groundbreaking project, Campigotto went on to shoot in Bangkok, Berlin, Chicago, San Francisco and, most lately, New York, for the spectacular series Gotham City. He has also photographed several historic sites around the world, and made an especially superlative work with Egypt’s Pyramids.

Italy is renowned all around the world for its historic sites, cities full of art and beautiful natural landscapes. Guido Guidi was among the first photographers, from the early 1970s on, to forge a new landscape photography for Italy. Influenced by neorealism and conceptual art, Guidi pointed his lens not on the country’s obvious beauties but on its ordinary, even dull corners. His images feature not the Colosseum, notThe Last Supper, not the dramatic coasts, but quiet, provincial streets, decaying buildings and empty rooms, unimpressive pieces of landscape that are, however, as Italian as it gets. A retrospective show of Guidi’s work called Veramente is now open in Amsterdam’s Huis Marseille (until 7 September). 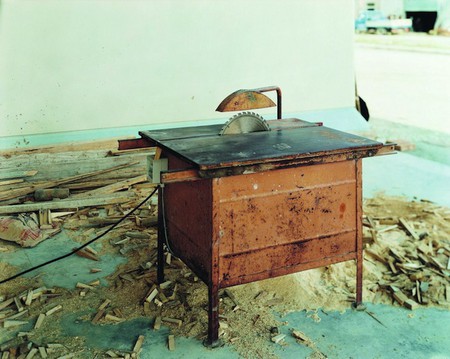 © Guido Guidi.
Give us feedback