10 Artworks By Leonardo Da Vinci You Should Know

Widely considered to be the most versatile and talented person to have ever lived in the western world, Leonardo da Vinci hardly needs an introduction. His genius spanned many different fields; painter, sculptor, architect, scientist, inventor, and writer, to name just a few, da Vinci was the original ‘Renaissance man.’ His paintings and drawings are recognized as some of the greatest of all time, and we profile ten of the most important works to know.

The Mona Lisa is arguably the best-known painting of all time. Painted between 1503 and 1506 in Florence, today La Gioconda has found her home at the Louvre Museum in Paris. The painting’s title comes from Renaissance art historian Giorgio Vasari’s biography of Leonardo, which was published 31 years after the artist’s death. It is widely accepted among scholars that the portrait is of Lisa del Giocondo, a member of a wealthy Florentine family. In 1911, the Mona Lisa was stolen from the Louvre, creating worldwide intrigue and significantly increasing its public profile. The thief was discovered two years later – Vincenzo Peruggia had taken the Mona Lisa back to Italy, where he was hailed as a patriot for bringing her home. 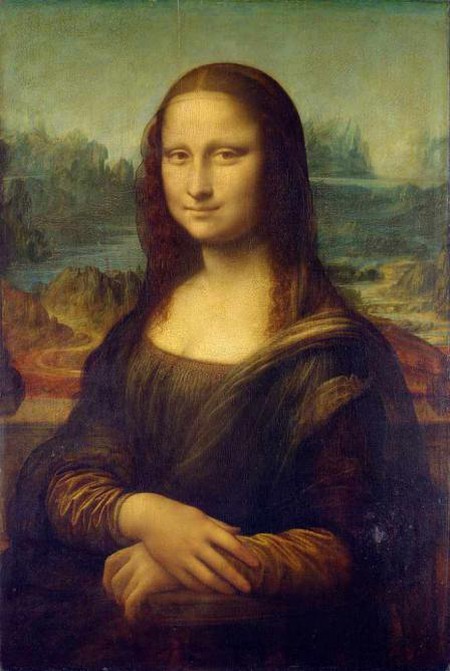 Called ‘Il Cenacolo’ in Italy, The Last Supper is a mural showing Jesus’ final meal with his disciples that Leonardo painted in the refectory of the Convent of Santa Maria delle Grazie in Milan. In the scene, Jesus has announced that one of his followers would betray him. Leonardo skillfully portrays the specific reaction of each man as they react to the concerning news. Rather than painting on wet plaster, the traditional medium for most frescoes, the artist chose dry wall as his medium to achieve greater detail in the work. Unfortunately, The Last Supper has suffered significant damage over the years due to environmental factors and bombings during World War II. It nonetheless remains one of the most studied and scrutinized paintings in the history of art. 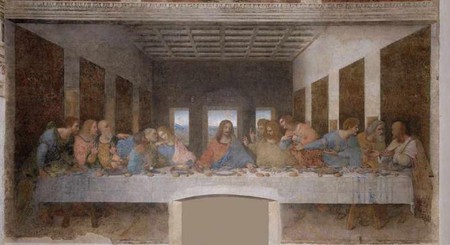 One of the most recognizable works by Leonardo da Vinci is a drawing done with pen and ink on paper. The drawing is named after the Roman architect Vitruvius because it is accompanied by notes based on his work. Vitruvian Man is a study of the proportions of the human body, in which Leonardo combined a close reading of Vitruvius’ ancient text on geometry with his own observations of actual human bodies. The drawing has been used as an example of the symmetry of the human body. The image also reveals Leonardo’s belief that the workings of the human body reflect the workings of the universe. 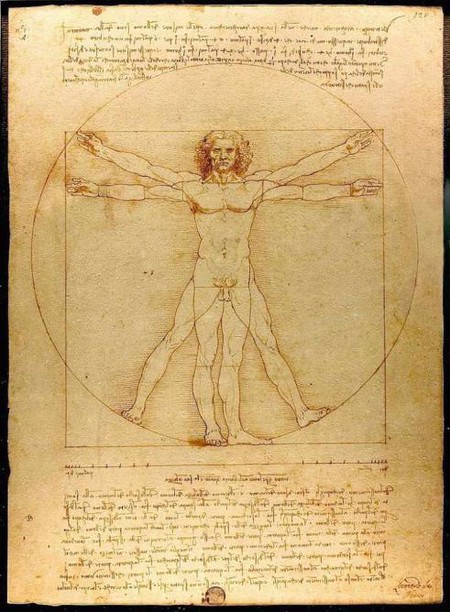 Portrait of a man in red chalk / Self-portrait

This enigmatic drawing by Leonardo is widely accepted as a likeness of the Renaissance man himself. It is believed that the red chalk portrait was completed around 1510, when Leonardo was about 60 years old. It has often been observed that the subject appears to be much older than that though, thanks to his long hair, flowing beard and deep brow lines that impart a certain sageness. This was the traditional way to represent philosophers, prophets and even God in art. There is little doubt that this is Leonardo’s work, as the extremely fine lines and the high quality of the shadowing achieved through hatching is characteristic of the artist’s left-handed drawing. 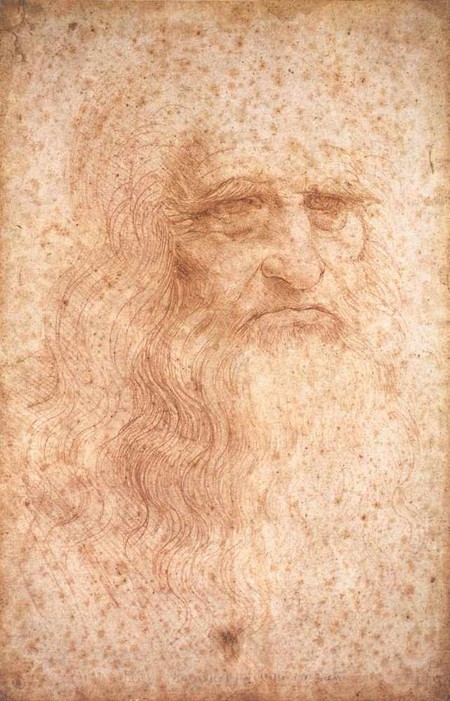 Lady with an Ermine

Lady with an Ermine, completed around 1490, is one of only four portraits of women painted by Leonardo. Currently on display at the Wawel Royal Castle in Kraków, Poland, the oil painting is a portrait of the young Cecilia Gallerani, the mistress of Leonardo’s patron, Luduvico Sforza, Duke of Milan. Gallerani is shown wearing a relatively simple dress, revealing that she does not come from a noble family. The significance of the white-coated ermine, similar to a weasel, has been discussed at length. It is possible that the animal represents purity, as it was believed that an ermine would never soil its white coat under any circumstances. 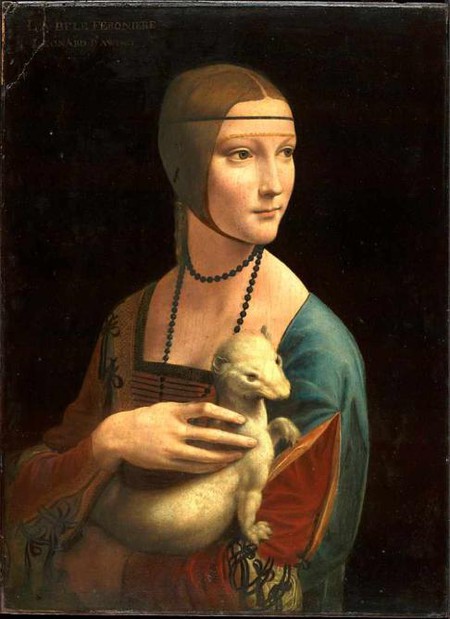 Lady with an Ermine | © WikiCommons

Another one of Leonardo’s rare female portraits is of the 15th century Florentine aristocrat Ginevra de’ Benci. A highlight of the collection in the National Gallery of Art in Washington DC, it is the only painting by Leonardo on public view in the Americas. The beautiful Ginevra is especially austere in this work – she shows no hint of a smile, like the one evident on the face of the Mona Lisa. A juniper tree in the background symbolizes chastity and is a pun on her name; the Italian word being ginepro. The outdoor setting was uncommon because, at the time, women were typically portrayed inside the home. 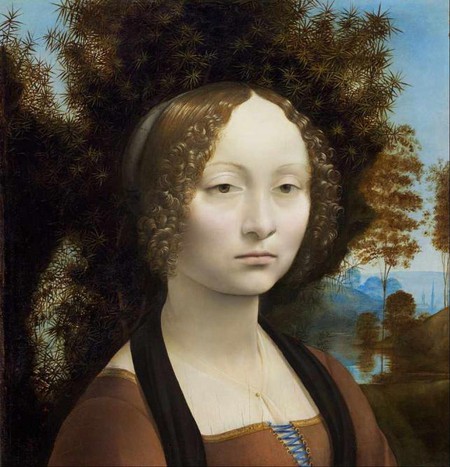 Believed to be Leonardo’s last painting, St. John the Baptist was painted between 1513 and 1516, when the High Renaissance was transitioning to Mannerism. In this work Leonardo depicts St. John in a playful manner, an atypical representation of the man usually regarded as a fiery character. Here, he has long, curly hair, is dressed in pelts and has that enigmatic smile similar to the one worn by the Mona Lisa. St. John’s pointing finger extends towards the heavens, suggesting the significance of salvation through baptism. This gesture appears in other works by Leonardo, too. 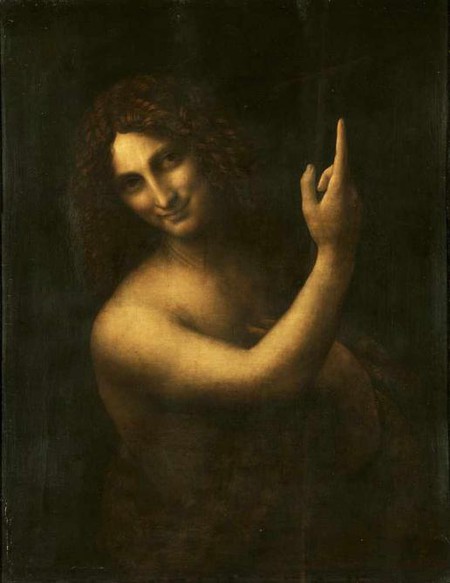 The Virgin of the Rocks

Two nearly identical versions of The Virgin of the Rocks exist, one in the Louvre in Paris, the other in London’s National Gallery. Both are more than six feet tall and depict the Madonna and Jesus as a child, along with the infant John the Baptist and an angel. The painting housed in the Louvre is considered to be the prime version, meaning it is the earlier of the two. It is regarded as exemplary of Leonardo’s sfumato technique of painting without creating obvious lines or borders. The figures are arranged in a triangular shape and gesture towards one another, which contributes to the narrative quality of the work. 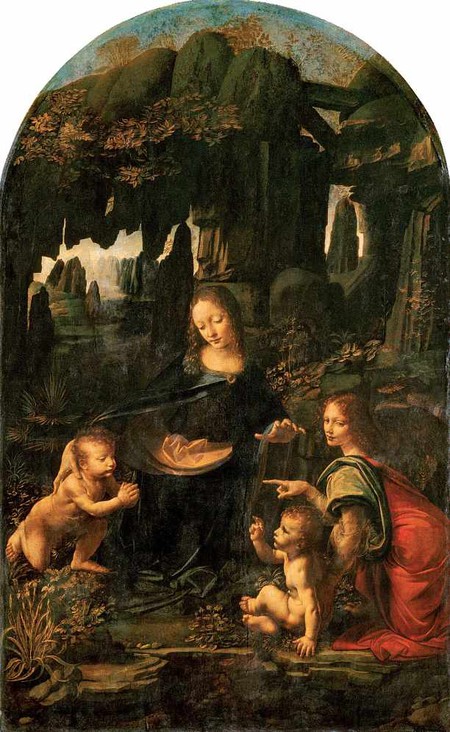 The Virgin and Child with St. Anne

In this painting completed around 1503, Leonardo depicts Saint Anne, her daughter the Virgin Mary and the infant Jesus, who is struggling with a sacrificial lamb. The dynamic composition clearly shows Mary reaching out towards the baby Jesus. At the same time she sits atop Saint Anne’s lap, interlocking the three figures together. Similar to the technique used in The Virgin of the Rocks, Leonardo sets a religious scene in a fantastic landscape. The mountainous background communicates his interest in geology and is a recurring theme in much of his artwork. 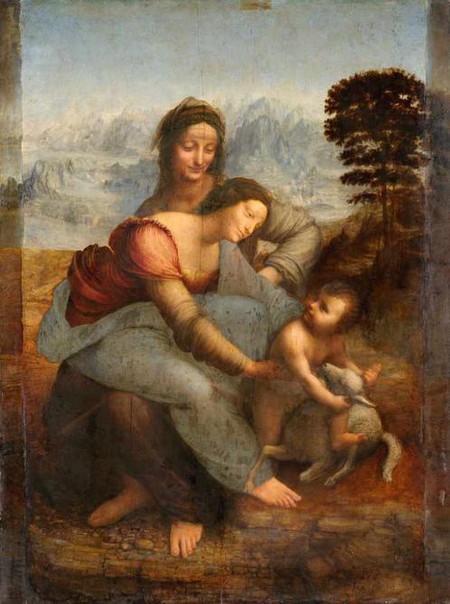 Adoration of the Magi

An unfinished early work, the Adoration of the Magi was commissioned in 1480 by the Augustinian monks of San Donato A Scopeto near Florence. Notable is the existence of many sketches and drawings which were done in preparation for this painting, more-so than any other artwork undertaken by Leonardo. The scene includes a myriad of people in different poses surrounding the Virgin and baby Jesus. In the background, there is a ruined palace and men on horseback engaging in a wild battle. Though it never did progress past the brown ink and yellow ochre stages, the Adoration of the Magi is an important work revealing hints of what was to come in Leonardo’s later life. He was only about 20 years old at the time and well on his way to breaking away from his master, Andrea del Verocchio. 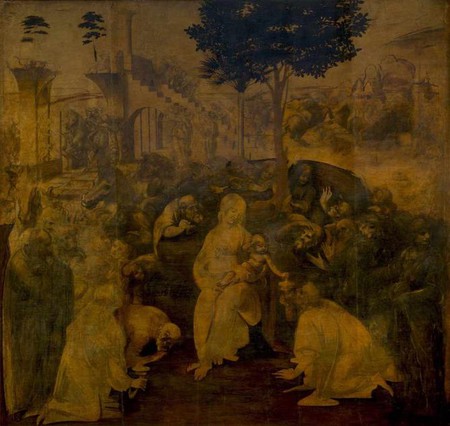 Adoration of the Magi | © Google Art Project/WikiCommons
Give us feedback