10 Artworks By Caravaggio You Should Know

Throughout his lifetime Caravaggio was known as a rebel – he was involved in sword fights, brawls, and even committed murder. His personal life was constantly marked by drama and turmoil, qualities that are reflected in his paintings of brooding chiaroscuro. His realistic pieces, at times considered controversial, left an indelible mark on the world of European art. Here we look at ten of the artist’s most important works.

‘The Calling of Saint Matthew’

This masterpiece by Caravaggio shows the very moment in which Jesus inspired Matthew to follow him. Standing alongside Saint Peter, Jesus points at Matthew, who is sitting at a table with four other men. It is evident that Caravaggio was inspired by the real world in most of his art and this work is no exception, as he anchors the biblical scene in a modern reality. It is also possible that he was influenced by Michelangelo’s Sistine Chapel painting of God, pointing directly towards Adam to awaken him. 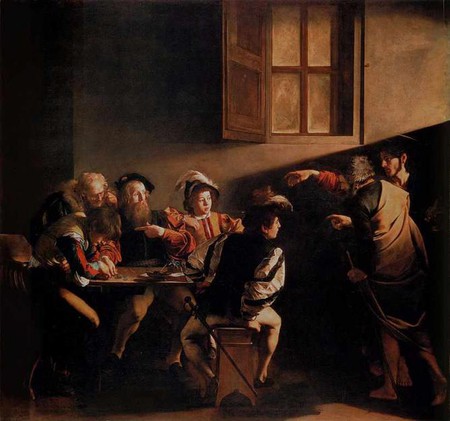 Another painting with a biblical theme, ‘Doubting Thomas’ is also known as ‘The Incredulity of Saint Thomas’. One of the apostles, Thomas doubted the resurrection of Christ, saying he would not believe it until he could place his finger where the nails had pierced his crucified body. Caravaggio provides us with an incredibly detailed, visceral and gory picture of the scene – it’s even possible to see Thomas’ dirty fingernails as he confirms sensation of the wound. 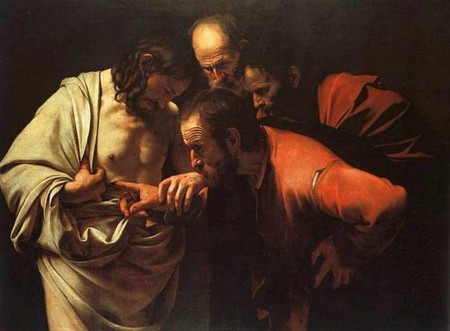 The Incredulity of Saint Thomas by Caravaggio | ©WikiCommons/Public Domain

Bacchus was the Roman name for Dionysus, the Greek god of wine, madness and ecstasy. Here, he is, somewhat appropriately, portrayed by Caravaggio as a 17th century Italian teenager. The painting is interesting for a number of reasons: Many have speculated that Caravaggio used a mirror to paint, modelling himself posing as Bacchus (note that the wine is held in the figure’s left hand). What’s more, upon restoration of the work, a tiny reflection of Caravaggio, paintbrush in hand, was also discovered on the wine carafe! 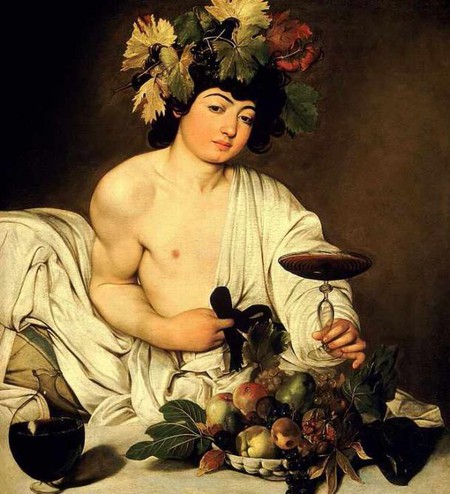 Unlike most Italian art of the time, ‘The Fortune Teller’ does not portray a story from the Bible or Greco-Roman mythology. It is simply a scene from everyday life, which was popular in the paintings of northern Europe, not Italy. Caravaggio’s work shows a wealthy young man who naively trusts a gypsy girl to read his palm. He stares into her eyes as she gently slips a ring off his finger! The work is an example of the artist’s penchant for drawing his inspiration from nature and everyday events, rather than from the works of the hallowed artistic masters of the past. 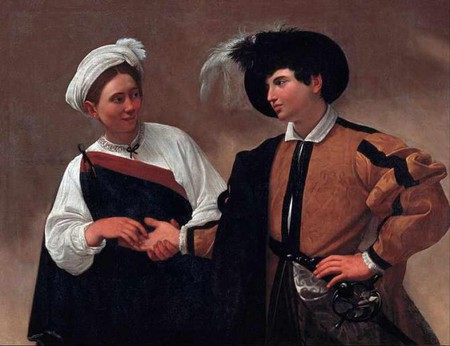 ‘The Beheading of Saint John the Baptist’

Hailed as “one of the most important works in Western painting” by author Andrea Pomella, this masterpiece was the largest altarpiece ever painted by Caravaggio. The canvas is so large that the figures are approximately life-sized, hanging dominantly in St. John’s Co-Cathedral in Malta, the church for which it was originally commissioned. The oil depicts the execution of John the Baptist and is the only work that Caravaggio ever signed. His signature, located in the blood that spills from John’s throat, was discovered during restoration of the work. 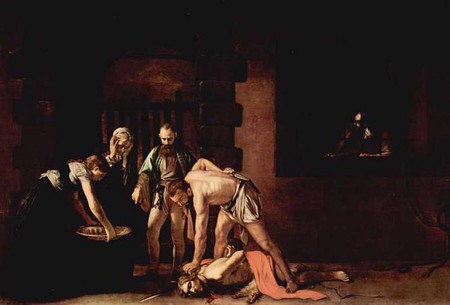 The beheading of St. John the Baptist | ©The Yorck Project/WikiCommons/Public Domain

‘Judith Beheading Holofernes’ represents the first time Caravaggio chose to depict such a dramatic subject. He captured the moment of decapitation with dramatic flair by using lighting from the side against an inky, black background. The realism of the scene is undeniable, marked especially by the facial expressions of the figures. Holofernes contorts his body and screams, while Judith’s expression reveals a mix of determination and repulsion. In fact, the realism of the painting has led some to believe that Caravaggio was influenced by the highly publicized execution of Beatrice Cenci in Rome in 1599. 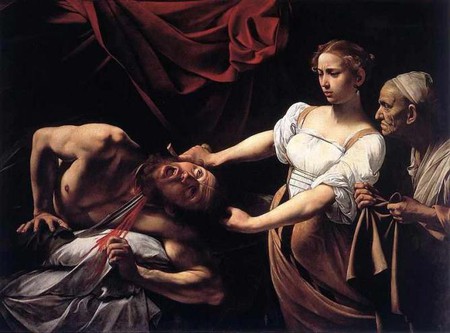 ‘David with the Head of Goliath’

For the sake of consistency – if not pleasantry – we continue here with the beheading theme and take a look at Caravaggio’s ‘David with the Head of Goliath’. Another extremely dramatic and theatrical work, David is depicted not celebrating his victory over the giant, but rather lost in thought, perhaps pondering his curious biblical connection and bond with his adversary. Another thought-provoking aspect is the fact that Caravaggio painted himself as Goliath. He had painted another version on the same theme just a few years earlier; this one, however, is much darker, shadier and more visceral in its representations. 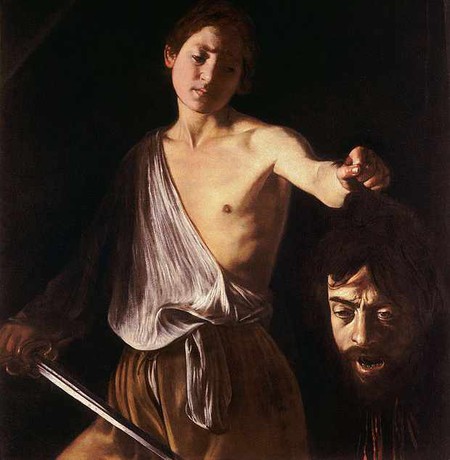 David with the head of Goliath. | © Lafit86/WikiCommons/Public Domian

Caravaggio helped make the still-life a popular artistic genre. The late 16th-century painting ‘Basket of Fruit’ is an example of the sheer effort and design that went into all his works. The basket sits at eye level and juts out over the edge of the table, threatening to fall right into the viewer’s lap. Critics have long debated the meaning behind the worm-eaten, overly ripe fruit; it’s even possible that Caravaggio simply painted what was available at the time. 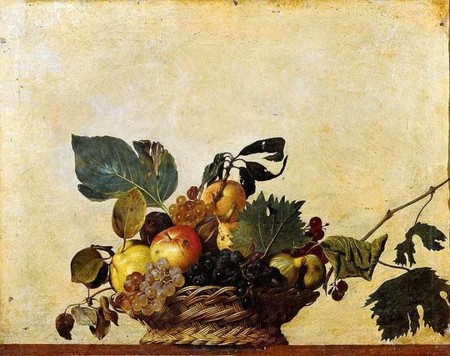 ‘The Taking of Christ’

This painting, completed around 1602 and depicting the arrest of Jesus Christ, is today located in the National Gallery of Ireland in Dublin. Aside from Caravaggio’s mastery of the lighting, color and shade, the story of the painting’s disappearance and recent discovery are notable. Considered lost by the late 18th-century, the painting’s whereabouts were unknown until 1990, when it was recognized in the residence of the Society of Jesus in Dublin. Complicating things was the fact that there are at least 12 known copies of ‘The Taking of Christ’ in all! 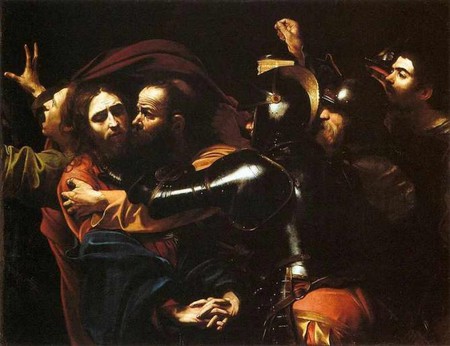 Caravaggio painted two versions of Medusa – this being the second version that is currently held in the Uffizi Gallery in Florence. The work is truly unique – it is painted on a ceremonial shield that was presented to Ferdinand I de’ Medici, who was the Duke of Tuscany at the time. The concave surface of the shield must have presented Caravaggio with a perspective challenge – one that he successfully navigated by the looks of things! 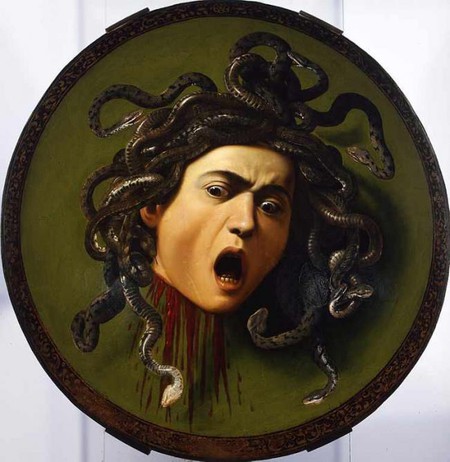