10 Artworks By Botticelli You Should Know

Italian painter Sandro Botticelli is one of the greatest artists of the early Renaissance. Having trained in the workshops of Filippo Lippi and Andrea del Verrocchio, Botticelli was a master of the techniques of perspective and foreshortening; he also had a keen sense of architectural design and anatomy. In this article, we take a journey through the 10 greatest works by this son of Florence. 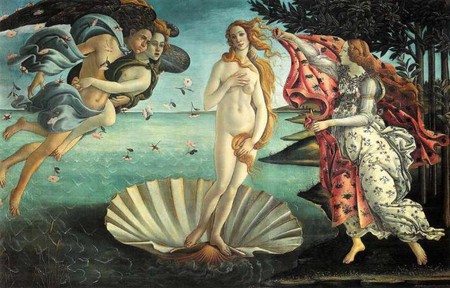 ‘The Birth of Venus’

The most well-known work by Botticelli does not portray a Christian story. Instead, it is a picture of a classical myth – The Birth of Venus. During the Renaissance, classical myths such as this one became popular among the educated classes. Likely commissioned by a member of the wealthy Medici family of Florence, the work depicts Venus as she emerges from the sea on a shell guided to the shore by flying wind gods. Botticelli deftly captures the movement of the goddess and the story of her birth, which in turn came to symbolize the birth of beauty into the world. Today, ‘The Birth of Venus’ is housed in the world famous Uffizi Gallery in Florence. 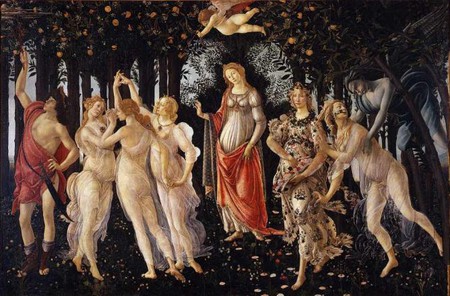 Also found in Florence’s Uffizi Gallery is ‘La Primavera’, also known as ‘Allegory of Spring’, a painting that Botticelli completed around 1482 (about four years before ‘The Birth of Venus’). The work shows a group of mythological figures in a garden, including Venus, who stands at the center of the composition. The garden’s lush greenery is an allegory for the growth brought on by the spring season; in fact, the naturalistic scene is so elaborate that there are hundreds of types of flowers and plants. 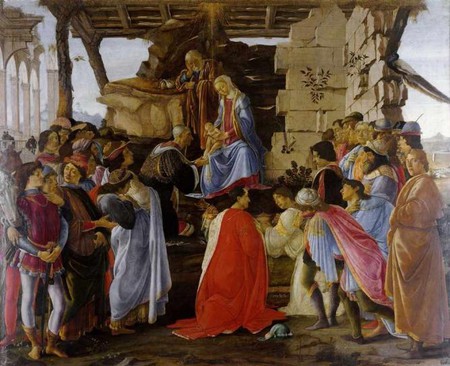 Adoration of the Magi | © The Yorck Project/WikiCommons

‘Adoration of the Magi’

Botticelli’s ‘Adoration of the Magi’, dating from 1475 or 1476, reveals one of the Bible’s most important scenes. The three Magi, or wise men, kneel in worship before the Holy Family (Christ, Mary and Joseph), offering them gifts. Aside from its religious theme, the painting portrays a few prominent figures from Florentine society, including Cosimo de’ Medici, the first of the Medici family dynasty that ruled the city. He is represented as the Magi in black kneeling in front of Mary. On the far right-hand side is Botticelli’s alleged self-portrait – the blonde man looking directly at the painting’s observer. 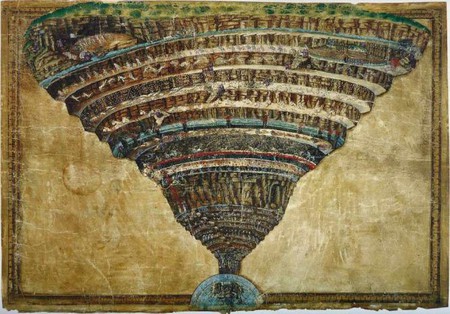 Botticelli’s ‘Chart of Hell’ is one of the most powerful visual representations of Dante’s Inferno ever made. Botticelli’s work, done with pen and brush on vellum, portrays the descent made by the poets Virgil and Dante through what the latter called the “abysmal valley of pain”. Dante envisioned hell as an abyss leading to the center of the Earth; he imagined nine rings of hell, each representing a different category of sin. The ‘Chart of Hell’ is an incredibly intricate drawing – it measures just 32.5 by 47.5 centimeters – that brings Dante’s narrative to life through imagery. Check out this interactive map to explore the chart in greater detail. 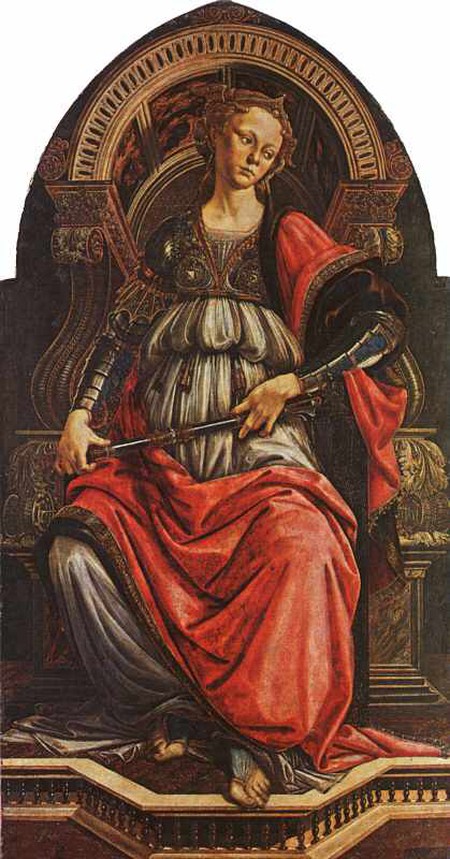 Allegory of Fortitude | ©The Yorck Project/WikiCommons

The first recorded work by Botticelli, ‘Allegory of Fortitude’ was originally part of a set of seven panels meant to decorate the high chair backs in a tribunal hall of the Piazza della Signoria in Florence. Each panel depicted one of the seven virtues – the three Christian values of faith, hope and charity, along with the four worldly values of temperance, prudence, justice and fortitude. This was the young artist’s first opportunity to show his talent, as the works were highly publicized and accessible to the general public. With Fortitude, the 25-year-old Botticelli clearly seized his opportunity, going on to complete many other high profile commissions.

Love conquers war – this is the message behind Botticelli’s painting ‘Mars and Venus’. Mars, the god of war, is asleep and unarmed, while Venus, goddess of love, is awake and alert. Botticelli was most likely influenced by a lost classical painting showing the marriage of Alexander the Great to Roxana, as described by the 2nd-century Greek writer Lucian. In that painting, cupids played with Alexander’s armor and spear, much like the satyrs who steal Mars’ lance in Botticelli’s work. Set in a haunted forest, the scene has a very compact sense of perspective. 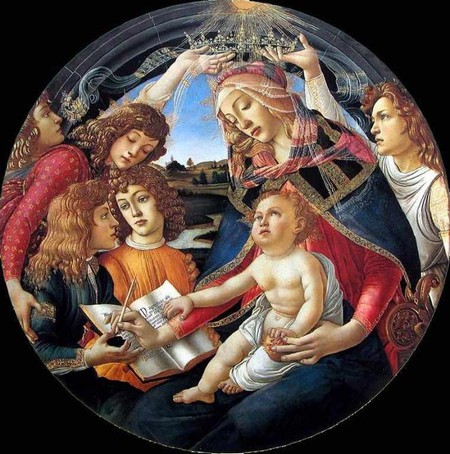 ‘Madonna of the Magnificat’

Botticelli painted ‘Madonna of the Magnificat’ in tondo, or circular form. In it, the Virgin Mary writes the opening of the Magnificat, a Christian hymn, on the right-hand page of a book; the page on the left is part of another hymn called the Benedictus. Gold paint was used extensively to detail many aspects of the work, such as Mary’s crown and the divine rays. It was even used to heighten the hair color of the figures. As a result, this was probably the most costly tondo ever created by Botticelli. 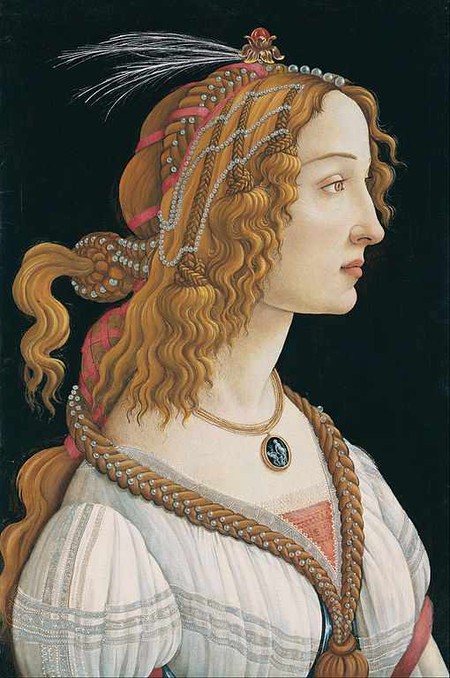 ‘Idealized Portrait of a Lady’

Botticelli’s portrait is commonly believed to be a rendering of Simonetta Vespucci, a young noblewoman who was considered the most beautiful in all of Florence. Vespucci married at 16 and died only a few years later, at the young age of 23. Nonetheless, she inspired many artists of the time – Botticelli being no exception. Some believe she served as the model for Venus in Botticelli’s most famous works, ‘La Primavera’ and ‘The Birth of Venus’. Here, the young Simonetta is mythologized as a nymph or goddess, with an elaborate coiffure that includes ribbons, beads and feathers. 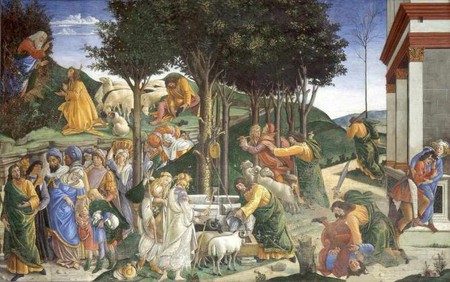 The Trails of Moses | © Erzalibillas/WikiCommons

‘The Trials of Moses’

Once Pope Sixtus IV had finished building the Sistine Chapel, he decided to call upon the best artists of the day to decorate it. One of those artists was Botticelli, who traveled to Rome to work on ‘The Trials of Moses’ between 1481 and 1482. The fresco is located on the southern wall of the chapel and shows seven episodes from the life of the young Moses. Botticelli does this with great skill by separating the scenes using four diagonal rows of figures. In each scene, Moses is easily identified by his yellow mantle and green cloak. 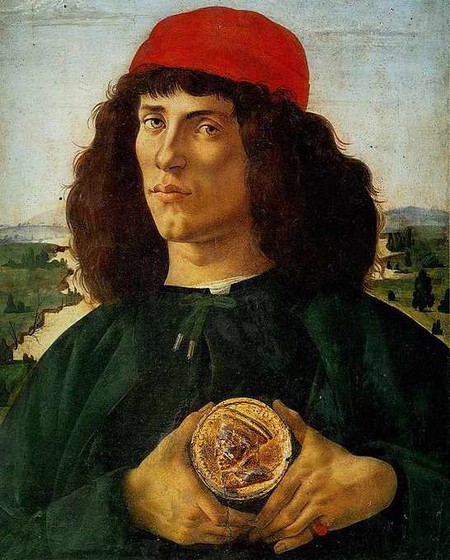 ‘Portrait of a Man with a Medal of Cosimo the Elder’

‘Portrait of a Man with a Medal of Cosimo the Elder’ is one of the most unusual portraits of the early Renaissance. The man, whose identity has long been a mystery, looks directly at the observer. This was not the common format for Florentine portraits of the time, which were usually in profile. It is also one of the earliest Italian portraits to include the subject’s hands as part of the painting. Another unique aspect of the work is the fact that Botticelli set the medal into the painting as a gilded plaster cast.