Weekend Trips and Getaways From Dublin 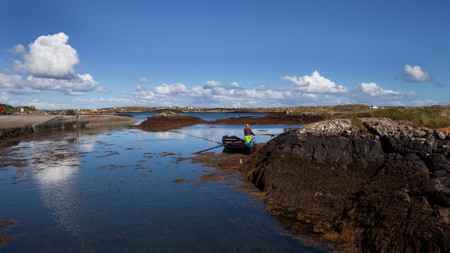 Dublin is surrounded by natural beauty, film-famous landscapes and bewitching medieval towns. While the capital promises raucous nights with the city’s witty locals and picnics on the vast green of Phoenix Park, it’s hard to resist the pull of rural treasures that sit just a train ride away. If you’ve got the urge to adventure outside the city, take a look at our dynamic collection of weekend trips.

An idyllic spread of countryside punctured by the ancient ruins, cloud-shrouded mountain peaks and jagged cliff edges, Kerry is the quintessential picture of Ireland. Take a drive along the famous Ring of Kerry route, which winds past the ice-cream-coloured houses of Kenmare town and on through Killorglin – home to the kooky goat-celebrating Puck Fair. The long-running event’s origin is a toss-up between pagan festivals or the legend of a fleeing goat that warned of the arrival of Cromwell’s army.

Strewn with the crumbling ruins of medieval abbeys and castles, Ennis is rich in history and character. The town’s picturesque centre is lined with rows of colourful buildings and pulsing pubs that regularly come to life with live Irish music. The surrounding region is a treasure trove of fossils and archaeological sites such as the Burren – a vast jigsaw of glacial-era limestone that appears like something from another planet.

Known in Gaelic as “the place of shells”, Sligo is infused with the salty air of its surfer-magnet bays. The county is a goldmine of coastal villages and rugged landscapes that sit along the Wild Atlantic Way. The cinematic scenery has found fame as the inspiration behind W.B. Yeats’ many works – with the poet even being buried near the foot of Benbulbin mountain – and more recently as the setting of Sally Rooney’s phenomenally popular novel (and equally popular TV series) Normal People (2018).

The Connemara district is a rugged sprawl of untamed hinterland and secluded, Atlantic-facing fishing villages. Tradition oozes out of every blade of grass and the cracks of Gothic Revival castles. You may hear the melody of classical Irish folk songs spilling out of traditional pubs or sit down for a hearty sea-faring meal in one of the coastal restaurants. The region is also predominantly Irish-speaking – a perfect excuse to try a phrase or two in the mother tongue.

Known as the festival capital of Ireland, Galway vibrates with the wild beat of live Irish folk music carried on the wind from characterful buskers and colourful pubs. The harbour city splinters out from its 18th-century hub of Eyre Square and is speckled with the architectural vestiges of its medieval roots. Once you’ve taken in the limestone structure of 16th-century Lynch Castle and the striking spires of the collegiate church of St. Nicholas, you should head to the Salthill suburb to try one of the famous oysters.