This Irish Prehistoric Tomb Is the Place to Be for Winter Solstice, and Here’s Why 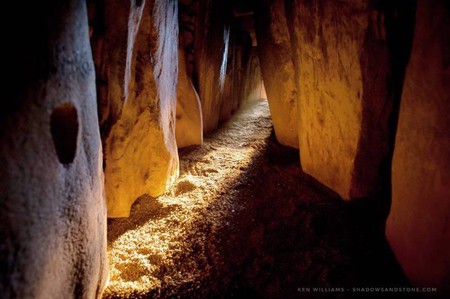 Inside the passageway at Newgrange | © Ken Williams

Ireland is home to many significant prehistoric sites, but one is particularly striking in December. Though it was built around 3200BCE, the Newgrange passage tomb in County Meath is still one of the best places in the world to spend the winter solstice – when its alignment with the rising sun allows its inner chamber to fill with light.

Although Newgrange is just one of many important monuments from the Neolithic period within the Brú na Bóinne complex in County Meath, it’s the most famous without question. Older than both England’s Stonehenge ring of standing stones and the ancient Egyptian pyramids, this 76m-wide (249ft) circular mound contains an interior passage that stretches nearly 20m (66ft) into its centre, reaching a chamber with a corbelled vault roof.

Though academics have debated the function of Newgrange, a majority of archaeologists believe it was of religious import, relating to respecting the dead. It’s generally accepted that this main inner chamber was originally used as a burial tomb – and this is where the magic happens in winter. The talented late-Stone Age builders of Newgrange were able to design it so that on the shortest day of the year, light from the rising sun would align with a specifically designed roof-box above the passage entrance.

Thanks to this deft angling, the winter solstice sunrise can shine through the roof-box and directly down the passage into the central chamber for about 17 minutes. Here, it lands on the chamber floor and illuminates the wall carvings, such as the pre-Celtic triple spiral. Although light hits the chamber around four minutes after sunrise on this day, calculations have shown that at the time of building, it would have been flooded with light the moment the sun came up.

Seeing the light enter the Newgrange chamber is a once-in-a-lifetime experience, for which crowds gather outside its entrance early in the morning every 21 December without fail. However, only a lucky few are chosen by lottery ahead of time to enter the chamber, along with a guest, to witness the phenomenon, weather permitting, of course. In 2015, heavy rain kept the dawn sunlight from entering at all.