The Top 5 Department Stores To Visit In Dublin 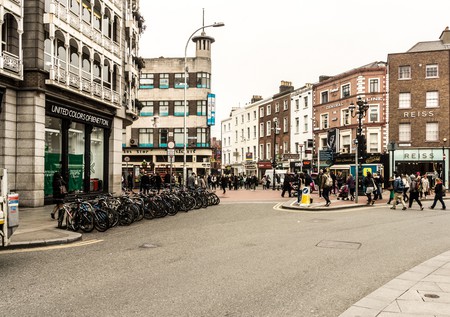 Dublin’s varied department stores offer a pleasant mix of high fashion and discount essentials, with all kinds of everyday wearables in between. From the considered haute couture at Grafton Street’s Brown Thomas to the quick-response trend-satisfying items at Penneys, here’s what to expect from Dublin’s best department stores.

Store
Facebook
Email
Twitter
Pinterest
Copy link
Share
This Henry Street landmark deserves a visit solely for its history – it’s the city’s oldest and largest department store, founded in 1843. After being taken over by the Scottish–Irish entrepreneur John Arnott in 1865 it was renamed in his honour. But Arnotts has a lot more to offer than just a good backstory. Rebuilt after a fire in 1894, the current building has a square footage of around 300,000, incorporating designer fashion, beauty, homewares and furniture, and almost anything else a Dublin shopper could ever wish for. For AW16 they’re launching an exciting collaboration with fashion designer Peter O’Brien, the former creative director at Rochas who previously worked atChristian Dior,Givenchy and Chloé.

Store
Facebook
Email
Twitter
Pinterest
Copy link
Share
Established by County Down-born entrepreneur Ben Dunne in the 1940s, Dunnes Stores now has stores across Ireland, the UK and Spain, specialising in fashion, homeware and groceries. As well as having their own well-loved womenswear label – Savida – this family-run chain runs regular upmarket collaborations with leading Irish designers like Paul Costelloe, Carolyn Donnelly and Lennon Courtney. This year, they contracted a well-known Italian retail store design company called Schweitzer – who have worked with Armani and Benetton in the past – to give their Stephen’s Green Shopping Centre store a dramatic layout revamp, in order to better showcase these collaborations.

So popular is the discount Penneys brand in Ireland that a running joke exists that the typical response to a compliment of an outfit in the country is, ‘Thanks, Penneys.’ The Irish clothing retailer first opened in June 1969 on Mary Street, Dublin under the name Penneys and, while it has since been rebranded as Primark internationally, the name is unchanged in Ireland. Famous for their low-cost clothing for men, women and children, Penneys also sells accessories and footwear, homewares and beauty products. Expect to spend very little and come out with a lot.

😍 😍 @anouskapb is rocking this super cute red pinafore! Backpack €14/$18, Pinafore €16/$18. Head over to Primark.com where Anouska gives us the lowdown on #Dublin town! #MyCityStory #fblogger #Primark

In 2007, British retailer Debenhams took over the prime retail spaces formerly operated by the national Roches Stores chain, which ceased trading that year after over 100 years in business. Today, Debenhams Ireland operates four stores in Dublin and two in Cork, as well as outlets in Galway, Limerick and Waterford. Also strong in beauty, gifts, and interior items, the Debenhams fashion department runs an impressive Designers at Debenhams portfolio, working with big names like Henry Holland, Julien Macdonald and Ireland’s own John Rocha. Though the store briefly entered examinership earlier this year, a plan has since been formulated to save it, much to shoppers relief.