The Top 10 Things To Do in Waterford, Ireland

Waterford is a beautiful medieval city located on Ireland’s south-eastern coast. While it can often be overshadowed by larger cities such as Dublin and Galway, there is plenty to see and do here. Check out our list of the very best ways to spend your time in this underrated Irish gem.

One of the most significant buildings in Waterford, Reginald’s Tower has been in continuous use for more than 800 years. Initially built as a defensive structure by the Vikings, it was subsequently rebuilt by the Anglo-Normans in the 12th century, and expanded by two floors later in the 15th century. The tower takes its name from Ragnall MacGillemaire, an Irish Viking who ruled the town before being imprisoned by the Anglo-Normans following their conquest of Ireland. During the 17th and 18th centuries, the tower functioned as a munitions storage facility, before becoming a prison in the 19th century. First opened to the public in the 1950s, the tower now hosts an exhibition on the Viking history of Waterford.

The centrally located Garter Lane Arts Centre mainly focuses on the development and promotion of local acts, and always draws a strong crowd from the surrounding community. Some performances are put on free of charge by volunteers and there is always something new to explore by anyone who wants to drop in for a few hours. The centre is also used to screen a diverse range of films, so it’s worth checking what’s on in advance.

Historically synonymous with quality, Waterford Crystal has gained a well-deserved reputation for its exquisite crystal production, having manufactured everything from sports trophies to the chandeliers in Westminster Abbey. Operating out of The Mall in Waterford City, visitors are given the chance to take a guided tour of the factory and see how the process of creating such works of art is undertaken for themselves. You are also given the opportunity to purchase some of the famous crystal for yourselves at the attached retail store. There is also a very popular cafe within the facility serving excellent food created from the finest local ingredients. 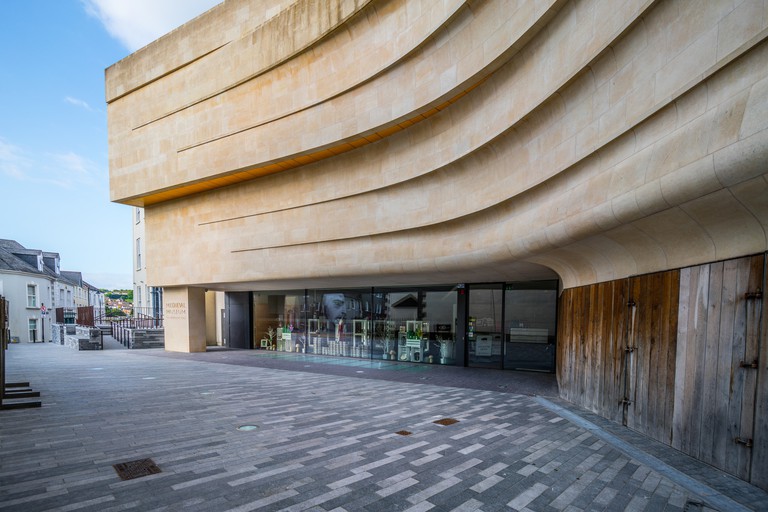 Waterford’s Medieval Museum | © William Murphy / Flickr
The only museum in Ireland dedicated specifically to the medieval period, here you will find a host of objects that hark back to a time that remains partially shrouded in obscurity and myth. Waterford is the oldest city in Ireland, founded in 914 by Viking raiders who sought to establish settlements on the coast to aid their travel and trade across Europe. There are therefore a host of objects, ranging from swords to expertly woven clothing, dating back to this period on display here. At the Medieval Museum, you can take a guided tour to discover the illustrious history of the town and the many changes it underwent as it shifted from Viking to Anglo-Norman control.

People’s Park is the largest public park in Waterford, attracting everyone from local dog walkers to foreign sightseers. It opened in the mid-19th century, thanks largely to the donations of local citizens and volunteers. Within the park, visitors will find a cafe, cycle track, skateboarding park and a bandstand dating back to the Victorian period. Local events, markets and festivals are frequently held within the grounds, so lucky visitors may get a chance to experience even more local Waterford hospitality if they stop by during the summer months.

An intimate and personal tour of the city by a native, this tour has been in operation for more than a quarter of a century, and is still going strong. Jack Burtchaell himself is a scholar of history, who brings a witty and engaging personal touch to the tour as you are taken around the various historical sites the old city has to offer, from national monuments to reverent religious memorials. The tour kicks of at the Granville Hotel and lasts for approximately one hour.

Built in 1793 by the highly acclaimed architect John Roberts, Waterford plays host to the oldest Catholic cathedral in Ireland, which is officially known as the Cathedral of the Most Holy Trinity. Refurbished as recently as 2006, here you will find a functioning expression of faith in a much more personal and quiet setting than you would in Dublin or any other larger city.

Established over 200 years ago, the Theatre Royal is the cultural heart of Waterford and continues to play a vital role in the local community. All manner of shows and concerts are performed at this intimate and professional venue, with both Irish and overseas performers dazzling the crowds. There is also a walking tour on offer, which allows you to visit behind the stage and take a gander in the nooks and crannies of an authentic Georgian performing house that has largely remained unchanged since its inception.

This very impressive Georgian manor and estate, built in the 1760s, features 70 acres of meticulously planted and maintained gardens, in addition to a separate four-acre garden surrounded by walls – all of which are fully accessible to the public. There is a quaint coffee shop on the grounds, and visitors can book guided tours if they wish to learn more about the history of the area, or the immeasurably diverse kinds of flowers on display. The Mount Congreve gardens serve as a perfect getaway for a few hours before heading into the city proper.

Right across the road from Waterford Crystal is the superb Bishop’s Palace Museum, which tells the long and fascinating history of Waterford City from the beginning of the 18th century right up until the 1970s. The building itself was designed by the esteemed Anglo-German architect Richard Cassels in 1741, and within its walls are housed a host of artefacts and paintings that spell out the story of the city and its inhabitants over the centuries. One of the museum’s most notable objects is the Penrose Decanter, the oldest piece of Waterford crystal still in existence, which dates back to 1789.