The Best Things to See and Do in Galway, Ireland 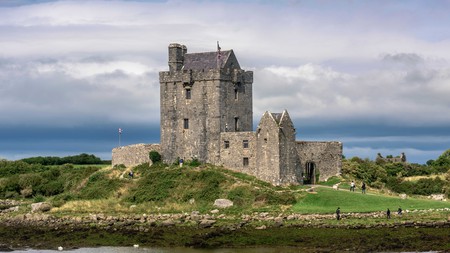 Galway is perhaps the most beautiful urban area in all of Ireland and is a hugely popular destination for travellers. It is therefore no surprise that there are loads of things to see and do in the medieval city, here are some of the best options.

Historical Landmark
Facebook
Email
Twitter
Pinterest
Copy link
Share
Map View
This beautiful 16th century tower house, built by the O’Hynes clan, can be found on the southeastern shore of Galway Bay, near the small port village of Kinvara, and easily reached by walking from the town. It was restored in the 20th century by Oliver St. John Gogarty, a prominent literary figure, and became a venue for meetings of Celtic cultural revivalists including the likes of William Butler Yeats and George Bernard Shaw. Dunguaire Castle is now owned by the government and is open to the public all year round, with additional local entertainment and lavish banquets provided during the summer months.
Open In Google Maps
Dungory East, Kinvarra, County Galway, Ireland
+35361711200
Visit Website
Give us feedback

Theatre
Facebook
Email
Twitter
Pinterest
Copy link
Share
Map View
Translating as ‘Galway Theatre’ in English, this is the National Irish Language Theatre. It was founded in the midst of the Irish revival movement in the late 19th and early 20th century, whose figureheads included the likes of the poet William Butler Yeats and political activist Patrick Pearse. A must visit site for all those interested in traditional Irish drama and theatre, the site itself was built upon the remains of an Augustine friary dating back to the early medieval period.
Open In Google Maps
19 Middle Street, Galway, County Galway, H91 RX76, Ireland
+35391562024
Visit Website
Give us feedback 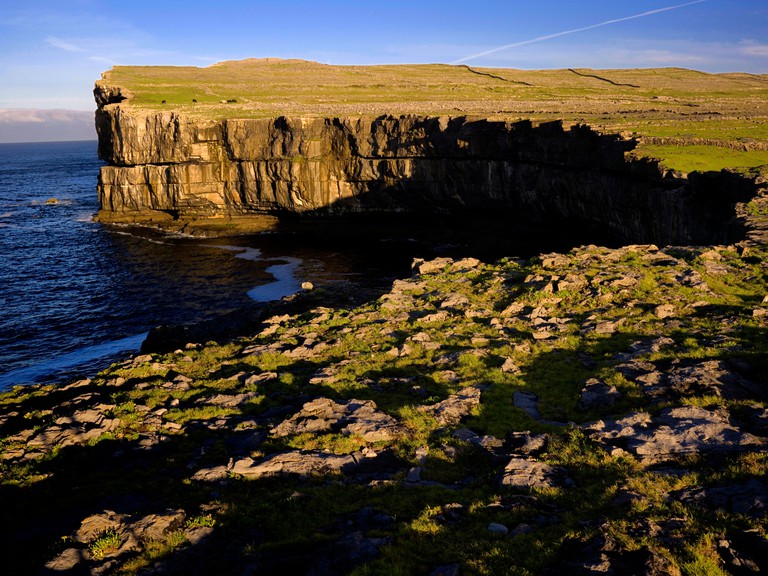 Inishmore Aran Islands Galway Ireland | © scenicireland.com / Christopher Hill Photographic / Alamy Stock Photo
Accessible via a short ferry trip from Galway Bay, the three ruggedly beautiful Aran Islands feature ancient ruins of churches and monuments, as well as extremely hospitable locals. Visiting the islands is like stepping back into a time before globalization and commercialization. Listen to some traditional Irish music, purchase some handmade crafts and gaze out into the immensity of the Atlantic Ocean before heading back to modernity on the mainland.
Open In Google Maps
Oghil, Inishmore, County Galway, Ireland
Give us feedback

Art Gallery, Bookstore, Park, Shop
Facebook
Email
Twitter
Pinterest
Copy link
Share
Map View
Initially established as a humble family-run book shop during World War II, the owners soon branched to include arts and crafts. The Kenny Gallery now plays host to both an extensive art gallery, which makes tremendous effort in showcasing the best of local and internationally acclaimed artists, as well as a huge bookstore, which now contains more than half a million titles spanning all genres and interests. The bookshop’s website was launched back in 1994, making it only the second bookshop in the world to have an internet presence.
Open In Google Maps
Liosban Business Park Tuam Road, Galway City, County Galway, Ireland
+35391709350
Visit Website
Give us feedback 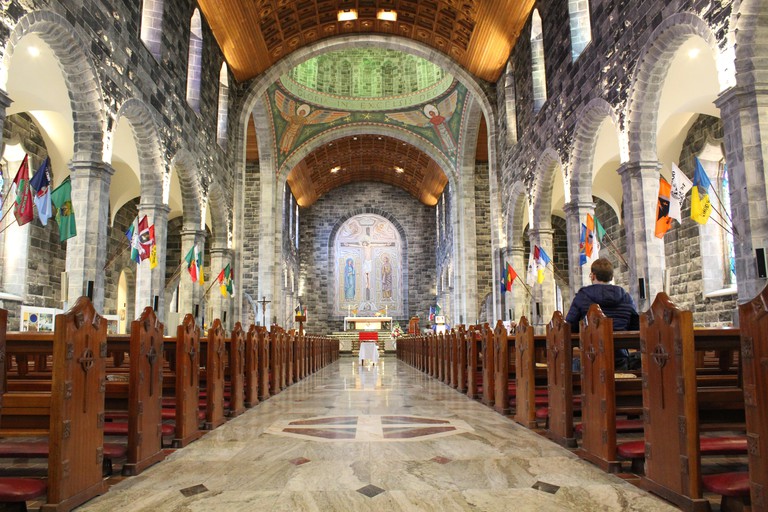 Galway Cathedral alter in Ireland | © Daniel Bradley / Alamy Stock Photo
One of the most imposing buildings in the city, the Galway Cathedral is a relatively recent construction that was completed in 1965. It is situated on the site of a former prison, and its style and architecture gives off the impression that it is much older than it actually is. If you are lucky, you may get the opportunity to hear choirs rehearsing or performing hymns and songs to the accompaniment of traditional Irish melodies.
Open In Google Maps
Gaol Road, Galway, County Galway, H91 A780, Ireland
+35391563577
Visit Website
Give us feedback

Park
Facebook
Email
Twitter
Pinterest
Copy link
Share
Map View
This public park dwells at the very heart of the city, and its earliest manifestations date all the way back to the 17th century. It more recently underwent a massive redevelopment program that was completed in 2006, and is now one of the most beautiful parks in the country. The park is officially known as the John F. Kennedy Memorial Park, in honor of the visit and speech made there by American President Kennedy in 1963, but locals and tourists alike generally refer to it as Eyre Square.
Open In Google Maps
Eyre Square, Galway, County Galway, Ireland
+35391536400
Visit Website
Give us feedback 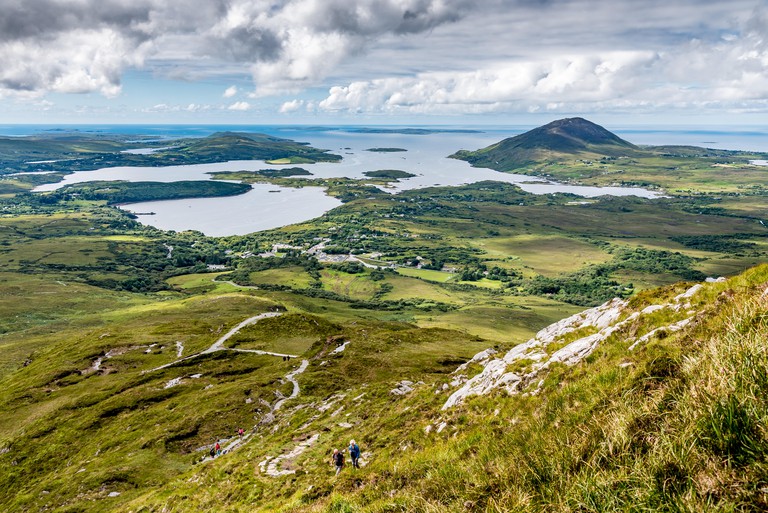 Connemara Coast Landscape seen from Diamond Hill in Connemara National Park, Ireland | © Louis-Michel DESERT / Alamy Stock Photo
Of the six national parks of Ireland, Connemara may well be the most beautiful. Opened in 1980 amid much fanfare, the park spans 2,957 hectares of boundless mountains, lush grassland and thick forests. The park is noted for its diverse range of birds, which has led to it being described as a bird watcher’s paradise. There are also numerous ancient megalithic and neolithic burial mounds and tombs, which offer a glimpse into Ireland’s prehistoric period.
Open In Google Maps
Letterfrack, County Galway, Ireland
+353761002528
Visit Website
Give us feedback 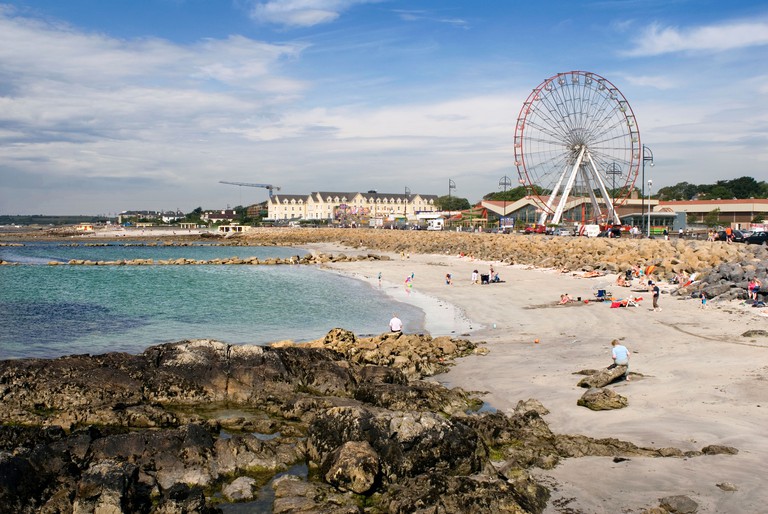 Salthill, Galway, Ireland | © Paul Lindsay / Alamy Stock Photo
Consisting of numerous smaller beaches separated by outcrops, rather than one long singular beach, Salthill is a hugely popular spot for swimming and relaxation during the summer for locals and tourists alike. Salthill is ranked as a Blue Flag beach, which means it meets the very high standards of environmental quality and safety set out by the prestigious Foundation for Environmental Education. The weather in Ireland might not always be optimal for the beach, but when it is you will find no better spot to kick back and enjoy.
Open In Google Maps
Salthill, County Galway, Ireland
Give us feedback

Museum
Facebook
Email
Twitter
Pinterest
Copy link
Share
Map View
Constructed in 1584, the Spanish Arch was originally an extension of the city’s defensive walls that was specifically designed to protect the quays from looting. In the past it was known as ‘the Blind Arch’, and it gained its current name due to the usage of the quays by Spanish traders during the early modern period. The arch was partially damaged by a tidal wave generated by the 1755 Lisbon earthquake, but it still remains largely intact. It is now one of the most iconic historical record of medieval times in the city and features a wooden sculpture known as the Madonna of the Quays, which was sculpted by the well-known local artist Claire Sheridan. It is also home to the Galway City Museum.
Open In Google Maps
2 The Long Walk, Galway, County Galway, Ireland
Visit Website
Give us feedback

Museum
Facebook
Email
Twitter
Pinterest
Copy link
Share
Map View
Offering an insight into the history and culture of the city and its people, Galway City Museum can be found on the banks of the famous River Corrib. Featuring an ever-changing set of exhibitions focusing on various aspects of local heritage and development, spending a few hours here will help any visitor gain an understanding of how the town came into being, and why it has retained its unique regional flavour which embodies the West of Ireland, clearly distinct from all other parts of the country. Artefacts range from prehistoric tools to modern art, all of which has helped shape Galway into what it is today.
Open In Google Maps
Spanish Parade, Galway, County Galway, H91 CX5P, Ireland
+35391532460
Visit Website
Give us feedback
Give us feedback