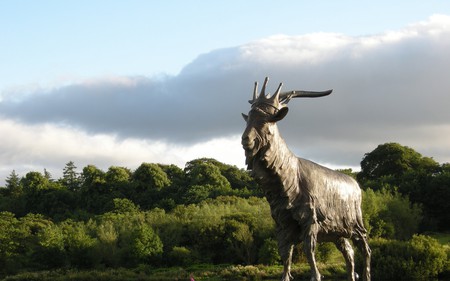 Every August, a town in County Kerry spends three days in celebration – of a goat.

Gathering visitors from across the country, the town of Killorglin, in County Kerry, is swamped far beyond its everyday population of just over 2,000. Guests at the Puck Fair arrive to welcome their temporary new king – ‘poc’, a wild goat captured from the nearby hills.

The whole thing sounds like the start of a fairytale, or the result of some hallucinogenic medalling with the water supply. In fact, it’s one of Ireland’s oldest ongoing festivals. Puck Fair is an annual celebration that can trace its roots right back to the year 1603 and is firmly embedded in the culture of the town of Killorglin.

The statue of a ceremonial King Puck, pictured below, stands permanently in the heart of Killorglin, but the bizarre festivities see locals capture a new wild goat each year. The goat is ‘crowned’, put atop a high stand at the centre of the fair for three days (where he’s fed and watered, animal lovers), and then returned to the wild, his role as temporary ruler over the Kerry town fulfilled. 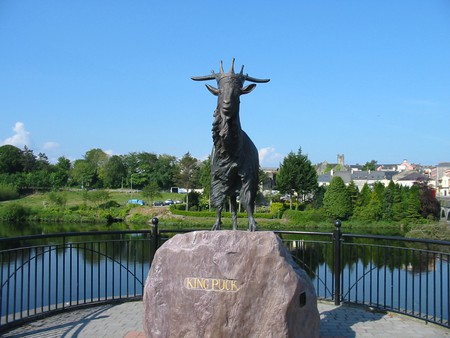 There are a number of possible origin stories for this surreal ritual. One insists that a goat ran from his herd to the town to warn of the impending arrival of Oliver Cromwell’s invading army in the 17th century, though quite how that warning was communicated is unclear. The fair pre-dates that particular moment in history by almost half a century, but it was previously known as ‘August Fair’, so the purported connection with Cromwell and his Irish raids can’t be ruled out completely.

A more broadly accepted theory is that the festival links in with the Celtic festival of Lughnasa. The pagan festival pre-dates Christianity in Ireland, and traditionally takes place about half way between the summer solstice and the autumn equinox, in early August. In this retelling of events, the goat is linked with the festival as a symbol of pagan fertility.

Puck (from the Irish ‘poc’), incidentally, translates to male goat. When crowned king, the creature is connected with ‘Queen Puck’, usually played by a local school girl who is also wearing a crown. Taken from the final year of primary school – making the girl typically 10 or 11 years old – the ‘queen’ has to go through a written selection process.

The first festive ritual takes place on August 10th each year, with the coronation signalling that the fair can get underway. The Puck Fair then runs until August 12th, with the dates remaining the same regardless of which days of the week they fall on each year.

There’s plenty more to uncover besides the goat’s reign too. 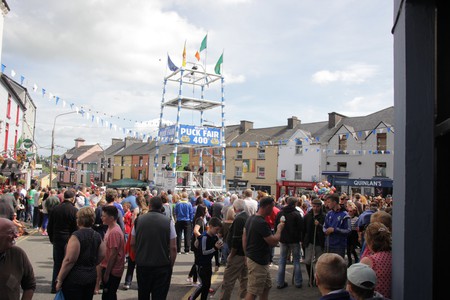 The event has two annual parades, focused around the crowning and then the dethroning of King Puck. While the goat is the heralded star of the parade, the float also highlights local businesses and sports clubs, schools and entertainers, and is as important locally as the national St Patrick’s Day events. The closing event – called ‘scattering day’ – ends with the ‘thanked’ goat returned to the hills around the town.

As well as the parades, there’s plenty of live music (much of it traditional), as well as horse and cattle fairs. In fact, the latter fairs have become one of the event’s major draws, and – aside from the tourism angle – the source of its economic success. There’s a craft fair incorporating everything from sunglasses to herbal remedies to explore. There are also fireworks on Saturday night, as well as circus, drum and pipe workshops, puppet shows and street performances.

The quaintness is not atypical of Kerry, a part of Ireland well known throughout the country as being both starkly and stunningly beautiful but also traditional, and different, perhaps because it’s so rural. It’s common for local pubs to have a secondary business, such as a hardware store or corner shop. The county football side is bordering on religion. But Puck Fair has also become important in Killorglin: the Puck Fair website goes so far as to say that the festival is ‘the main social, economic and cultural event in the Killorglin calendar.’

Get a short taste of the Puck Fair from this 2015 video released by the festival. In it, the local responsible for capturing the goat recounts his experience and talks about how the coronation takes place, all before you explore the early hours of the festival: