The Stars Of Sing Street On Fame, Dublin And The Film's Ending 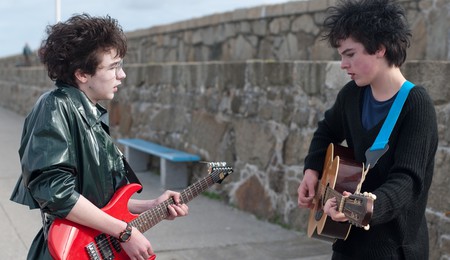 Sing Street, the Dublin-set musical drama that was released earlier this year, continued the run of success for Irish director John Carney. Just like Once and Begin Again, music is core to the story. We spoke exclusively to the movie’s stars Ferdia Walsh-Peelo and Mark McKenna about fame, the challenges of filming in Ireland and their take on the ending of the movie.

“It’s been a mad few years, everything has changed… in a great way,” says Walsh-Peelo, who plays Conor, the frontman of the band at the heart of the film. He’s ably supported in the movie by McKenna’s Eamon, with the teenagers forming a group to take on the world – or at least the school bullies and teachers that torment them.

Both youngsters came to the project as musicians, but things are changing rapidly for them now that the film has been an international hit.

“I’ve now got a love for acting that I didn’t see coming. I’m pursuing that whilst doing this press tour, haven’t been in school as that’s gone out of the window. Music was my first passion, but I am now focussing on acting as that’s working out for me. I don’t want to rush myself as i’m only sixteen and have been writing for two years,” Walsh-Peelo tells The Culture Trip.

Having seen the film, and now met Walsh-Peelo in person, it’s easy to forget the lad is only 17. Even over the course of the movie itself, you can see him change considerably. 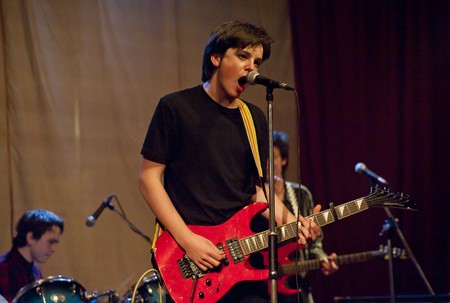 “At first the shoot wasn’t huge, but I matured so much throughout it all. I was living an adult life for the first time, living a proper life in an apartment. Then I went back to school for an exam, and that was a bumpy ride. I missed about two months of school and then went back for reshoots which was like a tease of that life again. I’ve taken the next year out and here we are now.”

The boys met for the first time on set, already decked out in their 80s-influenced attire. “I asked Mark what sort of music he was into and he said ‘do you know The 1975?’ and I marked out!” 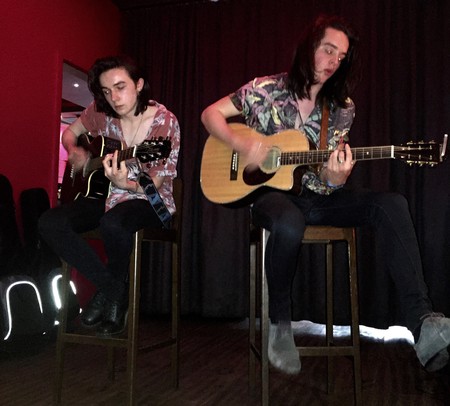 “Yeah, it’s a good way to meet someone for the first time, in costume. You see past the skinny jeans! That’s going to be on Ferdia’s autobiography,” McKenna jokes.

Mark is slightly older, yet together the pair make for a wonderfully believable combination, which makes one wonder if the musical collaboration has continued after filming.

“We play together when doing stuff on the press tour, but in terms of writing together we both have very different tastes. Ferdia is more into acoustic folk songs and I’m more into 80s pop. In the movie though, if the music wasn’t right, John [Carney] would not have made it. It had to be just right. They wrote the songs before he cast us. We spent two weeks recording the soundtrack before the shoot,” adds McKenna. 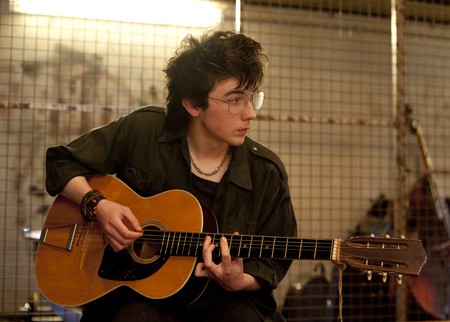 “I think my love for 80s music came from being mad into punk. When I say punk, I mean pop punk like Paramore and Fall Out Boy. The lead singer of the latter released his own solo album and that was very 80s. I listened to that and preferred it to everything else he did, so I carried on from there.”

Carney was a bassist for Irish rock band The Frames, directing some of their video promos, before going on to make a series of films. His breakthrough was the award-winning Once, starring The Frames frontman Glen Hansard, and his follow-up, Begin Again, was set in New York with Mark Ruffalo and Keira Knightley in the lead roles.

In a previous interview Carney has spoken about not being satisfied with the ending he shot for Sing Street. Walsh-Peelo, who is last seen in the film sailing off to a new life in England with Lucy Boynton’s character Raphina, was surprised to hear this.

“Really? When we were shooting it I thought it was mad. I was seeing it a different way I guess at the time. Now I love it. Totally love it. It’s not trying to be too realistic, I guess it is like a music video with us heading off into the great big ocean. You want to feel good and get so immersed in it.” 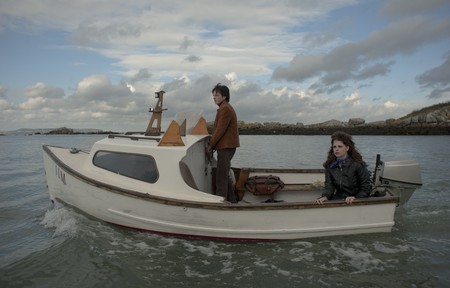 McKenna agrees, adding that it would have been odd to have it any other way.

“Imagine after this great big adventure us just say ‘and then he just stayed at home with his mum and dad!’ When people watch films like that, not just Sing Street, they complain about the ending after getting into the rest of the film. I feel like saying just let people enjoy it.”

So what was it like for McKenna to see his home town on screen?

“It was nice seeing Dublin dressed up in that style of the 80s. A lot of it was actually filmed in south Dublin and I’m from the very north of Dublin. I rarely get down there actually. For some reason, the North and South just hate each other. They are very different areas. North is more estates and South is more coastal villages. There are some super-posh areas like Dalkey but it’s not like we sit there wishing we could switch lives or anything. There is an Irish mentality, and one in Dublin, where you say that the crapper the area you grew up in, the cooler you are. Kids have that competition to see who is from the worse area, and the ‘winner’ is the one who lives in the worst bit, and he’s the coolest.

“Calling someone posh is still seen as an insult and I’ve never understood that. Why are you hurt because someone ended up living in a privileged area? I guess it’s more of a running joke now.” 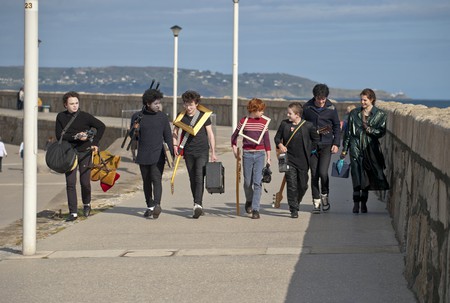 The Dublin Coast as featured in Sing Street (Lionsgate)

Walsh-Peelo also told us about what it was like starring in a movie.

“I was so scared. I could have been the worst actor ever and been absolutely horrendous in it. I had no clue. I was blown away by it though and how it all came together. There is other stuff that you pick up in the industry. The first time I got a tweet slagging me off I was like ‘that kind of hurt my feelings’, but then you just move on. It’s just an opinion.

“It was great having Jack [Reynor] on set for the film. I had a lot of one-on-one scenes with him as he plays my older brother. I learned so much from him and being under his wing. He’s also a lot of fun and I’m still in touch with him and ask him about stuff. We both related to the story and the parts we played. I have two older brothers who also inspire me, so it was a very personal film to me.”

Carney has found a unique way of presenting music on film. Not quite musicals, at least not in the conventional sense, his films still have songs and lyrics integral to their plots. McKenna thinks there is a reason why Carney’s films succeed where others have failed.

“It’s to do with the formula of secrecy in musicals. This wasn’t like in High School Musical, for example, where someone says ‘we’re all in this together’ and then someone else says it and they all get up and sing it. I think that is what turns people off. We did it in a way of presenting what they are trying to do and then seeing them do it. John gets a really good balance between the singing and cutting it in a biographical movie type way.”

One of the highlights in the movie is seeing the band perform together as they make a music video in the alleyways and backyards of their home town. Was it as much fun to film as it looked like on screen?

“That was hilarious!” McKenna says to Walsh-Peelo. “That was very on the spot. John just said ‘someone do a spin’ and then he’d use that. He kept on saying it looks so bad. We were filming on these tiny 80s cameras and John would use things from rehearsals in the actual shoot that we did.” 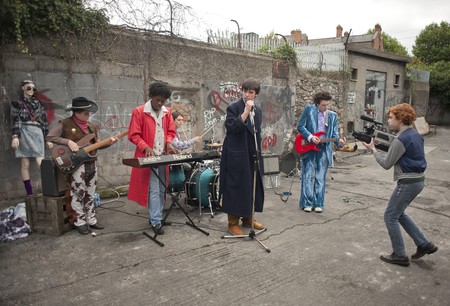 Filming a music video for real in Sing Street (Lionsgate)

Both young stars chose ‘Drive It Like You Stole It’ as their favourite song from the movie. Like everything we hear on the soundtrack, it sounds convincingly produced as if sung by band who have been working for years.

“I think that was another thing that John did really well. He felt like ‘would you really want to see half an hour of them struggling to put a few verses together whilst sounding crap?'” McKenna says.

Walsh-Peelo adds, “He’s right. It is a fun film and you don’t want them to be a crap band. You want the music to take you to another place. The studio version, and the drums on it, were perfect. There was a way of Conor hearing the proper version of it in his head. I love that scene because it changes slowly to the studio version because in your head you hear it as a perfect version when you are playing with a band.”

Both Walsh-Peelo and McKenna are now with agents and auditioning for other roles. They are both learning and want to take their time to make this their career.

“I’m sure my agent would want me to move to LA. I don’t think I want to live out there…” Walsh-Peelo says, with a quizzical look coming towards us from his mother who walks in just as we end our interview.