The Oldest and Most Famous Pubs in Ireland to Visit 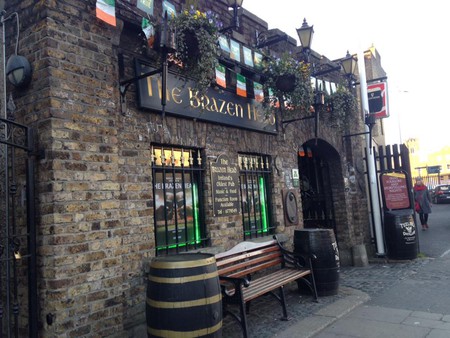 Ireland’s pub scene is internationally notorious, and with good reason. And no, it’s not because everyone goes out every night (they don’t), though the pubs are a vibrant part of every community, the ‘local’ (community pub) being a revered establishment at the heart of neighbourhood action. Naturally, some pubs are better than others. The best are often old, creeky and full of charming nooks and crannies, perhaps a centre of the fantastic Irish trad music scene, or simply the place to get the best pint (yes, we take our beer extremely seriously). So where are the very best? Here are our favourite pubs in the entire Emerald Isle, from the very oldest (something we can’t all agree on), to the ones that simply have so much history you can’t ignore them. Sup away…

Sean’s Bar is not just the oldest pub in Ireland (unless you ask the lads in the next entry), but recorded in the Guinness Book of Records as the oldest pub in all of Europe (it may very well be the oldest pub in the world, in fact). Located in Shannon-side Athlone, it’s a simple and rugged place with little glam to it, but a fantastic and vibrant beer garden and an enthusiastic clientele. Astonishingly, the bar predates the 12th-century Norman Castle that sits almost next door by more than 200 years, with its stone-clad walls able to remember Ireland before the country could even be considered such a thing (it was a collection of kingdoms). The Guinness is excellent, and you could spend an hour just reading the walls. Oh, that opening date? Roughly the year 900.

The Brazen Head’s own website claims that it, in fact, is the oldest pub in Ireland, though given it also states its opening date as 1198, that’s obviously highly arguable. It’s more than old enough, of course, and while the Brazen Head has countless beautiful signs of aging, it’s not clear how much of the original structure actually stands. You will find some century-old graffiti on its walls (ask the barman to point it out), while its rugged walls are also famed for the music that bounces off them. Old regulars include writers James Joyce, Brendan Behan and Jonathan Swift, as well as noted revolutionaries such as Robert Emmet, Wolfe Tone, Daniel O’Connell and Michael Collins. You’ll find the best in traditional Dublin dishes on the menu, too.

Another truly ancient pub, Kyteler’s is nothing short of spectacular, one wall in particular feeling a lot like staring out from the interior of an old castle, with stained glass windows, wooden shields, swords and animal heads. This spot dates back to 1324, and trades as a ‘medieval pub’, though the food is more of a nod to Irish farm tradition, and the beer close to the typical when it comes to what you’ll find around Ireland. Well worth a stop off for the music, the alleged resident ghost and the architecture.

Not as spectacularly old as the previous three entries on this list, but The Old Thatch is no slouch, having opened way back in the 1700s. This is a proper Irish village pub with all the little quirks you’d want from such a place and tucked well away from the tourist trail. Named for its thatched roof, this spot was once denied a licence on the basis it harboured Irish nationalists (those days are long gone, of course) and has been owned by the present owners for almost as long as its existed. A place to savour, then.

There are plenty of pubs older than O’Donoghue’s in the capital, but its history is pretty difficult to match. Renowned as a world-class music pub, the trad sessions held in their front bar are legendary, once the preserve of iconic Irish trad act The Dubliners, who all but launched their career here. The pub feels untouched since their time, with those nightly sessions still firing ahead, the Guinness flowing, and the back room so old-school it almost feels like a Victorian classroom rather than a bar. You can even stay here, though unless you’re planning to have a few, we’re not sure we’d recommend it. Pro tip: there’s a sweet spot where the wall meets the bar on the right as you walk in, where the floor rises a few inches. Perfect for a view of the musicians on a crowded night.

Perched on a Belfast street corner, McHugh’s is very much in the old-Irish vein, with regular trad sessions, huge footfall and a phenomenal line in whiskey. Located in one of the oldest buildings in Belfast, this spot has been a pub since sometime early in the 18th century and contains huge wooden ceiling beams and an ever-vibrant evening clientele. For all the frolics, though, the building is registered for national protection, and the food is also starting to impress. A top spot for a taste of the Belfast of old.