Dressing the Dancers: The Changing Face of Traditional Irish Dance 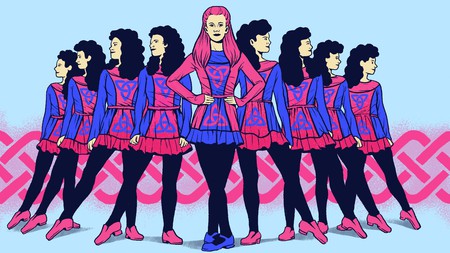 When Riverdance was launched onto the world stage, it changed everything for Irish dance. Here, a group of experts explain the part played by costumes.

On 30 April 1994, aspiring pop stars from across Europe descended on Dublin for the 39th Eurovision Song Contest, hoping for a chance to wow the audiences and grab the traditional 15 minutes of fame. As it turned out, none of that year’s entrants would set the world alight – but the performers who took to the stage at an interval were a different story. Dancers Jean Butler, clad in a glittering, shoulder-baring black dress, and Michael Flatley, wearing a brightly coloured, flowing silk shirt, became household names almost overnight.

Riverdance was a seven-minute spectacular that showcased Irish dancing in a way that had never been seen before, and its impact across the globe means that the dance has never been the same since. Not only did the performance reinvent Irish dancing for a new generation, it also ushered in a new era for Irish dance costumes – Butler’s black dress was worlds away from anything dancers had worn before.

Former Riverdance performer Niamh O’Connor recalls the effect that the showcase had on the dance. “Riverdancing was seen as cool and sexy. It didn’t feature ringlets and long skirts. It had a huge impact on the costume of Irish dance.” 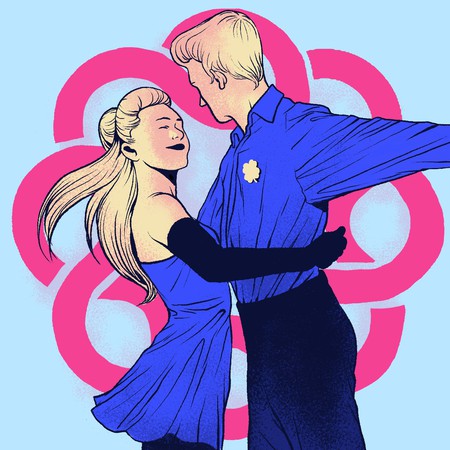 Niamh began dancing at the age of four and quickly progressed onto the competitive circuit, where she was awarded fourth in the world. At 18, she joined the Riverdance troupe with whom she performed around the world for almost two decades, working with original Riverdance star and choreographer Michael Flatley. During her career, she has witnessed the evolution of Irish dance costumes – the sleek ensembles of Riverdance being very different from the traditional costumes of her youth.

“Every Irish dancing school has a class costume that everybody wears. When I started dancing, they were made in heavy fabrics in jewel colours, then heavily hand-embroidered with Celtic designs. A lot of these designs would come from the Book of Kells. The dresses were made of heavy velvet or wool and fell to the knee. Tweed was used for the boys’ kilts, with a velvet jacket, and then a velvet shawl on the back held together with a Tara brooch.”

It’s a far cry from how young dancers in feiseanna (Irish dancing competitions) dress today, where girls of all ages commonly compete around the globe in brightly coloured attire, immaculately curled wigs and dramatic stage make-up.

However, this is just the most modern interpretation of Irish dance. Thousands of years before the heavy velvet dresses, before Riverdance took to the world stage, Celtic druids performed sacred dances as part of their religious rituals. At the Hill of Tara, the ancient seat of the High Kings of Ireland, a great festival known as the Aonach took place every year, drawing in the greatest singers, poets and, of course, dancers of the land.

The 12th-century Norman invasion further influenced and formalised dance traditions. By the 1700s, dancing masters travelled throughout Ireland to teach the craft, with dancers performing in crowded pubs and homes, often on a tabletop or a door that had been laid on the ground. It wasn’t until the turn of the 19th century when modern Irish dance, in a form that would be recognised today, became visible. In 1929, the Gaelic Dancing League was founded, and it was during the 1970s and ’80s that Irish set dancing became hugely popular. Costumes would not have evolved drastically through these decades as they were handmade, and dancers kept them for years, meticulously altering them and passing them down to the next generation.

The power and speed with which the Riverdancers moved not only revolutionised the method of dancing, but it also called for different garments than those worn in times gone by. Gone were the heavy, handmade costumes Irish dancers had worn for decades and in swept shorter, tighter, aerodynamic designs that were as eye-catching as the dynamic choreography.

“The physicality of Irish dance changed. It had become a lot more athletic, so the costumes changed, too. The heavy velvet just wasn’t working anymore. The new Irish dance costumes needed lighter fabrics,” says Niamh. “Originally the dress designs were drawn on tracing paper and sewed by hand. In the late ’90s, they started digitising designs that worked in sync with machines so people could machine embroider, which was amazing. They were lighter, quicker, and there was a bigger turnout. The only downside was we sort of lost the very traditional Celtic designs – they became more geometric modern designs.”

This evolution of both dance and dress is something Nicola Byrne can also attest to. A former Riverdance performer, she joined the troupe in 1999 and danced in the lead female role from 2006 until 2009. She now runs Malley Sport with her husband, and they are one of the leading producers of Irish dance costumes in the country.

“The fabric and manufacturing technology that became available meant that simultaneously, the whole thing evolved. If you had a lighter costume, it gave you freedom of movement so you could jump higher and move faster,” Nicola says.

While much has changed for Irish dance costumes, as a designer, Nicola still references tradition in her contemporary designs.“I always wanted to design costumes that would be more affordable for beginners, but I still wanted them to look like Irish dance costumes. So, I went back to the traditional costume, which was a dress that had a lot of movement,” she explains. 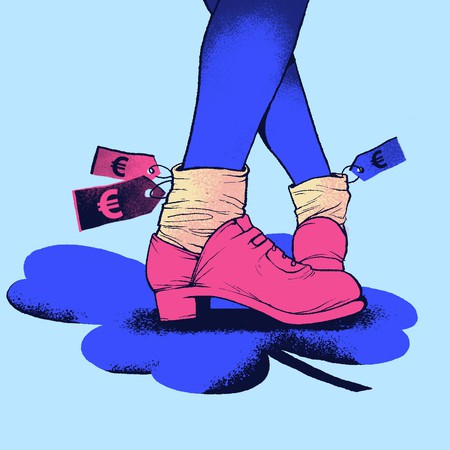 “I remembered a reference picture I had from the ’60s, of a young girl in a simple flared dress. I then started developing that idea and came up with the First Feis dance dress. We used new fabrics but with a traditional silhouette. We started manufacturing that, and it’s become hugely popular,” Nicola says.

While both dancers and designers in the modern age prefer lightweight fabrics, you’ll still find velvet in the opulent wardrobe department of Riverdance, some of which is handmade by French-born designer Delphine Grandjouan.

“When I was a teenager, I used to love dance. I used to do the Margaret Morris Movement, which was very Art Deco. There was a lot of swirling and spirals from that type of dance,” Delphine explains. “My mother used to make a type of fabric known as devoré, and I began to paint the fabric. I always loved to draw and dance, so the fabrics became my medium between drawing, painting and movement.”

When she moved to Ireland, Delphine became inspired by Celtic patterns and imagery and began to create velvet devoré using the technique her mother taught her, in rich Emerald Isle-inspired greens with swirling patterns. In 1995, while selling her textiles at a trade show, she was approached by a costume designer from Ardmore Studios who worked for the legendary Riverdance costume designer Joan Bergin.

“She looked at my fabrics and said, ‘Joan Bergin is redesigning all the Riverdance costumes ahead of their US tour, and this is exactly what she’s looking for. Here’s her number, call her,’” Delphine recalls. After meeting the revered costume designer, Delphine was commissioned to create her velvet devoré for Riverdance and has continued to do so for more than 20 years.

Achieving the finished result is a laborious process that takes several days from start to end. “On the reverse side of the fabric, you draw the motif. Then you heat it and brush out the fibres that have been burned. The silk underneath weathers the process, and this creates the devoré. You then wash it and begin painting it – there are at least 15 colours involved. Then you steam fix it, rolling it between big sheets of paper,” Delphine explains.

Delphine’s process is reminiscent of pre-Riverdance costumes, which took countless hours of drawing, hand-stitching, embroidering and sewing to make. This craftsmanship made the pieces more than just costumes – they were steeped in history for the wearer.

“I wore a costume when I was 14 – when I first came fourth in the world – and that was my lucky costume,” says Niamh. “It was navy with pink satin. It was at a time when things were changing. I had appliqué pink satin within the Celtic design. Appliqué was a technique that was one of the early signs of modernisation – usually, it would be all embroidery. Back then, we kept our costume for a couple of years, whereas now, young competitive dancers get a new costume every year.”

It’s a sentiment with which designer Nicola agrees. “I had a dress years ago; it was orange and black, and hand-embroidered. It was the first one I was involved in the design with, and my mum embroidered some of it, too. It was really significant for me. The costume after that was one I designed from scratch myself, which was also the last dress I competed in.”

For both dancers and designers, the costumes are imbued with a sense of history and significance far beyond their fabric or designs. Nicola says, “Wearing a Riverdance costume that might have been worn by someone like Jean Butler – you feel very proud and lucky to be part of it.”