Fresh oysters at The Eatery at Beshoffs | Courtesy of Beshoffs The Market
Once a petite fishing village long-since grown into a bustling Dublin suburb and tourist trap, Howth still has some of the best seafood in the country. Here are the best seafood restaurants to visit in Howth.

This lively pub has some of the best views in the village, overlooking the harbor’s East Pier and Lambay Island. They also have some of the tastiest seafood dishes in Dublin. Menu highlights include their fritto misto – a plateful of calamari, prawns, sole, haddock and whitebait in a tempura batter with garlic aioli and lemon – and their grilled Dublin Bay scampi. These are elegantly served without embellishment, halved and accompanied with butter, lemon and sea salt. Their catch of the day depends on the luck of the harbor’s many fishermen on any given morning, which is half the fun.

Restaurant, Seafood, Irish, European, $$$
Open since 2004, Deep has become a go-to for fans of superior seafood and won the Paolo Tullio award for best seafood restaurant in 2010. Their signature dishes are their lightly battered calamari and generous mixed seafood platters, and they regularly participate in the village’s annual Dublin Bay Prawn Festival. The atmosphere here is almost as good as the food. This is the kind of place where the owners wait tables and sit down to chat with regulars. Meanwhile, the menu items are reasonably priced. They run an early bird menu from Monday to Saturday offering two courses for an inexpensive price.
Permanently closed
More Info
Open In Google Maps
12 West Pier, Howth Dublin, County Dublin, D13 T1X6, Ireland
+35318063921
Give us feedback

Enjoying without question the best sea views of any restaurant in Howth from itsposition at the end of the West Pier – overlooking Howth Sound and Ireland’s Eye – is Aqua. This place is regularly named best seafood restaurant at the National Hospitality Awards. Housed in a building formerly owned by Howth Yacht Club, Aqua is now a luxurious restaurant with an open fireplace and a live pianist, loved for family gatherings and special occasions. Faultlessly fresh ingredients come from the surrounding seas and from their own restaurant gardens at the nearby allotments on Howth Hill.

Quirky, Relaxed
Give us feedback

Market, Restaurant, Seafood, $$$
A platter of fresh seafood at Beshoffs The Market | Courtesy of Beshoffs of Howth
The Beshoff family are household names in Dublin, having served the best fish and chips to the city’s people since the 1930s. The legacy of Ivan Beshoff – a mutineer on the Russian battleship Potemkin in 1905 who went on to settle in Ireland – lives on through Beshoff Bros. They have stores in the city center as well as the coastal suburbs of Malahide, Clontarf and Howth. The take-away is a pleasant low-key option for a sunny day, when crowds gather on the seafront eating their legendary scampi and chips out in the fresh air. But the restaurant and sea grill at their market on Howth’s West Pier is more comfortable. Here you can enjoy delicious, locally sourced meals like creamy chowder, Clarenbridge oysters and crab claws with oriental spices.
More Info
Open In Google Maps
17-18 West Pier, Howth Dublin, County Dublin, Ireland
+35318397555
Visit website
Give us feedback

Specializing in Mediterranean-style seafood tapas is Octopussy’s on the West Pier. It is supplied with fresh fish and shellfish daily by Dorans on the Pier, the fish shop next door run by three brothers whose fishing experience combined amounts to more than 50 years. Their award-winning chefs use their catch to create tantalizing, small plates like prawns Pil Pil, Roaringwater Bay organic rope mussels and Irish sea hake à la Rossa. 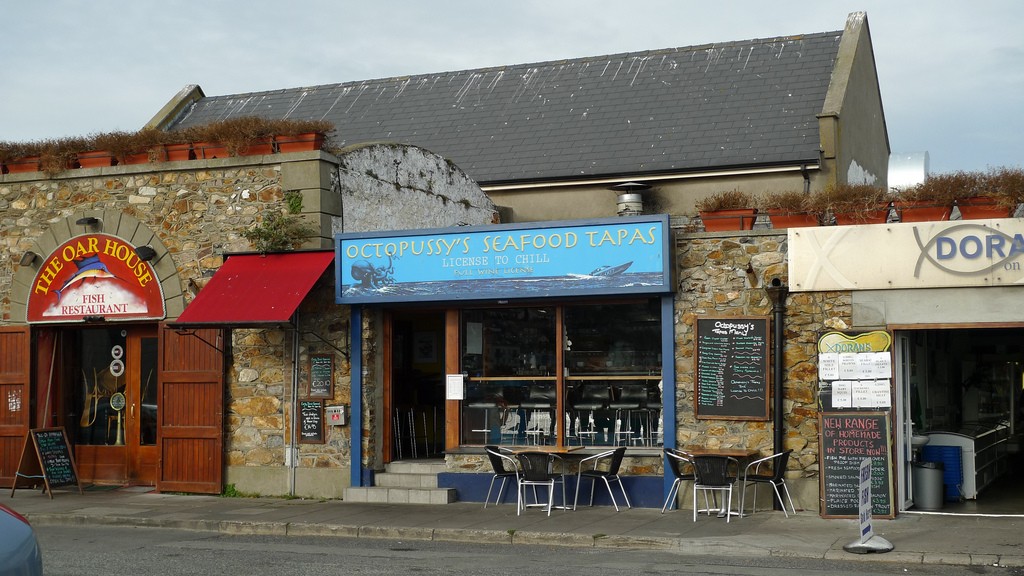 Bar, Restaurant, Seafood, $$$
Although this three-storey modern bar and restaurant is part of Wrights Hospitality Group – owners of six bars and restaurants throughout Dublin – Findlater has kept its history alive. It is still named after the whiskey trader, Alex Findlater, who had the building in the 19th century. Its first-floor Asgard restaurant is named after the famous yacht used in the Howth gun-running of 1914. As well as harbor views and a comprehensive menu, this place has an unbeatable seafood risotto.
More Info
Open In Google Maps
Harbour Road, Howth Dublin, County Dublin, Ireland
+35318324488
Visit website
Visit Facebook page
Give us feedback

Restaurant, European, Seafood, Irish, $$$
This seafood restaurant and guesthouse takes its name from King Sitric II, an 11th-century Norse King of Dublin. Known for their welcoming atmosphere and lobster caught by their own fishermen, King Sitric is a great place to watch the sunset over a perfectly cooked meal. Try the Balscadden Bay crab claws with garlic butter.
More Info
Open In Google Maps
East Pier, Howth Dublin, County Dublin, Ireland
+35318325235
Visit website
Give us feedback
Give us feedback