County Cork in Ireland has some of the country’s best craftspeople, from Stephen Pearse Pottery to ceramicist Sara Flynn – whose porcelain vessels have been exhibited all around the world – to Lucy Hagerty of La Bougie artisan candles. It’s not surprising, then, that Ireland’s ‘second city’ and its surrounding countryside are home to many fantastic craft shops, chock-full of the work of native Irish designers.

Shop, Store
Facebook
Email
Twitter
Pinterest
Copy link
Share
Map View
Philip Pearse opened Shanagarry Pottery in 1953 in his own home. More than 60 years later, the brand is still going strong, his legacy being continued and furthered by his son Stephen. Now running both Shanagarry Pottery and his own enterprise, Stephen Pearce Pottery, Stephen Pearce is one of Ireland’s most successful craftspeople. Using clay dug from the banks of the nearby Blackwater River in Youghal, he and his team of artisans create earthenware that is in demand across the world. Shanagarry Pottery is open to visit seven days a week, with a tea room open every day except Tuesdays and Wednesdays. While in the area, also visit the Ballymaloe Shop, which stocks wool blankets, kitchen and dining textiles and a range of other craft items.
Open In Google Maps
Shanagarry South, Shanagarry, County Cork, P25 VK82, Ireland
+353214646807
Visit Website
Give us feedback

Cork city’s independent Lavit Gallery was established over 50 years ago by a group of artists eager to bring their work and that of others to the people of Cork. Today, the gallery showcases hundreds of artists and craftspeople. Their craft collection promotes pieces by artists working in Ireland such as Sligo-based woodturner Matt Jones and ceramicist Andrew Ludick, whose studio is in Kilkenny. The extensive range at The Lavit also covers glasswork, wall art, clay sculpture, prints and more.

Shop, Store
Facebook
Email
Twitter
Pinterest
Copy link
Share
Map View
Mamukko in Kinsale is the brainchild of two Hungarian brothers, Levente and Attila Magyar. This multi-award winning sustainable venture utilises pieces of sails and life rafts to create beautiful, limited edition bags, wallets, wash bags and even furniture. From a blue holdall crafted from canvas to a round footstool made of mylar sail and brown upholstery leather, this is the place to go for something truly unique, sustainable and beautifully made.
Open In Google Maps
Guardwell, Sleveen, Kinsale, County Cork, Ireland
+353857342004
Visit Website
Give us feedback 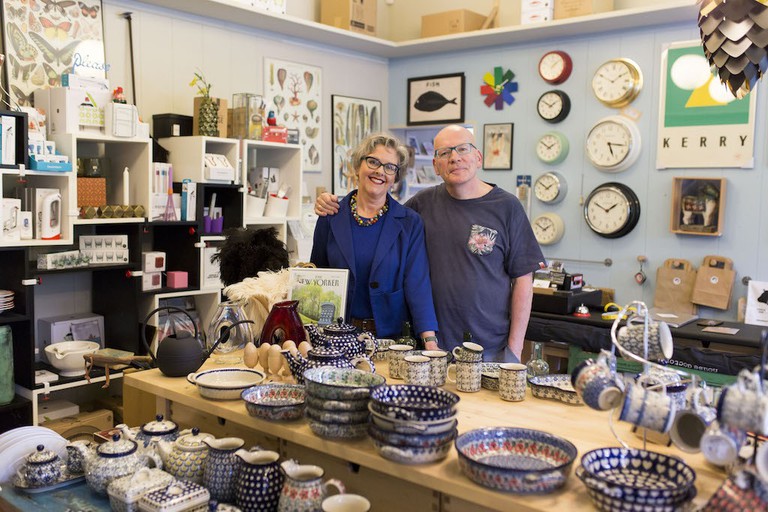 Owners of The Old Mill Stores, Tom Keane and Claire Graham | © Emma Jervis / Courtesy of The Old Mill Stores
This award-winning store lies between Clonakilty and Skibbereen in the village of Connonagh, in a building that was once a provender’s mill. Calling itself ‘an oasis of unusual-ness’, this charming shop run by a couple called Tom and Claire won an Irish Times Best Craft/Gift Shop award for 2016. It is also listed in Sally and John McKenna’s Bridgestone Guide 2016 of the best places to eat, stay and shop. Offering everything from ceramics to leather fly-swatters, from kitchenware to lighting and furniture, this place has it all.
Open In Google Maps
Gortroe, Skibbereen, County Cork, P81 RV10, Ireland
+3532834917
Visit Website
Visit Facebook page
Give us feedback 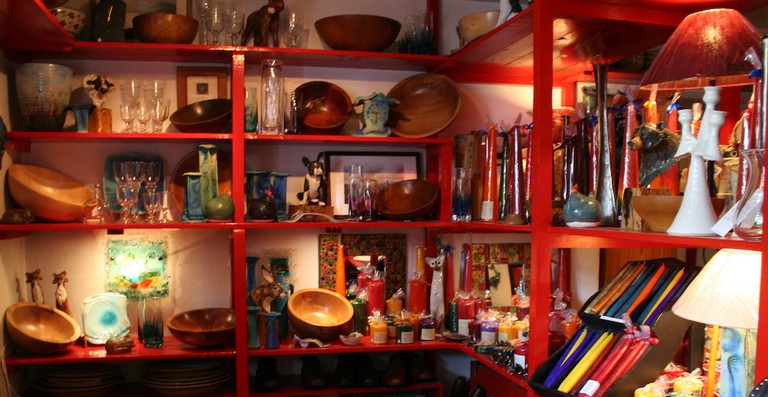 The Craft Shop, Bantry | Courtesy of The Craft Shop
The Craft Shop in Bantry has been around for over 40 years, stocking high-quality handmade Irish craft. Dealing in leather items, jewellery, woodturning, pottery, textiles, candles, metalwork and more, this shop is truly worth the venture into the west. (Of course, the spectacular scenery doesn’t hurt either.) Owner Christine does a monthly round-up of her favourite items from the store on the website. Current selections include funky felt lights by West Cork felt maker Helen Stringer, a trifold iron candleholder by Paddy McCormack and a ‘healing pot’ by Geoffrey Healy.
Open In Google Maps
11 Glengarriff Road, Town Lots, Bantry, County Cork, P75 RV02, Ireland
+3532750003
Visit Website
Visit Facebook page
Give us feedback

And finally, if you’re more of a doer than a shopper, Cork Art Supplies in the city centre has everything you could ever need to create your own crafts and be on your way to being featured in one of the shops above. Stocking the items needed for model making and sculpture, painting and drawing, and most other artistic pursuits, it has oil paints and pastels, pens and markers, spray paint, as well as every kind of brush and canvas. This treasure trove of creative merchandise is a mecca for those who love to make.

A water brush is a reservoir of water attached to a brush. Water flow is controlled by a small plastic feed and can be increased by squeezing the barrel. Artists love their portability: water brushes can be filled from any source, remove the need for open water containers, and clean themselves through use. #waterbrush #righthandman #artsupplies #artmaterials #artshop #irishart #artinireland #lovecork #corkcity #corklike #irishartists #purecork #corkart #corkartsupplies