Guinness Storehouse | © j0hncooke/Flickr
Guinness connoisseurs will know that pouring a perfect pint of the famous Irish dry stout is a rare skill. Ireland’s best-selling alcoholic beverage, the 257-year-old dark beer requires a two-stage ‘double pour,’ which, according to the company who produce it, should take exactly 119.5 seconds. Thanks to their serving expertise, ambience, or a combination of both, these Dublin pubs can be relied upon to serve a good Guinness.
O’Donoghues
Pub, Bar, Irish, $$$

O’Donoghues on Merrion Row is one of Dublin’s most famous traditional Irish music pubs. This is where the folk group The Dubliners first started performing live during the 1960s, while Christy Moore and Phil Lynott have both played inside its walls. As well as a rich musical history, it regularly features on Irish and international lists of the best pints of Guinness to be found in the city. Still incredibly popular at weekends, the only problem is battling your way to the bar. 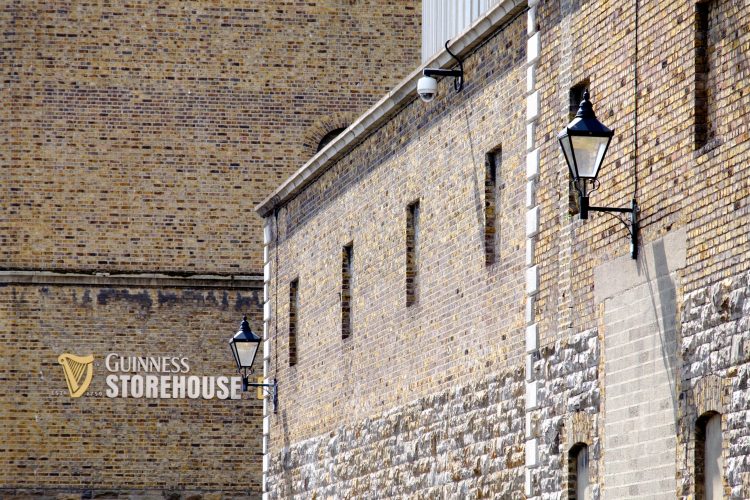 Guinness doesn’t travel well – hence the widespread conviction that a pint in Ireland tastes much better than anywhere else in the world. If that’s the case, then a pint served at the Gravity Bar at the Guinness Storehouse ought to taste amazing. With a price tag of €20 it would want to – but to be fair the fee also includes a self-guided tour of the seven-storey tourist attraction, ending with panoramic 360-degree views across Dublin. 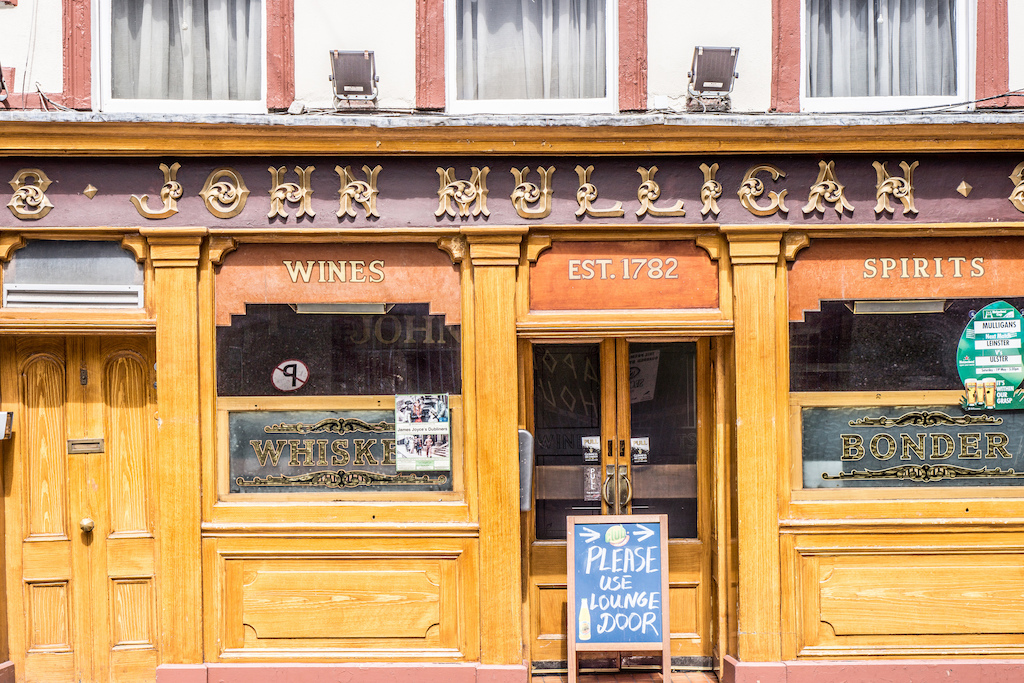 The Mulligan family opened their first Dublin pub in 1782, just over a decade after Arthur Guinness exported his first batch of ale to Britain. Though the establishment changed hands in the 1930s, Mulligan’s is still regularly touted as having the best pint of ‘the black stuff’ in the city. A genuine vintage bar, its walls are adorned with memorabilia from the nearby Theatre Royal which burned down in 1880, including an autographed photograph of Judy Garland, who visited the pub after performing.

Neary’s is a traditional Irish pub near the back entrance to the Gaiety Theatre, making it another popular haunt of actors and lovers of theatre – apparently it’s Daniel Day Lewis’ favourite pub in Dublin. Cosy and comfortable, full of inviting snugs, it’s surprisingly quiet for a venue located just off Grafton Street, meaning visitors can enjoy their beautifully brewed Guinness in relative peace. It’s also a great spot for people-watching from the outdoor tables on a summer afternoon. 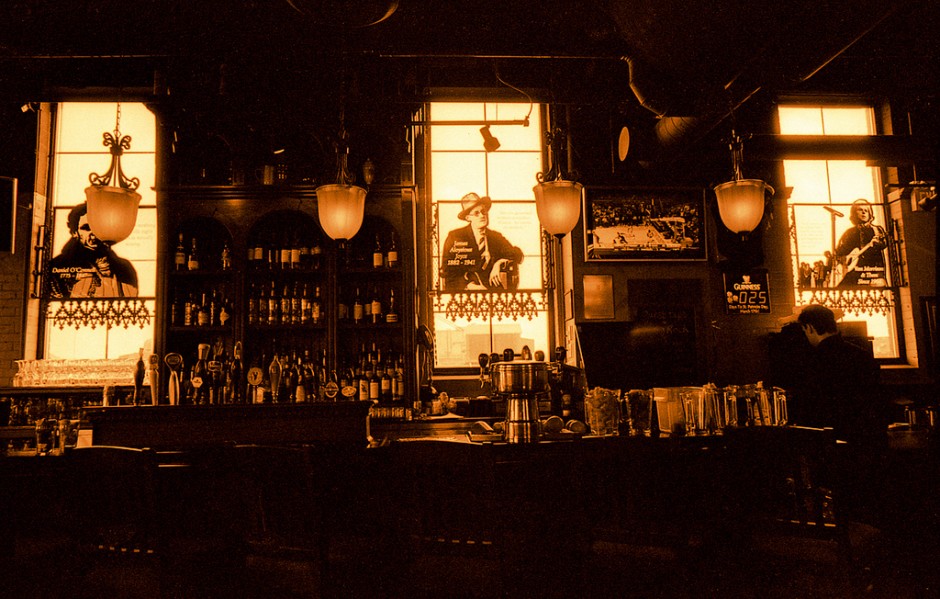 Referred to as being ‘officially Ireland’s oldest pub,’ The Brazen Head can be found at the site of a former coach house dating back to 1198. A Dublin institution, the premises has hosted many famous patrons throughout its long history, such as authors James Joyce, Jonathan Swift and Brendan Behan, as well as Irish revolutionaries Wolfe Tone and Daniel O’Connell. Robert Emmet is said to have kept a room at The Brazen Head and even planned the 1803 rising from there. 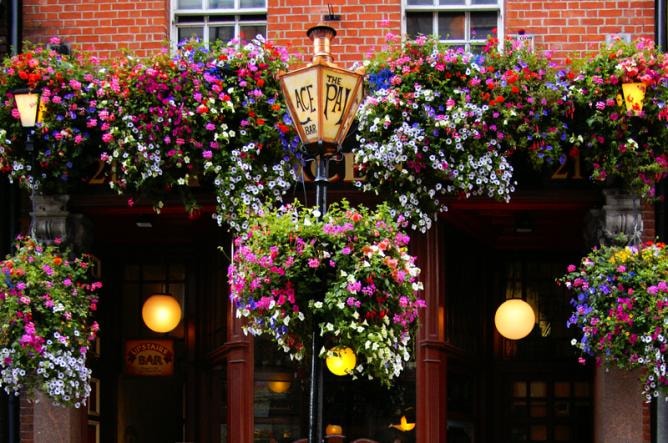 One of Dublin’s finest, original Victoria pubs, The Palace Bar was established in 1823 and became the favourite watering hole of the Irish media throughout the 1940s and 50s. Editors and newsmen from Ireland’s main papers came here to eat, drink and discuss stories, and it is still popular with journalists to this day. Having been under the ownership of people from County Tipperary for over a century, it has also become known as ‘the Tipperary pub’, where Tipperary hurlers and their supporters celebrate match days in Dublin.

This Baggot Street pub is said to be the only establishment that the Irish poet W. B. Yeats ever drank in, but that isn’t its only claim to fame. Rory Guinness – of the famous family – has said in no uncertain terms that Toners serve ‘the best pint of Guinness in Dublin.’ The poet Patrick Kavanagh also used to drink here, no doubt enjoying the superior stout and the original features, such as brass tap bars and flagstone floors. During the Arthur’s Day celebrations the band Mumford and Sons played outside in the beer garden.

Often described as a ‘no-nonsense’ kind of pub, Hartigan’s has a surprisingly sweet backstory. Apparently, publican Alfie Mulligan was taken into hospital in Dublin unexpectedly one day in the 1970s. Ypon his release he sought out a payphone to let his wife know where he was, and happened to walk into Hartigan’s. The couple bought it together a year later, and it went on to become a beloved local to many a UCD student and Leeson Street resident.