Dublin today is a cosmopolitan and multicultural metropolis attracting both long-term migrants and temporary visitors from all four corners of the globe. This being the case, it is no surprise that the city now has a hugely diverse culinary scene, playing host to a vast array of restaurants for all tastes and budgets. Take a peak at our guide to the top 10 restaurants in Dublin’s Old City and gain a valuable insight into one of Europe’s most exciting urban destinations.

This absolutely outstanding Italian restaurant can be found on Dublin’s Dame Street, a centrally located thoroughfare in the heart of the city. Founded by the Bytyci family two decades ago, Toscana has established itself as one of the most beloved culinary jewels in the capital’s crown. Championing fresh, home-grown and naturalistic cooking, Toscana was awarded the title of best ‘Grow It Yourself Restaurant in Ireland 2013/14’ by Good Food Ireland in recognition of a history of excellence. Toscana also prides itself on preparing dishes using ingredients from their own farmhouse gardens. There is a second Toscana restaurant of equally high quality located in the peaceful seaside town of Dún Laoghaire, in the suburbs of Dublin. Either location is well worth a visit, and neither will disappoint when it comes to service and standard.
Toscana, 3 Dame St, Dublin 2, +353 1 670 97855 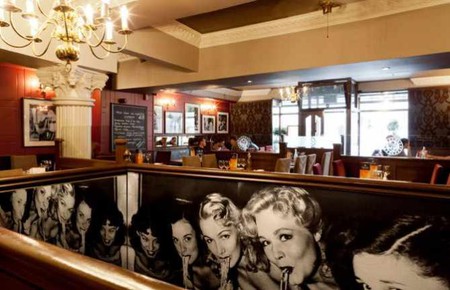 One of the most popular culinary destinations for tourists in Dublin’s fair city since its establishment in 1998, the Queen of Tarts is a very lively cafe and patisserie that will not leave you disappointed. Sit back and relax with a cup of tea or a glass of wine, and help yourself to anything from a Victoria sponge cake to a freshly baked scone while watching Dubliners go about their daily lives from the outdoor terrace.

Restaurant, Steakhouse, Seafood, Irish, $$$
Facebook
Email
Twitter
Pinterest
Copy link
Share
Map View
If you’re on the prowl for a steakhouse that is unpretentious in nature and incomparable in quality, then the Whitefriar Grill is the place to go. As well as offering some of the best quality steaks in town for an excellent price, they are also known for their mouthwatering brunch beginning at 10:30 am. They have adopted the slogan ‘Best Brunch in Dublin’, and it is easy to see why nobody has dared to challenge this assertion once you’ve tried it for yourself.
Open In Google Maps
16 Aungier Street, Dublin 2, County Dublin, D02 X044, Ireland
+35314759003
Visit Website
Give us feedback

Malaysian food is somewhat hard to come by in Dublin, which is what makes Langkawi all the more special. Run by two brothers from the city of Seremban in the south of Malaysia, this gem of a restaurant offers traditional Malaysian fare such as prawn fritter, tau foo sumbat and Malay flat bread with chicken curry. Hard to find cuisine which is even harder to forget once you have sampled it for yourself.
Langkawi, 46 Upper Baggot St, Dublin, +353 1 668 2760 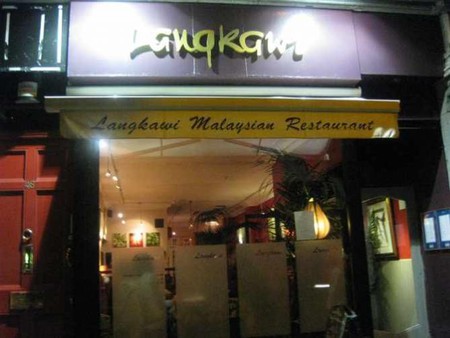 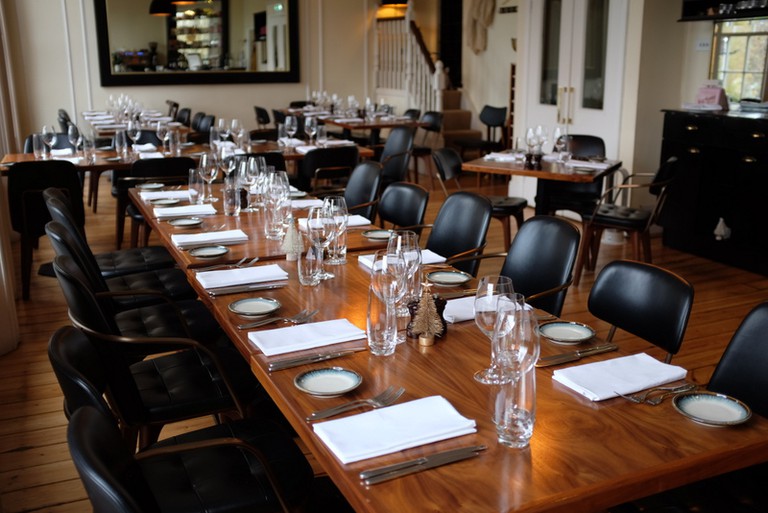 The Pig’s Ear serves Irish cuisine with a modern twist | © Stephen McAllister
Directly across from the venerable Trinity College you will find this very popular and exceedingly comfortable establishment. You’ll know its reputation for quality is well deserved when you try some slow cooked Irish beef cheek or maple glazed pig belly. The Pig’s Ear was awarded a Michelin Bib Gourmand in 2009 an has retained it every year since.
Open In Google Maps
4 Nassau Street, Dublin, County Dublin, D02 YX74, Ireland
+35316703865
Visit Website
Give us feedback 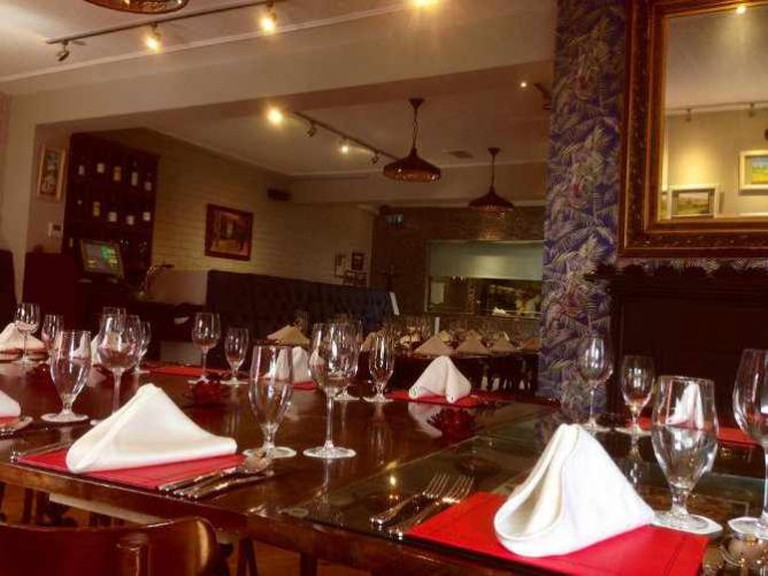 An Bhialann | Image courtesy of An Bhialann
An Bhialann is Irish for, believe it or not, ‘the Restaurant’. This family owned and operated establishment situated in the heart of the old residential neighbourhood of Ranelagh caters to guests and groups of all ages with enthusiastically friendly service and a cordial atmosphere. The seafood particularly deserves special praise for its freshness and presentation. The place fills up very quickly, so you’d best book a table in advance in order to avoid disappointment.
Open In Google Maps
120 Ranelagh, Dublin, Ireland
+35315385200
Give us feedback

Bar, Pub, Restaurant, Irish, European, Soup, $$$
Facebook
Email
Twitter
Pinterest
Copy link
Share
Map View
Located on Poolbeg Street, right next to the famous Mulligan’s pub, the Vintage Kitchen quickly established itself as one of the city’s most exciting new restaurants. The staff takes pride in their 1970s vinyl record player, hence the titular ‘vintage’, and customers can even bring their own records from home. The food, however, is very much modern, elegant and served in extremely generous portions. Nobody has ever complained about receiving more food than they asked for, have they?
Open In Google Maps
7 Poolbeg Street, Dublin 2, County Dublin, D02 NX03, Ireland
+35316798705
Visit Website
Give us feedback

Restaurant, Vegetarian, Middle Eastern
Facebook
Email
Twitter
Pinterest
Copy link
Share
Map View
You will find a wealth of traditional Middle Eastern falafel, all presented with a modern twist, in this cosy and modern restaurant on Dame Street. The service is quick and efficient, while the food itself is filling and tasty and exudes a sense of home-made intimacy that you don’t really get from larger establishments. At Umi Falafel, the price is very reasonable too, as you can order a falafel plate with a drink for only €7.50.
Open In Google Maps
13 Dame Street, South City Dublin 8, County Dublin, D02 HX67, Ireland
+35316706866
Visit Website
Give us feedback 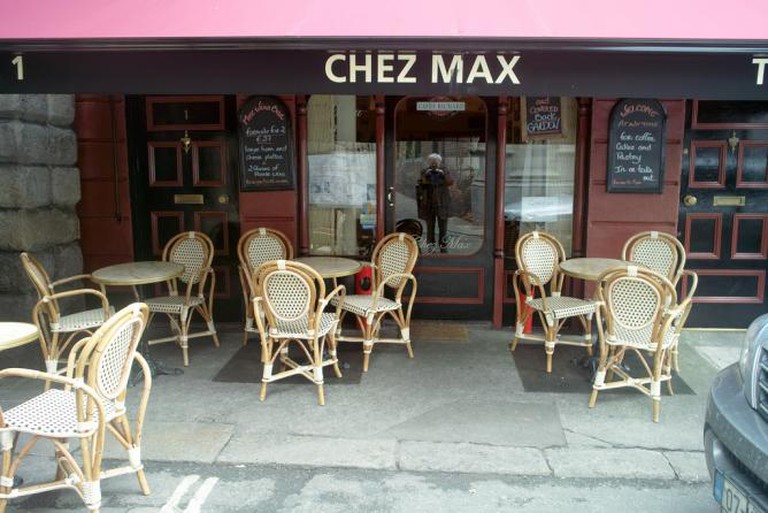 Situated in the basement of the Dublin Writers Museum, and located just across the road from the Hugh Lane Gallery, Chapter One is simply soaked in the culture of the old city. The restaurant has been Michelin Star awarded every year since 2007, and is frequently ranked among the best and most exclusive restaurants in Dublin. The quality of the service is renowned across the nation, and for good reason. Highlights of the menu include the salt marsh duck breast and the fillet of Irish Hereford beef.