Spotlight: Who Was Father Pat Noise? 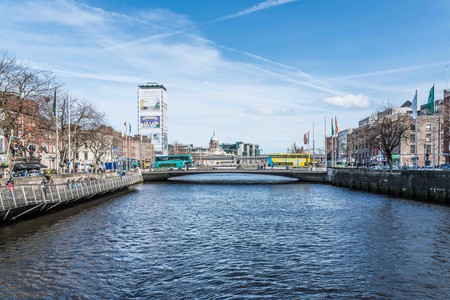 In the summer of 2006, a mysterious plaque was suddenly discovered on the west side of O’Connell Bridge in Dublin, dedicated to the memory of a Catholic priest called Father Pat Noise. As Dublin City Council tried in vain to figure out where the curious memorial came from, the story caught the attention of the media and the imagination of the Irish public. Ten years on, we check back in with Fr. Pat Noise.

The plaque – which was first noticed in 2006 – is said to commemorate a priest and advisor to a Peadar Clancy. There was an Irish republican – second-in-command of the Dublin battalion of the Irish Republican Army’s during the Irish War of Independence – named Peadar Clancy, but if this is who the plaque intends to refer to then the surname is misspelled. The real Peadar Clancy was shot dead on Bloody Sunday, 1920. 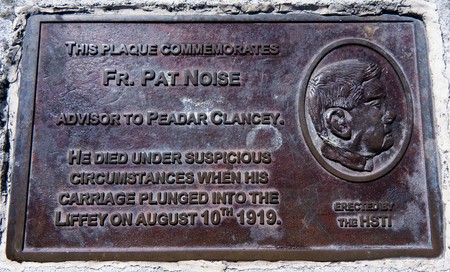 Fr. Pat Noise’s memorial tablet states that he himself died under ‘suspicious circumstances,’ when his carriage plunged into the Liffey River in 1919. The plaque claims to have been erected by the HSTI, but no such body exists. (It is now thought to be an ironic anagram.) When research failed to uncover any evidence of an actual Father Pat Noise having ever lived or died, the bewildering bronze-cast shrine, which looks just like so many others scattered throughout the city, was revealed as nothing more than an elaborate hoax.

After Dublin City Council had been made aware of its existence by journalists and the search for Father Pat Noise had been taken on in earnest, some pranksters finally admitted to having placed the plaque on the bridge back in 2004, where it had gone unnoticed for two years. They had installed it in the space left after the removal of the control box for a failed attempt at a millennium countdown clock – meant to project a display onto the river – that had been taken away in 1996 due to technical problems. The clock was something of a joke around the city, nicknamed ‘The Time in the Slime’ in the fashion of satirical bynames given to local monuments. 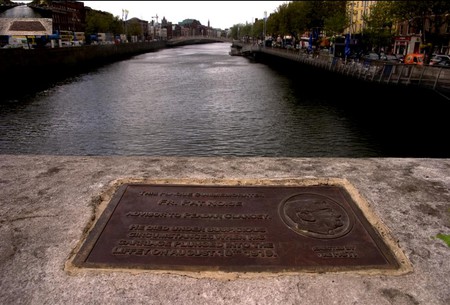 The Council immediately called for the ‘unauthorized’ plaque to be removed, but by this time Father Pat had an even more loyal following than he did when he was supposedly real. The plaque was celebrated as a challenge to authority and a comment on the perceived tendency of the government to spend public money on unsuccessful projects. The identity of the plaque’s creators is still not widely known, but they are rumored to be two brothers. 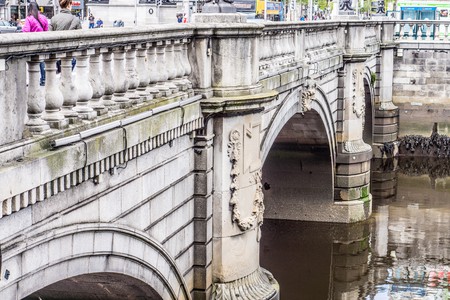 The Council eventually voted to leave the plaque where it was but, the following year during construction work on O’Connell Bridge, it was removed in almost as sneaky a fashion as it had arrived. Incredibly, a short time later a second plaque materialized in its place, and it was never removed again. In 2011, Eoín Dillon of the Irish folk band Kíla immortalized the character on his solo album in the song ‘Lament for Fr. Pat Noise.’