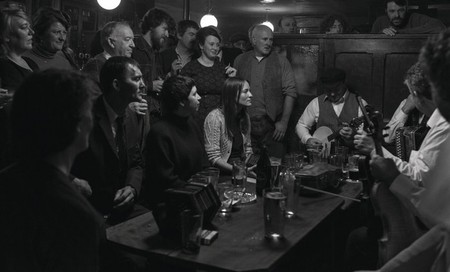 Ireland’s distant past resounded in the songs hauntingly sung in Gaelic by Joe Heaney (1919—84), but a stunning new film reveals he had a love-hate relationship with his homeland.

Song of Granite was filmed in black and white by Richard Kendrick and is staggeringly beautiful. In one medium shot, a tableau, Joe’s father sits before the family’s cottage singing a traditional song into a primitive recording device in the fishing village of Carna in Connemara, County Galway, in the 1930s. The man doing the recording sits at a table opposite him; some of the family’s relatives or friends have come to watch and listen. Joe’s mother stands to the left of an open doorway. 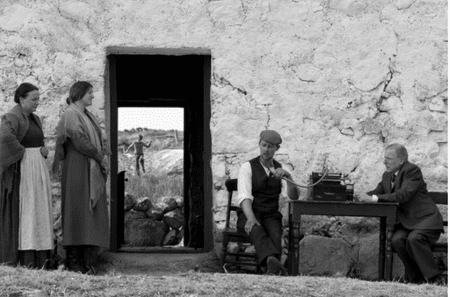 Framed in deep focus through the doorway, young Joe (played by the soulful Colm Seoighe) approaches from the bit of land behind the cottage and steps through the aperture into the foreground where his mother rests her hands on his shoulders. Though Joe is as yet too shy to be recorded himself, he’s clearly been lured by the song sung by his dadaí in the quavering, ornamented, and unaccompanied sean-nós style.

Song of Granite favors numinous images of the Connemara landscape—shore, river valley, mountains—in which Joe was raised, and spine-tingling song renditions by, among others, the rugged contemporary sean-nós singer Micheál Ó Confhaola, who plays Heaney in the 1940s and early 1950s.

The film is short on incidents, being more of a visual poem than a drama. A very long tracking shot shows young Joe walking past some old men of the village in front of cottages on the shore—nothing more, though there’s a touch of Robert Flaherty’s Irish semi-fictional Irish documentary Man of Aran (1934) in Collins’s depiction of the Carna people’s hardscrabble lives. 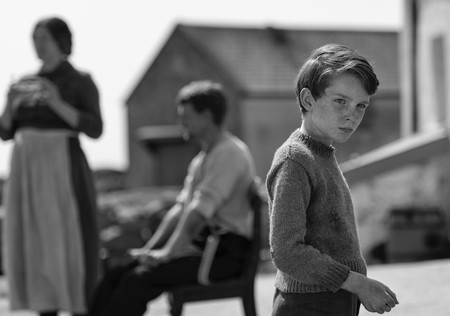 Early in the film, young Joe is seen tying a knot in grass beside a bird’s nest that’s lying on the ground with eggs in it. He later revisits the spot, which he identifies by the knot. The egg shells have been ravaged and are empty; a predator seemingly ate the unhatched chicks. It’s a metaphor for the end of childhood and the disillusion that comes with it, but also, perhaps, for Ireland itself. In the next scene, the adult Joe is standing on a village road in a suit waiting for the Morris Minor that will take him away for the first time.

In 1954 or 1955, Heaney’s son recalls regretfully in voiceover in Song of Granite, his father abandoned his wife and children in Glasgow. Heaney is seen ominously looking out of a window when he’s standing beside his wife. Later, he takes a last look at her and their kids while they’re sleeping. He’s then seen standing on a railway station with a suitcase.

He vanished from their lives for about seven years, going to live in London. The history of popular music is littered with stories of male performers who couldn’t cope with monogamy and family responsibilities. The tendency to romanticize them as rovers and ramblin men’, as cinema has romanticized drifters in Westerns and road movies, neglects the feelings of those they leave behind. 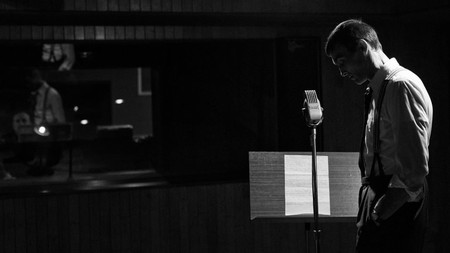 Invited to the 1965 Newport Folk Festival, Heaney decided to move to America permanently and on his own. In the film, he’s shown working as a doorman, unshaven and unsmiling, at The Langham, a luxury apartment building at 135 Central Park West in Manhattan. His hand touches part of the building’s pale limestone, but it’s impossible to know what he’s longing for. He learned some 500 sean-nós songs, and he talks in the film about disappearing into them when he performed, becoming isolated in the process. It’s a fair bet that he was happiest or only happy when he was singing. 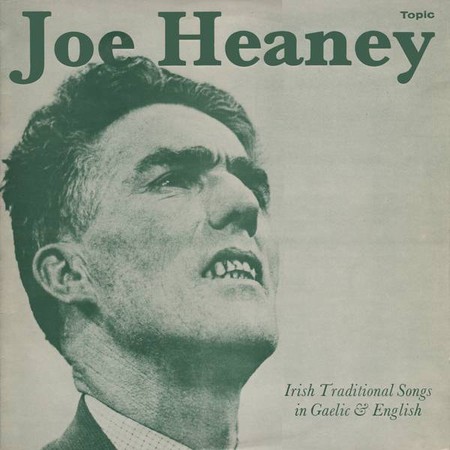 What did Heaney want, except to go on singing? The film offers few insights. Gazing at the countryside in his mid-thirties, he bitterly remarks he can’t wait to leave Ireland. When he’s in America in his late fifties or early sixties (and played by the white-haired Macdara Ó Fátharta), he confides to different women that he wants to go back; the places of his childhood are calling him. His long resentment toward Ireland was apparently attributable to its scant acknowledgement of his talent and achievement as an artist.

A female relative or friend of the family relays the story of how she attended a Clancy Brothers concert in Ireland and, knowing the group had helped Heaney in America, got one of them to pass on a message to him that his wife had died and that he should contact his children. He failed to get in touch on that occasion, though the exile did eventually visit “the ould sod” again. Who knows if he brought his demons with him?