April 27, 2017, was Poetry Day in Ireland, a one-day festival dedicated to celebrating poetry in its many forms through a host of events. For four poets, it also meant the much-awaited announcement of the winner of this year’s Ballymaloe International Poetry Prize – one of the world’s most profitable awards for a single poem.

The Ballymaloe International Poetry Prize, established in 2011, is awarded annually by The Moth arts and literature magazine, with the support of Cork’s beloved Ballymaloe Cookery School and its founder, Darina Allen. Worth €10,000 – with three runner-up prizes of €1,000 – it is among the world’s most lucrative rewards for a single poem. By comparison, the UK’s National Poetry Competition has a first prize of £5,000 (approximately €5,900 at the time of writing).

All four shortlisted poems appeared in the magazine’s spring issue – with three American poets and one British entrant selected – before the overall winner was announced at a ceremony last night, at Poetry Ireland HQ in Dublin’s Parnell Square. Ultimately, prize judge Deborah Landau – a Guggenheim Fellow and director of NYU’s Creative Writing Program – chose Lee Sharkey as the victor.

From the US state of Maine, 72-year-old Sharkey has published 11 books of poetry and garnered multiple other awards over the course of her writing career. But this specific poem is particularly close to her heart, which will no doubt have made the win all the more special. 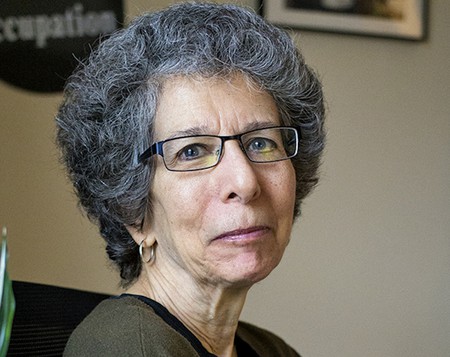 Dedicated to her husband, the powerful winning work ‘Letter to Al’ explores the impact of ageing, and in particular his dementia, on their long marriage. On reading it, Landau said ‘I fell hard and fast for this poem – its headlong music, its restlessness of heart, its heat. Here is something true and hot of life: spots of time, held.’

Both Lee and her husband Al flew to Dublin for the announcement – with Al, a retired information technology specialist, telling the Portland Press Herald, ‘I wanted to see my wife at a high point in her career, and I wanted to be there to hear her read our poem’.

Read it for yourself below.

‘Letter to Al’ by Lee Sharkey

It was all sound. The loons. My lunatic heart. The warblers’ variations.
It was the loon night leading me to damage, a reluctant knowledge
that to do for you is to do to you. Wild, erratic, the loons
sing out their night devotions, Monk of the bird kingdom,
trilling the high note past its measure till the heart’s thrilled open.
Is it fog you wander when you stare out of the house of yourself,
is a you small and distant gathering itself for your return—a penny
for your thoughts but you do not speak them. Only when you draw your bow
across the cello strings do I hear the one who made my fierce heart
tremble. It was pure sound answering pure sound rising and subsiding
on a flood of memory and it had the power to unlock my grief.
Were there a hiding place in poems I would slip you into it; you could cling
to my back or a fiddler’s trousers, as Chagall wrote of his father, who worked
loading barrels of herring and died crushed by a car. Barrels of grief.
Do not forsake me. Who can know what is written on his back.

I return to the nights in Russia when we stripped off sweaters and shirts,
long johns and underthings and dived for the narrow bed. A deep cold
had crystalized the city, trees of crystal, palaces of crystal sparkling
where families paraded on winter evenings in high fur hats
and long fur coats and boots made of caribou on sidewalks
layered with snow. Beneath thin covers we shivered as we stole
the fire of sex. This was the kingdom you carried me off to,
where everyone recited Pushkin and bested each other’s tales
of the gulag, the breath of the great bear of hunger on their lips.
I lay on the floor teaching my throat the sounds of a new language;
I called out for chalk and they gave me honey; you struggled to teach
in a language you learned in high school, the Cold War piquing
your interest, you with the gift of tongues. Do you have potatoes?
our colleagues repeated, concerned for the strangers recently arrived
in the closed zone, knowing nothing but eager and alert.

To live a routine of catastrophe. Each day radically undetermined.
Will tomorrow be Sunday or Tuesday. Will the heart hold for one more hour.
Each day undermined. Darkly mirrored in the monitor.
Will I drop to the floor in the cereal aisle. Will you forget your pin.
The dish lies broken. This wasn’t what we anticipated.
The thing without a name goes with us. Laboring and uncertain.
Death’s imbecile cousin. Volatile. Childlike and self-absorbed.
Delights in your confusion. Will not be ignored. Sprawls in the bed
with its seductions. Swipes your keys and identification.
What’s the game plan. Take each day as it metastasizes,
Lord, your humble servant, Shekhinah of the midnight hour.
In whose hands we place ourselves in medicated dreaming,
the voices calling each other’s names: Wake! Emergency!
I fumbling to you. You fumbling to me. What can I do? Just stay
with me. Till the end of shadows. Till the end of end.

It’s the if under every utterance. It’s the utterance over every if.
It’s the memory arriving of my mother in a slatted lawn chair
eyes closed (I have closed them), smelling the salted sea grass,
a black and white memory I am painting red. Tonight she will leave
her diaphragm in the drawer. Don’t tell my father. I want to be.
To be out in it, making memories of my mother, head thrown back,
letting the breeze touch her. She and I painting the lawn chair red.
To be about it. Desire, the little engine that keeps on pulling,
in every box car a generation re-membering its lost stories
over the clatter of the rails. To make, to shape it. To see every word
flown from the mouth as a catbird’s feather loosed in wind,
tipping the scales of a future. As in: My father has throttled his words
once too often and lost the power to speak. He has brought
the house down around him and sits staring from the rubble.
I write this feather to touch him not to impeach.

It is enough some hours simply to be together, within our walls
among our familiar objects—refrigerator, toaster, pencil, stepladder,
jacket, glove—or walking hand in hand. We rest when we’re tired.
We eat when we’re hungry. The locusts, the frogs, the death of the firstborn—
we have escaped them. Against us, not a dog shall move his tongue.
Some hours it seems perfected, the cycle of passion and caring,
striving and settling, everything come down to love. The marvel
of devotion, the osmotic comfort of skin on skin. We quiet,
old lovers who have no need to speak. Outside, the plagues continue:
the pestilence, the grievous hail, the stinking fish, extinctions.
Pharaoh doubles down on his intransigence. But our ambitions
have grown modest. I stop for a flower’s deliquescence, recite
the sequence: crocus, daffodil, tulip, peony, rose.
You fill your pillbox, watch Space X rockets land on water.
A hand held, a kiss soft on the lips—there is no future to speak of.