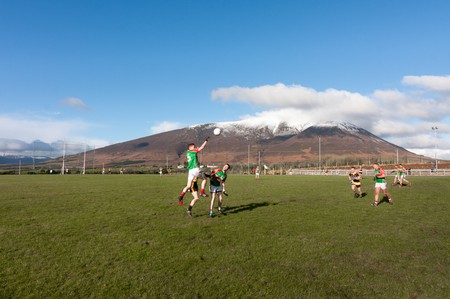 Paul Carroll spent seven years photographing Gaelic football and hurling in every one of Ireland’s counties. Gaelic Fields is the culmination of a project that features pitches in some of Ireland’s most stunning, most remote and harshest landscapes.

Culture Trip spoke to the Cork-based photographer about the 31,000 miles that he covered, the communities he encountered along the way and having to don his boots for the first time in 20 years when one particular team were a man down.

How did the project come about?

I funded the project myself, but I started a Kickstarter campaign at the beginning of August to cover the printing of the book. The book is available in November but people can pre-order it through the website. I’m one of these people who expect people to be critical all the time but the response so far has been really positive.

Does that mean you’re incredibly critical of your own work?

Oh definitely. Over the seven year period I went back a number of times because I wasn’t happy with pictures and I wanted to get it right, so I reworked a lot of photos. It might be an Irish trait but I don’t take praise very well. The narrative of the book follows the Gaelic club season and flows through the year. It starts in the dirty, damp days of January, then moves into overcast days, into highlight and soft evening light later on. Within that I’ve tried to capture the flow of a game, so its starts with the throw-in and so on.

A story within a story?

Yes, photography is all about storytelling. These pictures should guide you through a story of playing and watching Gaelic games within a year. For example, Ireland is a place where the weather can be difficult so you have to showcase that – it can’t be purely pictures in the sunshine.

Like the diagonal trees in places like the west coast, that have been battered by the wind?

I love that. Those trees and bushes look amazing, like from a Tim Burton film. When you go down to Kerry you’ll see those bushes that are almost at a right angle. Logistically, there’s a lot of difficulty getting shots. Sometimes the weather blocked out the entire background. There’s a photo from Sligo where I had to go back three times because the weather was so bad you couldn’t see anything. I ended up in the middle of the goal, behind the goalkeeper, and thankfully it worked out. 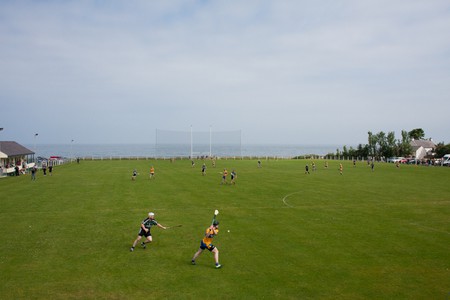 What gave you the idea in the first place?

About seven years I came across European Fields by Hans van der Meer. I was living for the weekend, had no real focus in my life and was thinking this would be an interesting angle to take in Ireland. Gaelic Games are the most-played sports in Ireland and no one has really tackled the different locations that they’re played. These locations cover the community and identity at the grassroots level. The ability to focus on such a long term project came from a 28-day cycle across Ireland I did for suicide and depression awareness the year before. We raised lots of money for charity and had loads of fun, but covering that distance in that time gave me the mental fortitude to apply myself.

Do you think that long term target was essential?

Without the cycle I would never be able to put long terms targets on anything. I originally gave myself 10 years, so I’m ahead of schedule! Within that time frame of 10 years I would break each year up with its own targets. So I started in the southwest, then headed east and moved around the country. I had never even driven before; I had to buy a car to do it.

Did you find such a big task daunting, given your attitude before?

Not at all! At the start it reminded me of different relationships; you have the initial high where everything is brilliant, then the middle part plateaus and you feel a bit dragged down, and then you calm down and get right back into it and fall totally in love with it. 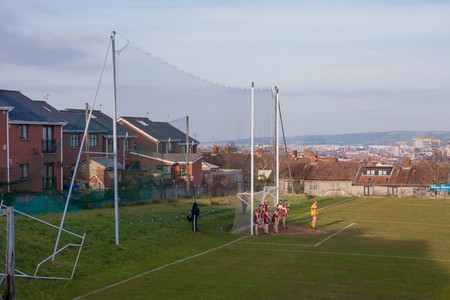 I’m assuming you were a big Gaelic sports fan beforehand?

I am, but I’m approaching it more from the photography side. I also work as the organiser of Cork’s Homeless Street League so I see the positive impact of sport all the time. In the period that I was taking the photos Ireland was in a recession, with people emigrating, leaving teams and communities behind. I’m a competitive person and a fan of most sports because I see the positive mental and social benefits of sport. I got to combine all that with my love of photography.

Did you notice big differences between the different counties?

You’d see different levels of support. You go to somewhere like Kerry and the support is like religion. I went to see Dr Crokes play South Kerry and there were kids of 7 or 8 going around in South Kerry jerseys, like children wear Man Utd of Liverpool shirts in the rest of Ireland. That level of support is incredible. The preferred sport would change in each county – you’re not going to get Gaelic football in Kilkenny. You also get different standards and in Northern Ireland; there’s a different dynamic because it’s such a strong part of people’s identity and its recent history.

Do you think Irish people will view the book differently to outsiders?

They might look at it differently, but I think that there is a universal nature to the pictures because they’re about people interacting with their surroundings. People enjoy that – I hope they enjoy that! – because it’s what I enjoy about it. 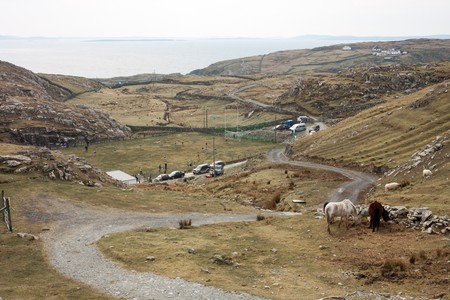 Did you have any favourite places along the way?

At the start I focused on pristine, beautiful shots. Over time the story evolved and I became as interested in towns and urban landscapes. There’s a pitch in Cavan, in Bailieborough, with a four-story factory directly opposite. You can hear the pistons pumping while they play and a lot of the players work in that same factory.

In Inishturk, the road snakes down towards the pitch, leading you to the field just as it would in real life. It goes back to that element of people impacting their surroundings. That island has 54 people living on it so you’d struggle to put out two teams and the pitch has been there since the 1940s, but has only been open as an official field since 2011.

It looks like it’s been dug out of the rock.

It really does! It’s a natural amphitheatre. The funny thing is a lot of photography is luck. I came the wrong way around the island and came over the top so took the picture then.

Did the travelling, or other locations, make you miss home?

That’s an interesting question. I’d say it made me nostalgic for my childhood in the village I grew up in, playing with my mates – that’s the element I miss.