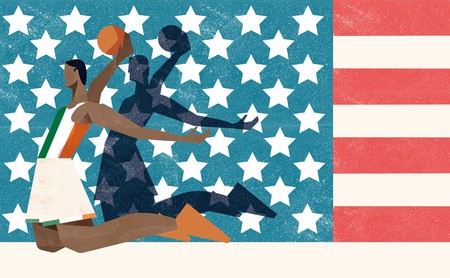 At 17, Igiehon has college recruiters falling over themselves in pursuit of his services. Currently playing for one of America’s most reputable basketball schools (Lawrence Woodmere School), the teenager has 33 offers awaiting his response after he graduates. The move to the States is not an alien one for the family, with Aiden’s 19-year-old brother Brandon already plays college level soccer for the Potsdam Bears in New York).

When Igiehon took to New York’s iconic Rucker Park, the historic basketball courts at 155th Street and Frederick Douglass Boulevard in Harlem, it was his dunking prowess and defence that went viral. Rucker Park has a reputation as the place to watch basketball’s biggest talent, and has seen the likes of Kobe Bryant, Kevin Durant and Kareem Abdul-Jabbar all play there on their way to the NBA. Igiehon, it appears, is in good company.

To date, only one Irish-born player has made it to the NBA. Pat Burke, born in Tullamore in County Offaly, played for the Orlando Magic and the Phoenix Suns in the early part of the 21st century (he was also signed by the Golden State Warriors but didn’t make an appearance), as well as playing for a number of professional clubs across Europe. That said, Burke moved to the United States as a three-year-old with his family.

The 6ft 11in center’s family set up home in Cleveland, Ohio, with Burke going through the American school system in Florida and playing college basketball at Auburn University. Igiehon, on the other hand, is a born and raised Dubliner.

The teenager hails from Clondalkin in the west of Dublin and has been playing basketball since he was 12. At that age he stood 5ft 6in tall, but within a year had reached 6ft 4in. His talent caught the eye across the pond and Lawrence Woodmere offered him a scholarship after he turned 16. He now lives in New York with his aunt and uncle.

In Ireland, basketball is a minor sport. It has to contend with Gaelic football and hurling, as well as rugby, soccer, horse racing, boxing and golf, among others. Its own Super League has been running since 1973, with the bulk of member clubs from Dublin. The league was particularly popular in the 1980s, attracting American talent after the relative success of the likes of Tony Andre, who moved to Killarney from the US and became ‘Irish basketball’s first superstar’.

While basketball could be give the tag of ‘emerging sport’ thirty years ago, the reality is that it has long since stalled. Although the game is still played, the standard is way off the NBA, but also significantly lower than other European leagues that make up the second tier, after the truly elite players plying their trade in the United States. Spain, Italy and Greece and parts of Eastern Europe have professional leagues, but Ireland falls a long way short of that standard.

With that in mind, a young player with the talent that Igiehon has was always going to end up in the American school and college system. But while he’s being courted by everyone and anyone at NCAA (The National Collegiate Athletic Association) level, a sense of perspective is required. American sport (and all sport for that matter) is littered with young talent that was hyped up before never making the grade. As far as basketball is concerned, just 1.1% of college players will make it to the NBA, according to the NCAA’s own research.

Achieving professional status is a painfully difficult nut to crack, but Igiehon appears to be well on his way to being one of the chosen few. Only time will tell.