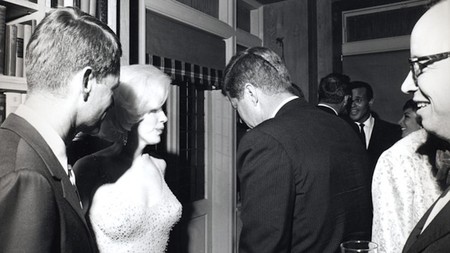 The dress that American actress and sex symbol Marilyn Monroe wore during her performance of ‘Happy Birthday, Mr. President’ in the 1960s is expected to raise around $3 million at an auction in November. But before going to its new home, the dress will be brought to Ireland for one week, to be displayed at the Museum of Style Icons in Newbridge, County Kildare.

Monroe’s now-famous rendition of ‘Happy Birthday, Mr. President’ took place at President John F. Kennedy’s 45th birthday party in May, 1962, at the third Madison Square Garden building in New York. She took a break from filming the never-finished comedy Something’s Got to Give to attend the celebration, just three months before her untimely death in August of that year. A play on the classic ‘Happy Birthday to You,’ the song featured lyrics specially written for JFK.

The dress Monroe wore during the song was so skintight that the Academy Award-winning French costume designer Jean Louis had to sew it while she was wearing it. Made of flesh-colored, sheer silk gauze and covered with thousands of glittering rhinestones, it had an original price tag of US $12,000, but increased in value more than 100-fold in 1999 when it sold for $1.26 million at Christie’s Auction House. It will go on sale again this November in Los Angeles as part of an auction to mark the fact that the actress would have turned 90 this year had she lived. The dress is expected to reach up to $3 million this time.

Before the auction, the famed gown will make its first trip outside of the US, to be exhibited at the Museum of Style Icons in Newbridge, County Kildare. The museum holds many artefacts and items of clothing that once belonged to well-loved celebrities like Princess Grace and the Beatles, including one of the best collections of Audrey Hepburn couture and memorabilia worldwide. The dress will join the museum’s existing Marilyn Monroe exhibit for one week only, from October 29th until November 6th.

This amazing Pucci dress is from her private wardrobe. She had one in every colour and was buried in a green one #marilynmonroe #pucci #divine #museumofstyleicons