This Irish Sculpture Park Pays Tribute to the Boglands 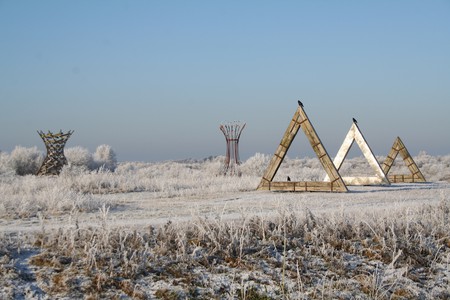 Lough Boora Discovery Park in the Irish Midlands is a peaceful area of ancient bogland that has been transformed from a working fuel source into a natural amenity and a kind of living museum. As part of a rehabilitation project by Bord na Móna energy company, the area is now home to some 24 sculptures, inspired by the history of the surrounding bogs.

The connection of the peat bogs in the Irish Midlands with the country’s history is a profound one. The preservative qualities of peat have allowed items dating back centuries to be recovered in startlingly good condition – most notably the collection of bog bodies now on display at the National Museum of Ireland: Archeology‘s Kingship and Sacrifice exhibition. Lough Boora’s own Mesolithic site was discovered in 1977, uncovering well-preserved campfire sites once used by hunters during the Middle Stone Age, as well as around 1,500 artefacts such as tools and jewellery.

Ireland’s pre-Christian Celtic civilisation had a powerful belief in animism, attributing spiritual qualities or even souls to inanimate objects and places, especially in nature. They organised their calendar around the seasons, and worshipped their environments. The Lough Boora Discovery Park is an attempt to return the boglands to that elevated position, celebrating the contribution they have made to Irish society in terms of providing habitats and fuel, as well as their natural beauty.

At its peak, Lough Boora supplied over a million tonnes of peat every year. Now the cutaway bog here – meaning it’s been discontinued for peat production – has been rehabilitated and returned to the wild. As well as encouraging wildlife to prosper in the park, Bord na Móna energy company have commissioned the creation of a series of large-scale sculptures for Lough Boora, which were made using industrial materials once used to remove peat from the bog, such as railway lines and timber. Nature has been allowed to absorb these permanent structures into the landscape without interference, making it so that they fit seamlessly into the topography while serving as a commentary on some aspect of the bog’s history.

One such sculpture – Tippler Bridge by Kevin O’Dwyer – is a stainless steel tunnel inspired by the huts that Bord na Móna workers used to live in during peat harvests in the area in the 1940s and ’50s. 60 Degrees, also by O’Dwyer, uses a series of triangles composed of disused railway tracks and sleepers to draw attention to the directional lines of sunlight that can be witnessed at the bog on a winter’s afternoon. Another, Cycles by Caroline Madden, more pointedly references the cyclical nature of the relationship between humans and the land.