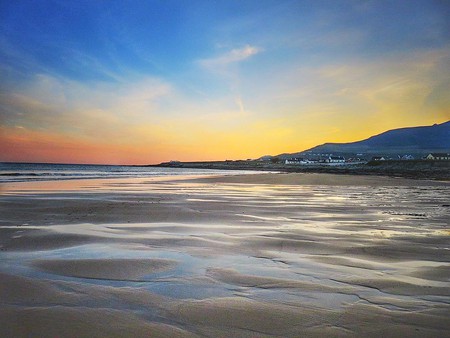 Back in 1984, Dooagh beach vanished into thin air, but miraculously returned in April 2017. Naturally, when most people think of the Ireland the last thing on their minds is ‘beach vacation’ – this however is a grave mistake, as the emerald isle is filled with some of the most stunning beaches the world has to offer.

For the country folk of Dooagh, a cutesy town in the country’s dazzling northwest region, it was sad news when their beautiful beach was engulfed by the ocean. So you can imagine that everyone was quite thrilled when Mother Nature finally decided to return their beloved sandy stream to them.

So how did it disappear? Good question. In 1984 extremely heavy storms (quite common in this part of the globe) hit the small town on the secluded Achill Island, and as a result, sucked all the beach’s sand into the unforgiving Atlantic Ocean – sort of like Titanic but without all the human casualties. The next morning, the townspeople woke up to find nothing more than a bunch of rock pools in the spot where the sea once met the land.

This year, strong winds during spring tides hit the island and returned all the sand over the course of a week or two. And voila, strong wind + tides = brand new 900-foot stretch of pristine beach.

The gorgeous beach may not don the clearest waters in the world, but it’s already attracting the attention of the Irish up and down the country.

Fancy taking a dip in the chilly waters? Do it for the ‘gram.

Want more travel news? A disco floor has just popped up on top of the Sydney Harbour Bridge!