Some of Ireland’s most fascinating art is found outside of galleries, scattered through its city streets. From sectarian wall paintings in Belfast dating back to the Troubles through to modern international street art in Limerick, here are a few of the country’s most powerful murals.

Part Of A Belfast Mural Honouring The Ulster Defence Association 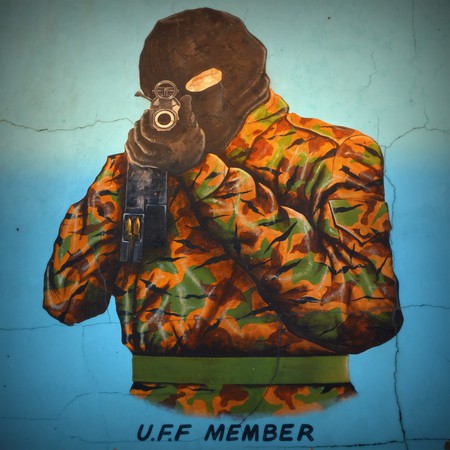 This image of a member of the Ulster Freedom Fighters is part of a larger mural dedicated to the Ulster Defence Association (UDA), an Ulster loyalist paramilitary and terrorist group dating back to the 1970s. It can be found in the mainly loyalist area of west Belfast known as the Shankill. Other elements of this mural include depictions of members of the Ulster Defence Union and its coat of arms. 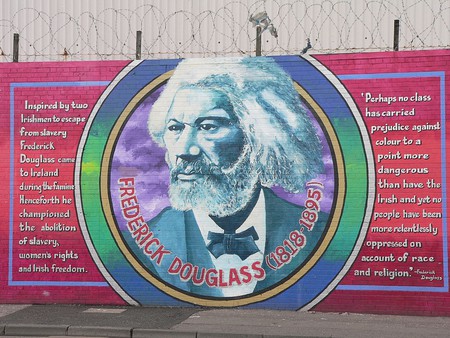 After escaping slavery himself, African-American Frederick Douglass became a revolutionary leader of the abolitionist movement in the US. In the mid-1800s, Douglass travelled to Ireland where he became a friend of the Irish nationalist campaigner, Daniel O’Connell. Douglass became a vocal advocate for the fight for Irish independence, for which he was remembered on Belfast’s ‘Solidarity Wall.’ 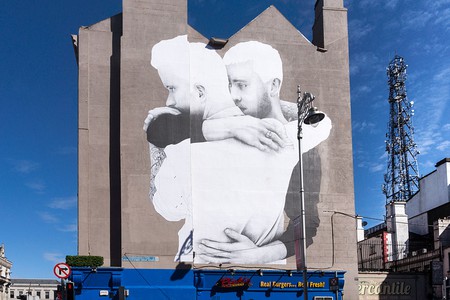 This temporary mural was installed on Dublin’s South Great George’s Street during the successful campaign for marriage equality in Ireland in 2015. Created by artist Joe Caslin, a similar project was completed on the side of a 15th-century tower house castle in the West of Ireland, featuring a 50-foot biodegradable image of a female couple embracing. 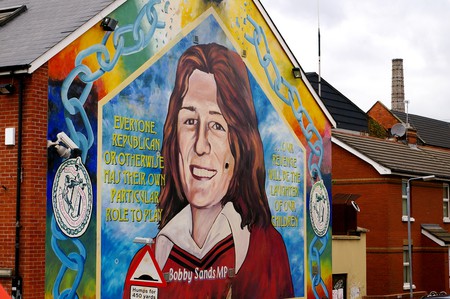 Another Belfast mural memorial referencing the Northern Irish political and social conflict known as the Troubles, this one depicts Bobby Sands – the Provisional Irish Republican Army member who died while on hunger strike at the notorious HM Prison Maze prison. It can be found in the republican area of the Falls Road in west Belfast. 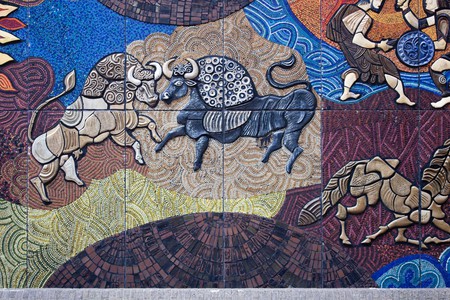 The Senanta Wall – also known as The Táin Wall – mosaic was created just off Nassau Street by Belfast artist Desmond Kinney, whose work featured on many important buildings as well as in private collections, such as that of American multi-millionaire and philanthropist Chuck Feeney. It represents parts of the story of the ancient Irish mythological epic Táin Bó Cuailnge and the life of its hero, known as Cúchulainn (Cúchulainn’s given name, like the title of the mural, was Setanta). 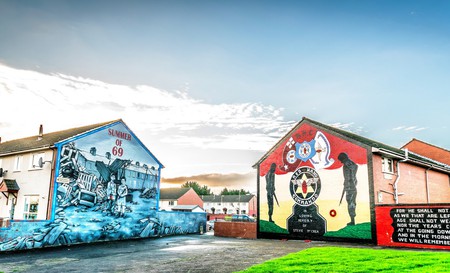 In Shankill, two more murals facing each other commemorate further aspects of the conflict above the border. The mural on the left recalls the 1969 Northern Ireland riots – a period of political and sectarian rioting that is often called the beginning of the Troubles. On the right, a mural remembers the Red Hand Commando, another Ulster loyalist paramilitary group named after the Red Hand of Ulster symbol. 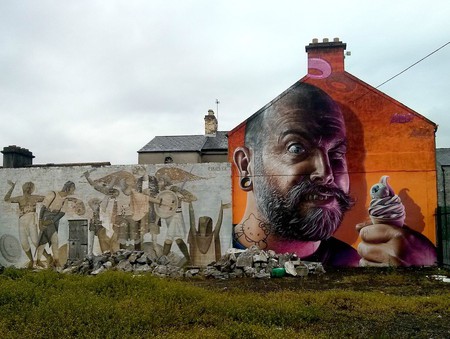 This mural in Limerick was commissioned in 2013 by the city council as part of the local Make a Move hip-hop festival. It is said to have generated some initial controversy due to its location near the 13th-century King John’s Castle, but was ultimately accepted by locals. It was painted by the Glasgow-based street artist Sam Bates, otherwise known as Smug, whose mural in his home city went viral earlier this year. 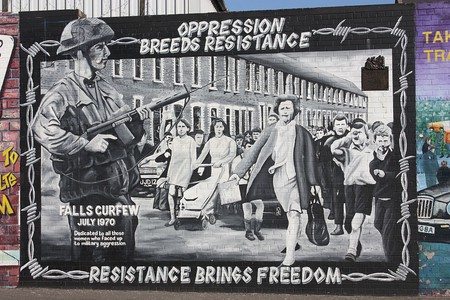 Divis Street in Belfast city centre is the starting point of the Falls Road, marked with a republican mural that celebrates the thousands of women from the west Belfast suburb of Andersonstown, who marched into the Falls district to disrupt a 36-hour curfew that had been imposed by British troops searching houses for weapons during 1970. The women and children brought with them groceries for the locals confined to the area.