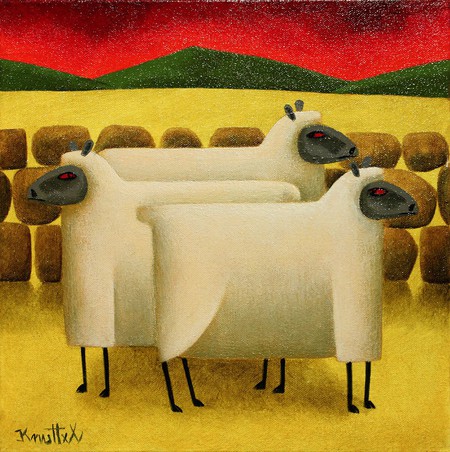 Born in Dublin in 1954, Graham Knuttel is an Irish figurative artist famed for his iconic paintings and sculptures. A graduate of the Dún Laoghaire College of Art and Design, he was influenced by studies of Pablo Picasso and the painter who so strongly impacted him, Paul Cézanne. Today Knuttel’s own work is widely collected, finding homes among the private collections of celebrities like Robert De Niro and Whoopi Goldberg.

Graham Knuttel is said to favour ‘dark and dangerous scenes,’ possibly related in some way to his slightly strange upbringing. His German father – who moved to England with his mother after World War I and later served in the Royal Air Force – has been described by Knuttel as ‘eccentric’ but stories of his grandmother are truly terrifying. Encountering her only once, aged four or five, the experience had a powerful impact on Graham and his art – which isn’t surprising, considering she is said to have tried to lock him inside a wardrobe and scratched at his neck with her nails. He has attributed his interest in drawing long-taloned birds to this frightening moment. Both humans and animals in his work are usually depicted wearing expressions of paranoia, fear and distrust. 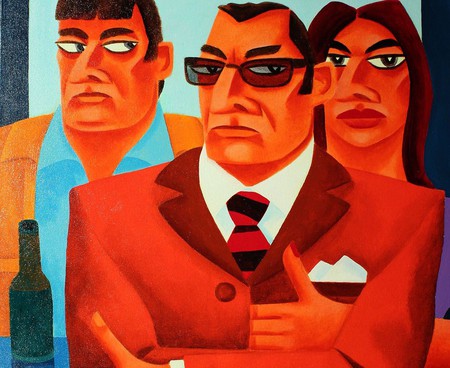 On his mother’s side, things were thankfully less frightening. This branch of the family tree includes Thomas Cooper Gotch – the English Pre-Raphaelite painter who co-founded the Newlyn School of painting in Cornwall – and the Bristol-born actor Archibald Leach, better known by his screen-name, Cary Grant. After meeting Graham’s father, his English mother and their two children moved with him to Ireland in 1947, seven years before Graham was born.

Graham showed little interest in education prior to enrolling in the Dún Laoghaire College of Art and Design (now part of the Institute of Art, Design and Technology) at the age of 18. Here, he turned his childhood love of drawing and painting into an impressive portfolio. However, his characteristically bold and brooding style wasn’t appreciated immediately – he had to move into the realm of sculpture in order to graduate. This ignited the love for crafting large mechanical wooden sculptures that would stay with him for many years. 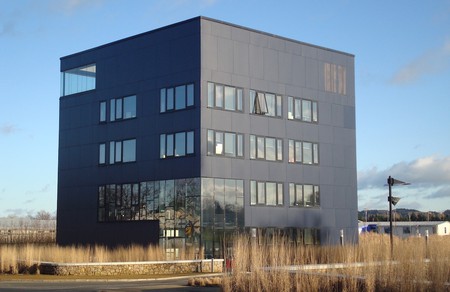 His creations soon got the recognition that had been lacking during his degree. In 1976, aged 22, he won the Royal Canada Trust Award for young Sculptors. Five years later, in 1981, he set up the Wicklow Fine Art Press, where he received commissions to paint for people like actor Sylvester Stallone, Irish writer John B. Keane and boxing promoter Don King. His work can also be found at the Swiss Bank Corporation, Goldman Sachs International and Saatchi & Saatchi London.