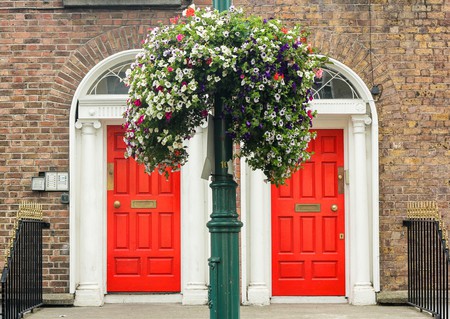 The vibrantly coloured doors of Georgian buildings have become an important and instantly recognisable visual symbol of Dublin city, regularly appearing on postcards and their digital equivalent, Instagram. But where did the idea come from, and how did it get so popular? Here we explore the history behind Dublin’s painted doors.

There are a few urban legends about why upper-class Georgian Dubliners began painting the doors of their homes in bright, vivid colours. Several of them lead back to the Irish writer George Moore, who lived at Number 4, Ely Place at the beginning of the 20th century. One story is that Moore painted his door so that another writer who lived on the other side of the street, Oliver St. John Gogarty, would stop mistaking Moore’s house for his own after returning home drunk from the pub. Another story came from the poet W.B. Yeats, who wrote that Moore began the practise for artistic reasons, being of the opinion ‘that the whole decoration of his house required a green door.’ Whatever his reasoning, Moore is widely documented as having fought with neighbours over his green door.

Just a few more days of celebrating our design issue–this is exactly the kind of thing that gives us inspiration! #DoorsOfDublin by @theartofexploring. 💙🚪 #TravelerInDublin

Whether or not George Moore actually began the door-painting craze, it did catch on, for obvious reasons. The period of architectural development termed Georgian Dublin that took place in the city from the early 18th to the early 19th centuries was characterised by a uniform style due to building regulations at the time – meaning all the new houses in a particular area looked exactly the same. Painting the doors an unusual colour was the only way for the people who lived in these affluent new developments to make a house distinctive from the outside. 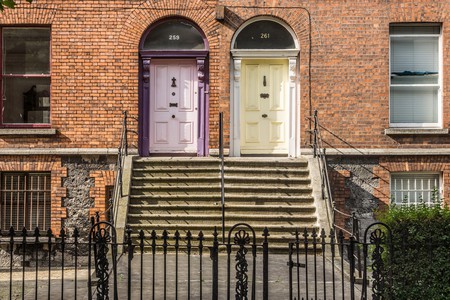 The transition of Dublin’s coloured front doors from an idiosyncrasy into a cultural attraction happened in 1970s New York close to Saint Patrick’s Day. A collage of Dublin doors was placed in the window of the Fifth Avenue Irish Tourism Office, generating an unexpected level of interest from passersby. Soon, the North American manager of Ireland’s tourism board had commissioned a poster to be made of the popular collage, and the image became an emblem for Ireland.

The best places to look for authentic Georgian Dublin doors are on the south side of the city centre, around the final few developments completed during the period – Merrion Square, Saint Stephen’s Green and Fitzwilliam Square. Besides their telltale bright hues, you’ll spot them by their fanlights – a semi-circular over-door window featuring radiating panes. 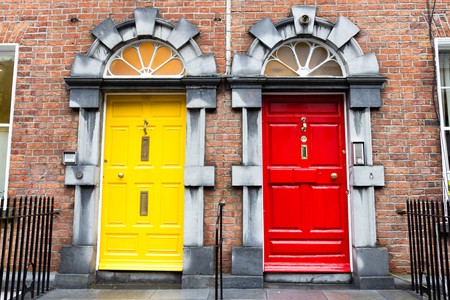