Not just the capital of Ireland, Dublin is also the country’s capital of contemporary art. From small cutting-edge galleries in Georgian houses, to large innovative stage-of-the-art spaces, Dublin is an oasis for any art-lover. The focus of a previous Culture Trip article, here is an updated list of the best contemporary art galleries, to reflect the everchanging art scene in the Fair City. 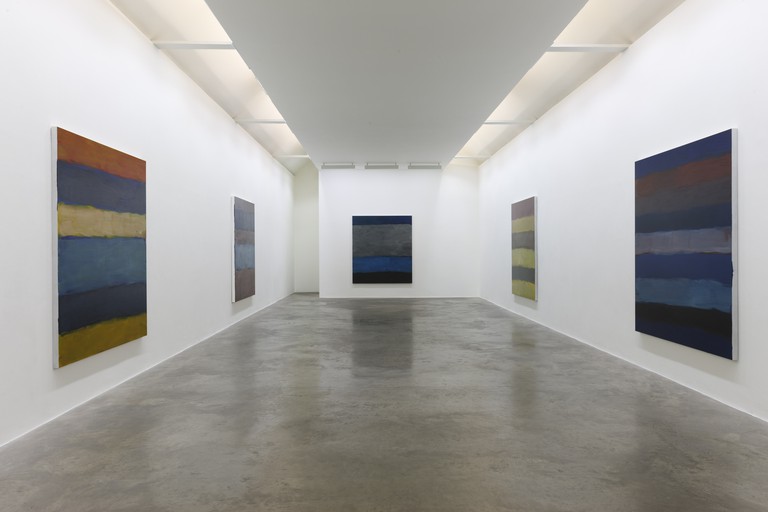 Kerlin Gallery is an essential part of Ireland's contemporary art scene | © Sean Scully / Kerlin Gallery
Founded in 1998, Kerlin Gallery has developed a reputation as one of Ireland’s leading contemporary art galleries. Its current space was designed in 1994 by the architect John Pawson, and is spread over two floors. Located in the heart of Dublin city near Grafton Street, the gallery’s exhibition programme has featured a number of highlights, such as an Andy Warhol retrospective in 1993, numerous solo Sean Scully shows, and two Hiroshi Sugimoto exhibitions. Recent exhibitions include the work of notable Irish artist Dorothy Cross, with her new sculptures and photographs that explore the connection between humans and the natural world. The gallery has also featured a number of artists that have been shortlisted for the coveted Turner Prize, and has supported artists abroad at the Venice Biennale. With a growing list of important artists involved with this venue, Kerlin Gallery will remain pivotal in Dublin and Ireland’s contemporary artistic sphere.
Open In Google Maps
Anne's Lane, Dublin 2, County Dublin, D02 A028, Ireland
+35316709093
Visit Website
Give us feedback

Art Gallery
Facebook
Email
Twitter
Pinterest
Copy link
Share
Map View
Situated on Molesworth, and close to Leinster House, is the small but mighty The Molesworth Gallery. Spread over two floors of a Georgian townhouse, The Molesworth Gallery has a rich and diverse exhibition programme, hosting on average eight solo shows and two group exhibitions annually. The gallery, founded in 1999, represents around 20 up-and-coming, as well as established, Irish artistic talent, and collaborates with other art centres and museums in promoting their artists. The first floor usually features a changing display of painting, sculpture and prints by its collection of Irish artists. This gallery regularly features on critics’ lists as one of the best contemporary art galleries in Dublin, and is definitely worth a visit.
Open In Google Maps
16 Molesworth Place, Dublin 2, County Dublin, Ireland
+35316791548
Visit Website
Give us feedback 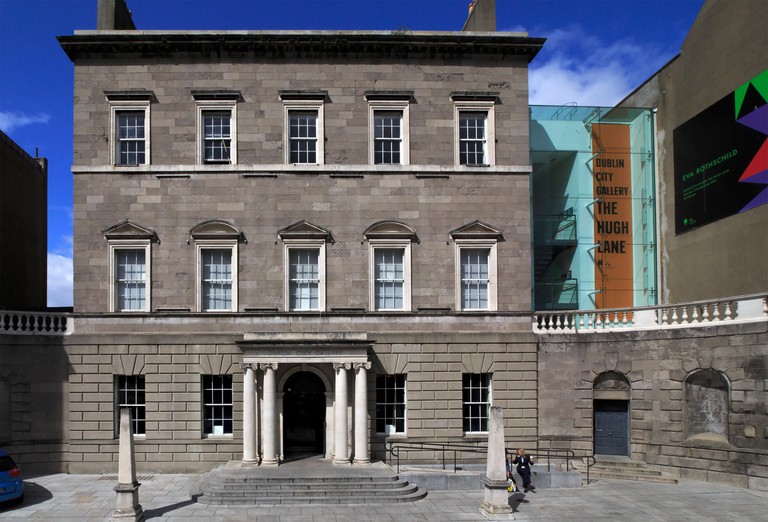 Dublin City Gallery The Hugh Lane celebrates Irish art | © Iuliia Mashkova / Alamy Stock Photo
Named after the notable Irish art collector and public figure Hugh Lane, Dublin City Gallery The Hugh Lane was established in 1998. One hundred years earlier, Hugh Lane opened The Municipal Gallery of Modern Art on Harcourt Street, as temporary premises for his art collection, but tragically died in the sinking of the Lusitania in 1915. The Dublin City Gallery The Hugh Lane has continued on his legacy. The gallery is located on Parnell Square in Charlemont House; the architecture of the venue is unique to its location, and is in contrast to its surrounding typical Georgian architecture. Important aspects of the gallery are Irish artist Sean Scully’s bequest of his works, and the recreation of the studio of the iconic Francis Bacon, as well as Bacon’s archive of books, slashed canvas, material and collection of photographs.
Open In Google Maps
Charlemont House Parnell Square North, Rotunda, Dublin 1, County Dublin, D01 F2X9, Ireland
+35312225550
Visit Website
Give us feedback

Art Gallery
Facebook
Email
Twitter
Pinterest
Copy link
Share
Map View
The home of digital and film photography in Ireland, Gallery of Photography Ireland came into being in 1978 when it was opened by John Osman. It moved to its current location in Dublin City’s Meeting House Square in 1995, a purpose-built space with fully-fitted darkrooms and digital imaging facilities. The gallery organises a wide variety of free exhibitions that showcase and spotlight the work of many Irish and global photographers. The space also hosts workshops and courses for those who wish to learn and develop their skills in the art of photography. As well as hosting exhibitions of big names, like Steve McCurry (known for his ‘Afghan Girl’, featured on the front cover of National Geographic in June 1985), Gallery of Photography Ireland also supports newcomers, organising graduate exhibitions both north and south of the border.
Open In Google Maps
Meeting House Square, Temple Bar, Dublin 2, County Dublin, Ireland
+35316714654
Visit Website
Give us feedback 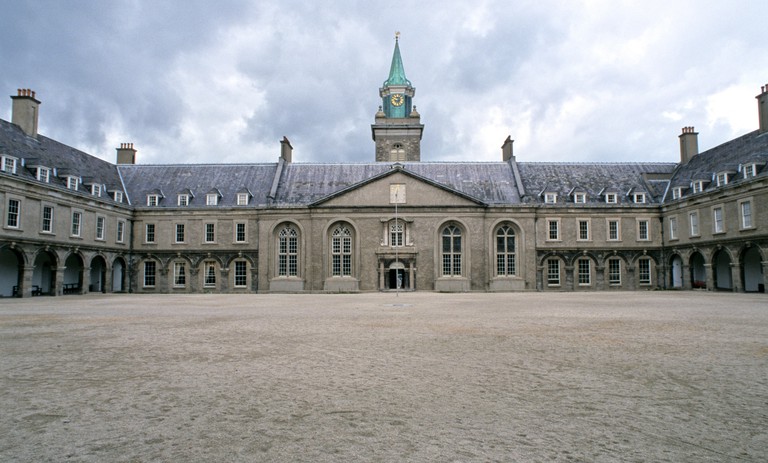 IMMA is housed in an old hospital building, inspired by Les Invalides in Paris | © Vincent MacNamara / Alamy Stock Photo
Irish Museum of Modern Art (IMMA) is based in a renovated 17th century hospital, resulting in a unique clash between contemporary cultures and historical residues. The building’s style is based on Les Invalides in Paris, with a formal facade and a large elegant courtyard; the hospital was restored in 1984 and officially opened as the Irish Museum of Modern Art in May 1991. IMMA hosts a wide range of regularly changing exhibitions, from celebrated Irish designers such as Eileen Gray, to international artists like Philippe Parreno. More recent shows include Second Sight, a collection of 550 photographs created over the last 20 twenty years by Dr David Kronn, which were a promised gift to IMMA. IMMA is a fusion of old and new, on the one hand celebrating past artistic achievements, and on the other pushing boundaries by promoting cutting-edge contemporary art.
Open In Google Maps
Royal Hospital Kilmainham Military Road, Kilmainham, Dublin 8, County Dublin, Ireland
+35316129900
Visit Website
Give us feedback

Art Gallery
Facebook
Email
Twitter
Pinterest
Copy link
Share
Map View
Project Arts Centre started from humble beginnings as a one day-event, which evolved into a three-week festival, taking place at the Gate Theatre in 1966. Its popularity sparked the need to establish a permanent gallery space dedicated to the contemporary arts. Since 2000, the centre has been located in Temple Bar, and consists of two performance spaces and a gallery. Over the past four-and-a-half decades, Project Arts Centre has become a leader in contemporary artistic practice in Dublin and in Ireland. Not only is the centre a launching pad for many famous artists, such as Gerard Byrne, but the venue has also been pivotal in establishing the careers of musicians and actors, like U2 and Liam Neeson. In addition to over 600 events and six exhibitions per year, Project Arts Centre also hosts a number of local and internationally focused festivals, including Dublin Writers’ Festival, Dublin Theatre Festival and Dublin Fringe Festival.
Open In Google Maps
39 Essex Street East, Temple Bar, Dublin 2, County Dublin, D02 RD45, Ireland
+35318819613
Visit Website
Give us feedback

Art Gallery
Facebook
Email
Twitter
Pinterest
Copy link
Share
Map View
RUA RED defines itself as the South Dublin Arts Centre: home to all types of art aimed at all members of the community. Located in the emerging cultural quarter of Tallaght, which is outside Dublin city centre, RUA RED’s artistic programme aims to inspire and engage Irish and international audiences. The venue collaborates with local festivals and organisations to create a diverse range of events and programmes, but it also organises visual art exhibitions (in its two galleries), theatrical productions, live music events, film screenings, performance pieces, dance recitals, and creative writing workshops. RUA RED is worth the excursion from Dublin city centre as there is plenty to hear, see and do at this arts venue.
Open In Google Maps
Blessington Road, Tallaght, Dublin 24, County Dublin, D24 KV8N, Ireland
+35314515860
Visit Website
Give us feedback

Initiated in 1995 and situated on Dublin’s famous St Stephens Green, Rubicon Gallery is a main contributor to Ireland’s contemporary art scene. The gallery’s core objective is to help Irish and international artists realise their ambitious projects, making them a household name both in Ireland and around the world. The gallery hosts around ten exhibitions annually, typically solo shows, but occasionally curates group exhibitions, as well as producing a number of publications. The Rubicon has also developed a reputation abroad, representing a number of artists at international art fairs, events and biennales, but it also commissions new works, and acts a springboard for lesser-known international talent. Rubicon Gallery’s portfolio of artists includes the landscape painter Donald Teskey and multi-disciplinary artist Stephen Brandes.

Temple Bar Gallery + Studios (TBG+S) was established in 1983 by a group of artists and administrators, becoming one of the first DIY artist-centred initiatives in Ireland. This group was housed in a rented disused shirt factory which extended through a block on Temple Bar towards the quays. As Temple Bar became a cultural and tourist hub, the gallery space contributed to and developed with the area’s rejuvenation during the 1990s. The shirt factory received a major facelift, with 30 artist studios and a sizeable gallery on the ground floor, with large windows to maximise light and the sense of space. Temple Bar Gallery + Studios officially took occupation of these premises in 1994. Thirty years on since its inception, TBG+S continues to support upcoming artists, as well as connecting the public with radical Irish contemporary art, with exhibitions of varying themes and media, from performance art to painting and installations. 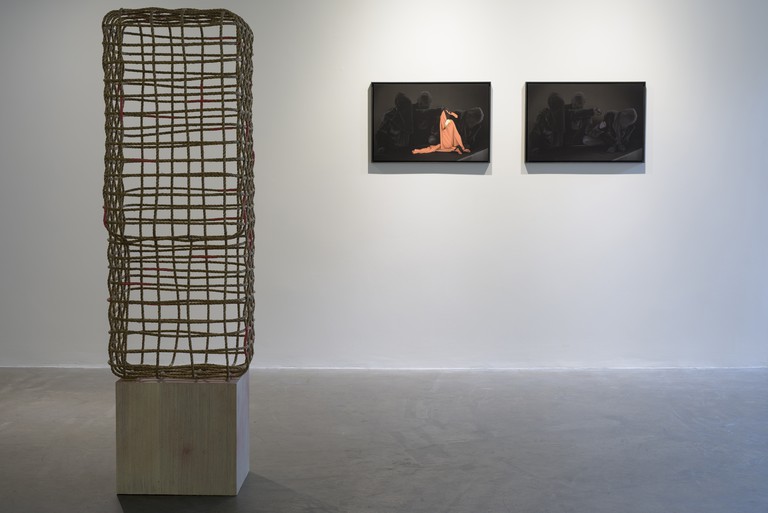 The Douglas Hyde Gallery was Ireland's first publicly funded contemporary art gallery | © Haugh
Founded in 1978, The Douglas Hyde Gallery officially became independent of Trinity College Dublin in 1984. In the years that followed, the gallery was one of the only publicly funded artistic spaces in Ireland that focused solely on contemporary art. Nowadays, The Douglas Hyde singles out artists who have been marginalised or overlooked, both at home and abroad, to feature as part of their exhibition programme. This gallery punches above its weight, with two small but inviting gallery spaces. The smaller second space, which was added in 2001 and has since won a number of architectural awards, regularly hosts ethnographic and craft exhibitions. In addition to these, the gallery hosts music events and produces a number of publications, meaning this small space features largely on Dublin’s contemporary art map.
Open In Google Maps
Trinity College Dublin 2, County Dublin, Ireland
+35318961116
Visit Website
Give us feedback
Give us feedback