Cork's English Market: Make The Most Of This Victorian Gem

Established in 1788, The English Market is one of the world’s oldest municipal markets and a beloved part of the Cork city retail landscape. Full of fresh organic produce, lively characters and rich history, this Victorian covered market has been visited by the Queen of England and was called ‘the best in the UK and Ireland’ by celebrity chef and restaurateur Rick Stein.

Cork’s principal food market owes its name to Ireland’s long and complicated relationship with the English. In 1788, when Cork city was still run by a Protestant or ‘English’ municipality, the first market was created at the site where the current English Market stands. When a Catholic ‘Irish’ corporation took over the running of the city in 1840, the newly formed Market Committee decided to open another indoor food market. From the time that St. Peter’s Market was completed at Cornmarket Street three years later, the former was referred to as ‘The English Market’ and the latter as ‘The Irish Market’, to clearly distinguish between the two. 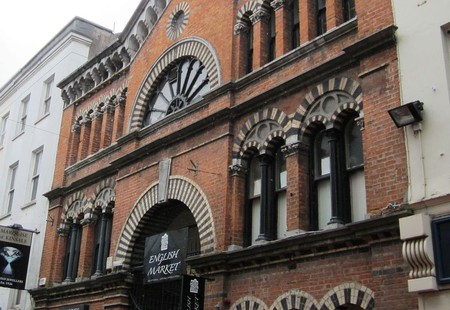 Though elements date back as far as 1788, the current configuration of The English Market only came into being in the 19th century. Over time, the original collection of meat and fish stalls at the main street of Grand Parade had merged with the Root Market for vegetables on nearby Princes Street, and in 1862, the Market Committee commissioned a grand new entrance and a roofed building for the Princes Street side, now recognised as the main access point. The architect Sir John Benson created a second-floor balcony area and an ornamental entryway in this part of the market, which officially opened in December of 1862. During the 1880s, a new entrance was also built at the Grand Parade end. 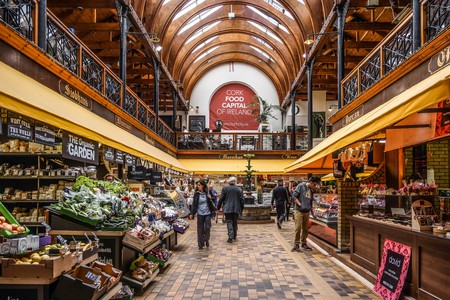 The English Market is best enjoyed at a leisurely pace, strolling through its aisles – ideally more than once – to take in the sights and smells wafting from stands selling freshly baked cakes and bread, organic fruit and vegetables, newly caught and smoked fish, and more. But if you’re under time pressure, there are a few stalls that should be prioritised. The Alternative Bread Company’s broad range of hand-rolled breads incorporates the traditional items you would expect but also offers gluten-free and spelt options, and their brown health loaf has made them a household name with Cork’s health-conscious bread lovers.

We have new bread baskets!🍞 Now we will actually be able to see all your lovely faces rather than searching through the big tall signs for them, YAY 😁 #ForrestOfFaces #ArtisanBread #ABCBread #AlternativeBreadCompany #TheEnglishMarket #DairyFree #Sugarfree #WheatFree #GlutenFree #Vegan #CorkFood

A photo posted by The Alternative Bread Company (@alternativebread) on Aug 19, 2016 at 6:37am PDT

The Farmer stall can be relied on for the best seasonal fruit and vegetables, as well as duck eggs and homemade jams. Kay O’Connell’s fish stand has been trading for over 40 years and is now run by Kay’s two sons, Pat and Paul. (Pat was pictured with Queen Elizabeth II when she visited the market in 2011.) Bresnan’s Butchers can boast the accomplishment of being the longest-trading family at the market, having set up shop back in 1898. Their meat has been featured twice in the Sally & John McKenna Bridgestone Guide. Meanwhile, The Real Olive Company stall stocks around 20 different kinds of olives, as well as making their own buffalo mozzarella at their Toons Bridge Dairy. Their next-door Sandwich Stall selling freshly-made lunch foods daily is another of the market’s most popular.

At The English Market, veteran traders work alongside the newest retailers. This year, The English Market set up a new initiative called ‘the start-up stall’, allowing fledgeling traders the chance to do a four- to six-week residency at a purpose-built stand at the far end of the Grand Parade si‌de of the market (unit 3 – see layout plans here). Featured traders so far have included Elbow Lane Brewery and Smoke House and their ‘Smoke House Sauce’. The fish aisle is on the left side of the Grand Parade section, if entering from Princes Street, and most of the butchers are in the Grand Parade section also.

Getting some more Dry Rub jars ready for another busy weekend. Pick some up from us this eve and get creative with your cooking! #elbowlanecork #dryrub #smokehouse #nanobrewery #restaurant #corkeats #corkfood #foodie #creativecooking

📅 The English Market is open Monday to Saturday from 8am to 6pm and closed on Sundays and Bank Holidays. As with most attractions, it’s best to visit outside peak hours of 11.00am-4.30pm daily, especially on Fridays and Saturdays.