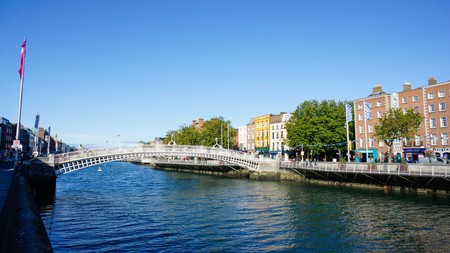 Dublin’s luxury accommodation options range from modern spa hotels nestled among the city centre’s tallest buildings to historic Georgian townhouses. To enjoy the finer things in life in Dublin, these five-star hotels will make for a relaxing and luxurious trip. 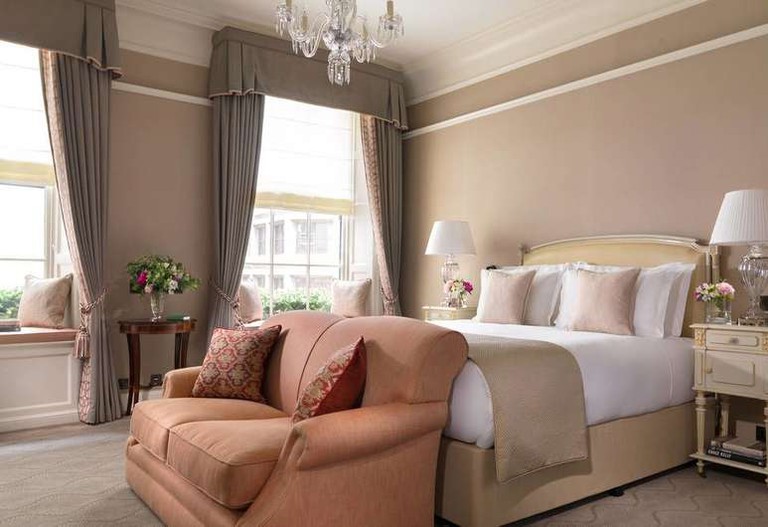 Courtesy of the Shelbourne Dublin / Hotels.com

Operating since 1824, this spectacular red-brick Victorian hotel in front of St Stephen’s Green is ideal for those looking for a luxury break in the heart of the city. From the bellhops and butlers to the concierge, the excellent standard of service has drawn in countless celebrities over the years; previous guests have included Bill Clinton, Princess Grace of Monaco, Charlie Chaplin and the Kennedys. The Irish constitution was even drafted in the conference rooms of the hotel, and old oak furnishings and glass chandeliers emphasise its distinguished history. Family-friendly rooms are available, while excellent dining options, including an exceptional afternoon tea in the Lord Mayor’s Lounge, guarantee a comfortable stay for all guests. 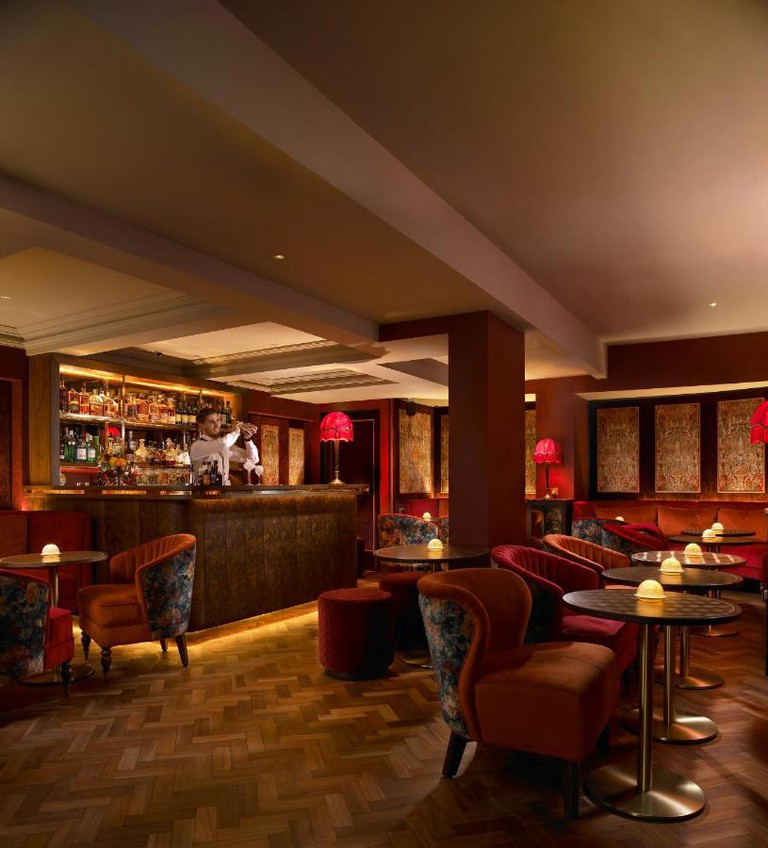 Courtesy of the Dylan / Booking.com

Formerly the nurse’s home for the Royal City of Dublin Hospital in the picturesque neighbourhood of Rathmines, the edifice of the The Dylan is a striking combination of Victorian grandeur and a more modern extension. With stylish interiors focussed on Irish design and luxurious touches such as underfloor heating in the bedrooms and Italian marble bathrooms, this is five-star opulence at its best. Dining options in the hotel include the award-winning Dylan Bar, the Eddison Restaurant and the Nurserie Terrace, where visitors can enjoy everything from a light pastry to a gourmet meal. The hotel even has a bar, The Ruby Room, exclusively for guests. 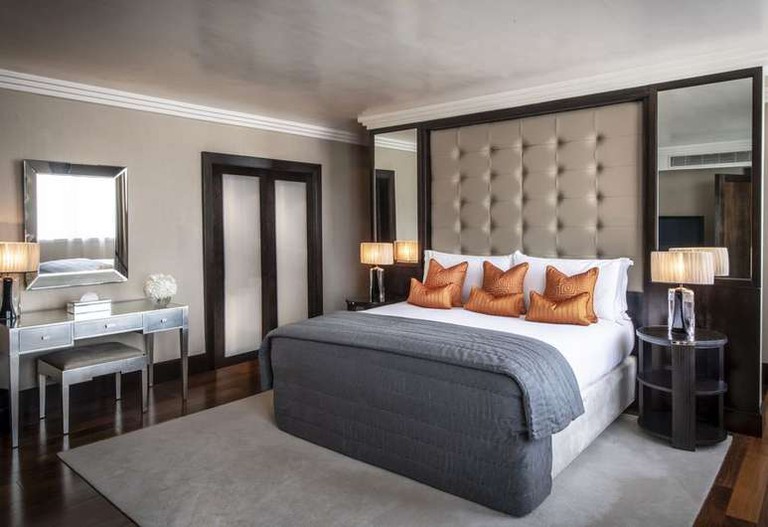 The family-owned Westbury provides personal touches such as child-friendly rooms and friendly 24-hour front-desk service. The hotel’s vintage-inspired decor and central location are part of its charm; this luxury hotel is on Grafton Street, right in the middle of the Creative Quarter. The area is filled with pubs, shops and restaurants waiting to be explored, and the famous Gaiety Theatre, which has housed pantomimes and theatre productions since 1871, is just steps away. View the hotel’s art collection in The Gallery or sample one of the concoctions in Sidecar, the hotel’s 1930s-style bar, which was awarded Best Hotel Bar at The Irish Craft Cocktail Awards 2018; it’s just one of many excellent cocktail bars in the city. 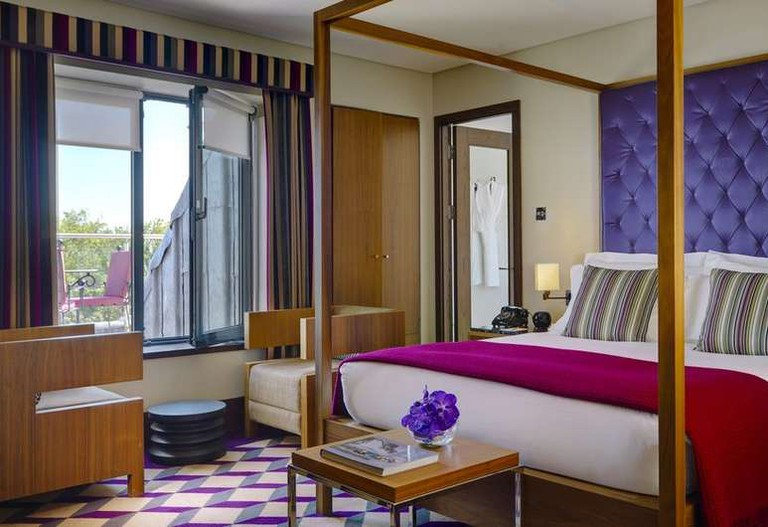 Courtesy of the Fitzwilliam Hotel / Hotels.com

The Fitzwilliam Hotel has some of the best views in Dublin, with balconies in the front rooms overlooking the quaint streets around St Stephen’s Green. Despite the fact that the hotel has 139 rooms, it retains the charm and personal touches of a small boutique venue, and each of the 139 rooms is uniquely designed. The staff of the Fitzwilliam are noted for their extensive knowledge about the city; ask them for anything, from a dinner recommendation to transport advice, and they’ll be able to help. For a break from the city bustle, the Spirit Salon offers a range of holistic treatments such as aromatherapy and deep-tissue massages. 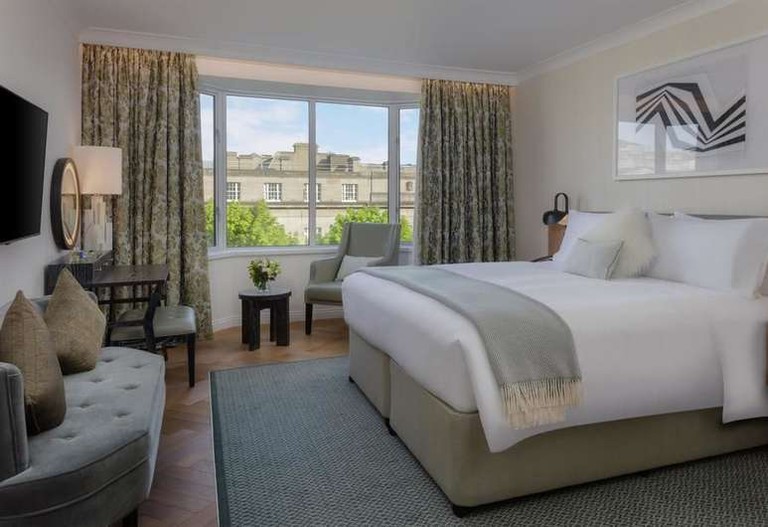 Filled with light, and with minimalist design inspired by the greenery of the nearby Iveagh Gardens, The Conrad Dublin is a luxury hotel right in the city centre. It has 191 magnificent rooms, and the huge Presidential Suite is the largest in Dublin, having played host to the likes of Bill and Hillary Clinton and David Bowie. The hotel’s restaurant, Lemuel’s, is inspired by Dublin resident Jonathan Swift’s novel Gulliver’s Travels, with a literary-themed menu that takes the diner around the globe. For an after-dinner nightcap in an intimate location, head down to Alfie Byrne’s bar in the basement, which serves up specialist craft beers and Irish spirits. This luxury hotel also has a quirky touch – it’s occasionally home to Stephen Clare, the world’s first ‘limerick butler’, who will write you a custom poem on your arrival at the hotel. 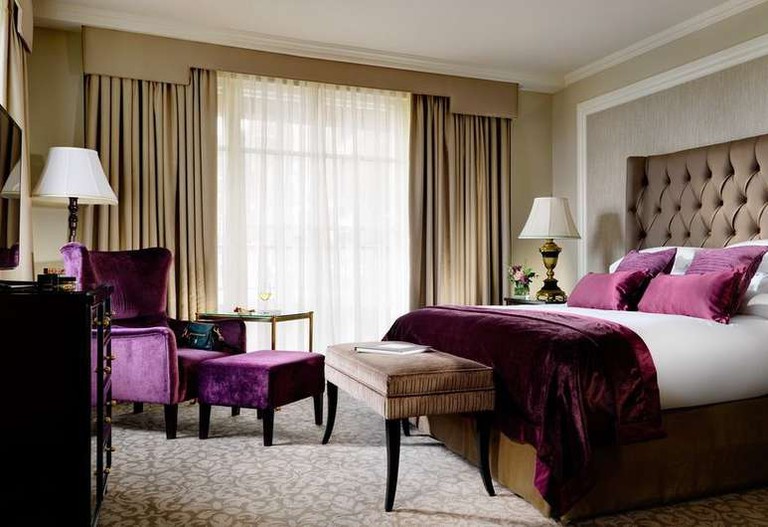 Courtesy of InterContinental Dublin / Hotels.com
Surrounded by ivy-covered houses and cobbled streets, the InterContinental is a taste of Old Dublin at its finest. Close enough to the city centre to be convenient, but just far enough away to create an air of tranquillity, this is the perfect luxury hotel in Dublin for a relaxing city break. It’s Irish-owned, and there’s an emphasis on local sourcing, from the ingredients on the menu to the decor in the guest rooms and the art on the walls of the lobby. The Whiskey Bar and Lobby Lounge are open all day, and in the summer guests can relax in the courtyard Perrier Jouet champagne bar. One of the main draws of this luxury hotel is the spa; it features a pool, a well-equipped gym, a hot tub, treatment rooms, a sauna and steam room, and a relaxation area complete with herbal teas and daily newspapers. 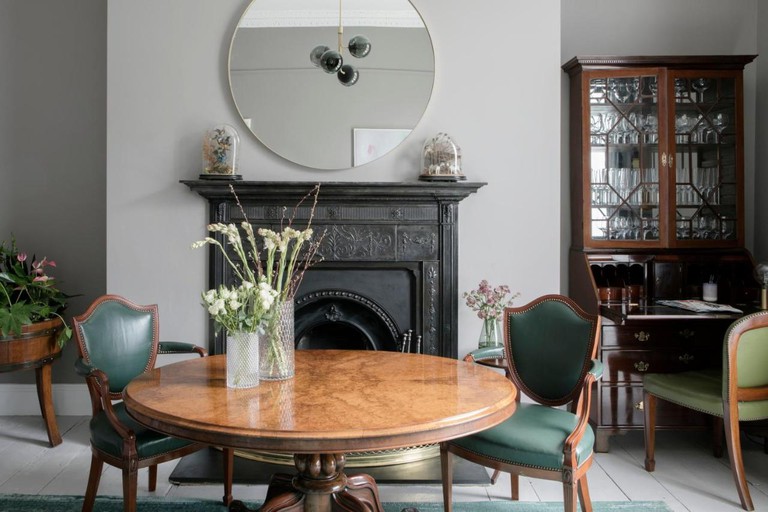 This hotel is set in a mid-terrace four-storey Georgian townhouse, and the restored Pembroke Hall combines modern design with original features such as grand stone fireplaces. This luxury hotel provides en-suite double bedrooms for its guests, as well as a shared drawing room and courtyard where guests can relax. Although no breakfast service is offered, they recommend the full Irish at the nearby Roly’s Bistro. The hotel is within walking distance of the city centre and has easy access links to the outskirts and Dublin’s coastal towns on the DART. 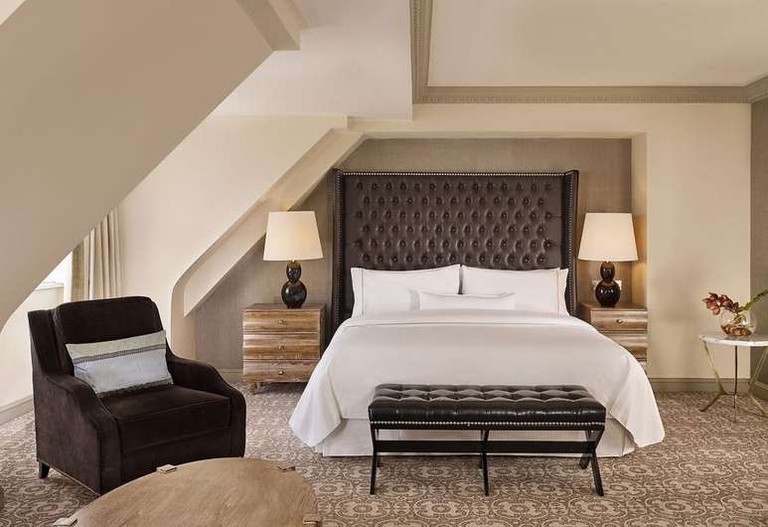 Right beside the historic Trinity College Dublin campus, as well as Ireland’s original Parliament House and the entertainment area of Temple Bar, The Westin Hotel is in Dublin’s most desirable location. Many of the Westin’s traditional features, such as the ornate ceilings and arches of the 19th-century Banking Hall conference room, have been maintained. With 172 rooms, a well-equipped gym and even a ‘book butler’ (who can recommend a great read for your time in the city), The Westin Hotel combines five-star luxury with traditional Irish hospitality. The hotels’ dining options include fine cuts of Irish beef at the Morelands grill room, and the Mint Bar, with its vast selection of gins and whiskeys, is the ideal destination for a nightcap. 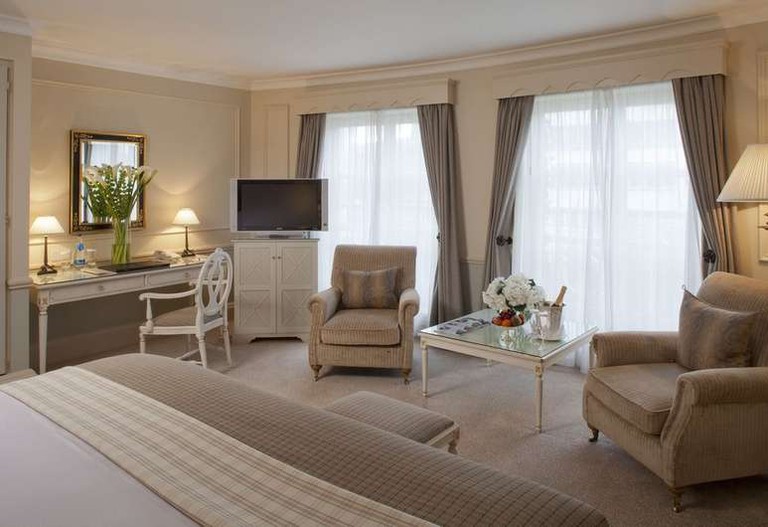 Courtesy of the Merrion Hotel Dublin / Hotels.com
Located in the very heart of Georgian Dublin, the Merrion Hotel is surrounded by the best of the city’s cultural, shopping and entertainment attractions, including the National Gallery of Ireland and the National Museum. The Merrion combines classic hospitality with luxurious modern touches; crackling peat fires welcome guests into the drawing rooms, and the state-of-the-art gym and spa area features a sauna, steam room and infinity swimming pool. For dining, The Drawing Rooms offer an art-themed afternoon tea that takes inspiration from the work of artists such as JB Yeats and William Scott, but the two-Michelin-star Restaurant Patrick Guilbaud is the hotel’s main talking point. 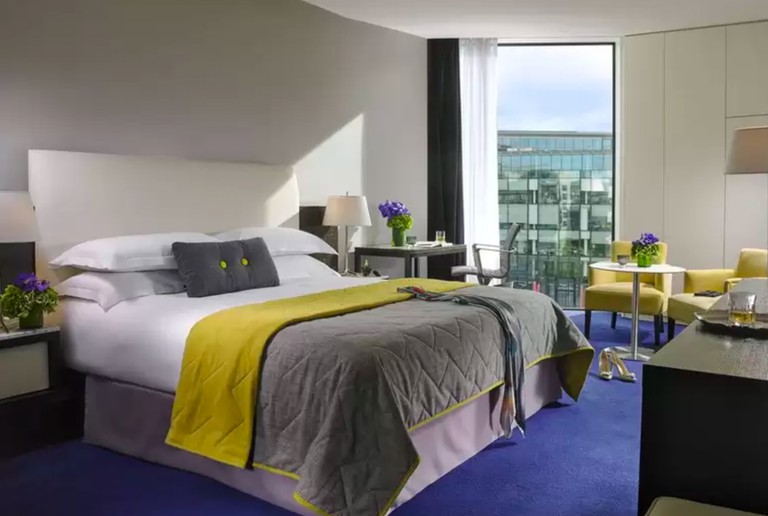 With its distinctive chequerboard facade, The Marker has become something of a landmark on the Dublin Docklands. Inside, the hotel spa is a definite highlight; it includes an infinity pool with a whirlpool feature and a relaxing sauna. For an evening of good food and the arts, ask the hotel staff to book you a show at the Bord Gáis Energy Theatre next door and enjoy a gourmet meal in the hotel’s Brasserie restaurant, where a pre-theatre menu of three courses is available for just €36. This luxury hotel has good access links to the rest of Dublin, with Grand Canal Dock and Pearse Street train stations just under 10 minutes’ walk away. The rooftop bar is another draw for guests; sip on a cocktail while gazing out over the water and the fair city of Dublin.