The Best Things to See and Do in Stoneybatter, Dublin

Love Supreme in Stoneybatter | Courtesy of Love Supreme
If Dublin has a hipster heartland, it’s a toss-up between Stoneybatter, an area to the east of popular Phoenix Park, and the fast-rising jungle of The Liberties and Newmarket. Stoneybatter isn’t just for those with a penchant for moustaches, kale smoothies and tiny boutique cottages, however; it’s a bustling cultural corner in its own right, a natural hub of the city’s creative types, and full of great design and enticing attractions.

You could go here just for the coffee and buns and spend quite a contented afternoon just consuming a whole lot of calories. Let’s put that aside, though, and go through what we really think you should check out.

Probably the very heart of Stoneybatter’s organic foodie love-in, L. Mulligan’s is half restaurant, half pub, and entirely enthralling. From a wild boar burger to their own take on that Irish staple black pudding, they’re excellent on the cuisine front, but also host a string of live music and cultural events that keep the place fresh and interesting. They also have a fantastic beer and gin selection; it’s like an old Irish pub, but souped up into something wholly more varied and colourful. It’s worth a detour for their elaborate whiskey store in town, too.

The perfect place to dig into Stoneybatter’s more hippie side, The Elbowroom specialises in areas like yoga, meditation, Pilates and fitness – in fact, almost anything that falls under the heading ‘general wellbeing’. They’ve developed a stellar local reputation for quality and affordability as an ‘urban retreat’, and quite a lot of the classes are available for one-off drop-ins. That means the Elbowroom makes for a great way to connect with like-minded locals and chill out during a Dublin stay.

Church
Once the only church on the north side of Dublin for over half its life (and technically very slightly outside of Stoneybatter), St Michan’s dates back to 1095, and still contains a very similar interior to the one you would have found had you visited in Victorian times. The basement is the main draw for most visitors, however, containing the mummified remains of a number of notable local families who lived in Dublin between the 17th and 19th centuries. It’s well worth paying for a tour to get the full effect.
Looks like it's closed Hours or services may be impacted due to Covid-19
More Info
Open In Google Maps
Church Street, Northside, Dublin 7, County Dublin, Ireland
+35318724154
View menu
Visit website
Visit Facebook page
Send an Email
Give us feedback

A little-acclaimed but very worthy point of historical interest in Dublin, Arbour Hill Cemetery contains the graves of many of the key figures in Ireland’s failed 1916 rising. Located between Stoneybatter and Phoenix Park, you’ll discover the last resting places of Irish household names like Patrick Pearse and James Connelly. The bodies of the revolutionaries were transported to Arbour Hill after they were executed in the notorious prison of Kilmainham Gaol (also now a tourist attraction). The key feature today is a large stone wall bearing the names of the men buried here.

Perhaps Dublin’s second most notable traditional music bar (it would be hard to come in ahead of the ever-crammed home of The Dubliners, O’Donoghue’s, on Merrion Row), The Cobblestone is slightly more ‘in the know’ then its acclaimed city-centre alternative. It’s a rugged old pub – literally tumbling down in parts of the beer garden – but endlessly busy regardless, with tin whistles and banjos on the go in every corner, and more varied gigs hosted in its compact back room. There’s a community around this place, which gives it a more intimate feel than the city centre alternatives, and it also has a little of a ‘step back in time’ buzz to it. It’s just outside Stoneybatter, on the north end of Smithfield Square.

The Hungry Tree is a small but comical landmark found in the grounds of the 19th-century Kings Inn (a college for barristers and other lawmakers), consisting of nothing more than a tree that has grown around an old bench, and now looks like it is swallowing the bench whole. That makes for a great little photo opp, as at the right angle you can make the tree look like it’s about to eat you, too. The bench is thought to have been there a little over 200 years.

An obvious but critical factor in Stoneybatter’s current popularity is its proximity to Phoenix Park, Dublin’s massive green lungs. A short stroll from the ‘Batter’s main street brings you in through the park gate not far from Dublin zoo. In the park itself you can stroll with a coffee, check out the Papal Cross or the President’s house, go looking for the ginormous herd of deer that freely leap through the grounds, or take in the visitor centre, where you’ll learn about the history of the place. How big is it? You could easily run a half marathon in the park without ever taking the same street twice. Idyllic. 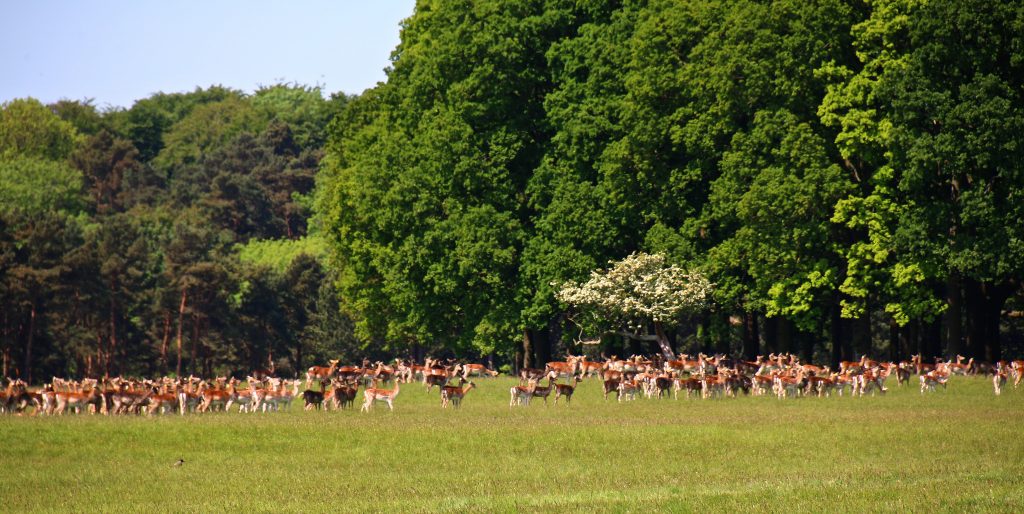