An Introduction To The Cranberries In 10 Songs 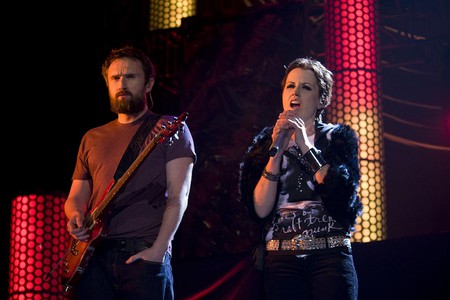 Few bands are more synonymous with the 1990s than The Cranberries. One of the most successful supergroups of that decade and one of few still garnering airplay, they created a unique brand of Celtic-influenced alternative rock that turned them into international household names. We remember ten of the songs that helped this band from Limerick become one of the biggest success stories in Irish music history.

The Limerick-lilt to Dolores O’Riordan’s instantly recognisable voice attracts much comment, but her songwriting talents are less regularly acknowledged. She wrote most of The Cranberries’ big hits, including the one that has arguably weathered best, the powerful protest song, ‘Zombie’. Occasionally linked to the Riot grrrl punk movement for her tendency to tackle political issues in her lyrics, Dolores wrote ‘Zombie’ in memory of two boys who died in IRA bombings in Warrington, England during the band’s 1993 English tour. It was released the following year as the lead single off their second studio album, No Need to Argue, and won Best Song at the 1995 MTV Europe Music Awards.

This catchy love song, first released in 1992, was The Cranberries’ debut single. Featuring Dolores O’Riordan’s trademark yodelling, the song’s backing vocals are provided by her boyfriend at the time, Mike Mahoney. Suitably romantic, it went on to feature on the soundtrack of countless classic 1990’s TV shows and films, from My So-Called Life to You’ve Got Mail. The song was taken from the band’s first full-length album, Everybody Else Is Doing It, So Why Can’t We? (1993), a record which saw them become one of the first Irish bands since U2 to achieve major success in America. It ended up going five times platinum there and twice platinum in the UK.

‘Linger’, the follow-up to ‘Dreams’ released in 1993, was the band’s first big hit. Neither song had an instant impact, but their American tour with Suede later that year helped the band to gain recognition from MTV, who put the videos for both songs into rotation. The two singles were then reissued in 1994, with significantly more chart success: ‘Linger’ reached number three on the Irish charts and number eight in the United States. It was written by Dolores with The Cranberries guitarist Noel Hogan, and she has said that the lyrics are about the relationship that led to her first real kiss.

‘Ode to My Family’

‘Ode to My Family’, the second single from the band’s second album No Need to Argue, was again written by Dolores O’Riordan and Noel Hogan. This record is often described as ‘harder’ than their first, but with a melody almost like a lullaby, ‘Ode to My Family’ has an entirely different energy to the frenetic throb of ‘Zombie’. Its lyrics reference O’Riordan’s parents, her childhood in Limerick and mourning the loss of simple life as a celebrity. In a 1994 interview with Hot Press magazine, she described it as ‘a paean to the simple old days and the warmth and security of family life.’ It includes a string arrangement, also composed by O’Riordan.

The B-Side to the ‘Zombie’ single, the decidedly gentler ‘Away’ wasn’t included on the 1994 version of No Need to Argue but was part of its 2002 re-release, No Need to Argue (The Complete Sessions 1994-1995). This breathy, ethereal song is also part of the soundtrack of the 1995 film Clueless, a mid-90’s classic. The Cranberries were so much a part of the zeitgeist at the time that they are even mentioned in the film’s dialogue, with a major character complaining, ‘I can’t find my Cranberries CD. I gotta go to the quad before somebody snags it.’

A lover of William Butler Yeats’ dreamlike poetry and pacifist spirit, Dolores has said she wrote this song after visiting the site beneath Ben Bulben mountain in County Sligo where the poet is buried. In it she quotes a poem he wrote about his muse, Maud Gonne, at length, with the lines ‘Why should I blame her that she filled my days / With misery or that she would of late / Have taught to ignorant men violent ways / Or hurled the little street upon the great’. A nightmare of a typo led the song to be listed on the No Need to Argue sleeve as ‘Yeat’s Grave’ by accident, a grammatical error that was never corrected on later versions.

A scathing indictment of growing drug abuse in Ireland and elsewhere, this was the lead single from the band’s third album. To the Faithful Departed came out in 1996 and featured a slightly more blunt commentary on the social issues of the moment, as well as the band members’ personal experiences. Written as ecstasy reached new heights of popularity, ‘Salvation’ implores drug users to forgo artificial highs, repeating the refrain ‘Don’t do it’. It generated negative media attention for its supposedly ‘preachy’ tone, but O’Riordan and her bandmates told journalists that their point was more of an objection to the idea of being controlled by anything, but especially drugs. In spite of the criticism, the song held the top spot on Billboard’s Modern Rock chart for four weeks.

‘Free To Decide’ followed ‘Salvation’, with lyrics and music both written by Dolores. It was a direct response to what she described as harshness on the part of tabloid journalists who focused on her in particular after the band cancelled some scheduled Irish shows. With lyrics like ‘Cause I’m free to decide / And I’m not so suicidal after all’, it was released in 1996 as the second single from To The Faithful Departed.

The first single from the band’s fourth album, Bury the Hatchet (1999), the raucous ‘Promises’ deals with the subject of divorce. It was first performed live in Oslo, Norway, at the 1998 Nobel Peace Prize Concert honouring John Hume and David Trimble, two men who were instrumental in working to resolve the conflict in Northern Ireland. This was their first live gig after a three-year hiatus that began in 1996, and ‘Promises’ was released as a single a few months later.

Bury the Hatchet‘s second single, ‘Animal Instinct’, is one of what appears to be a very small number of rock songs that deal with the concept of motherhood and childbirth. The animal instinct referred to in the title is the love O’Riordan had for her first child, born during the hiatus prior to this album’s release. Before the pregnancy, she had been suffering from severe stress and anxiety, but she credited her son with helping her to find her way back to music, telling The Irish Independent newspaper, ‘I found my happiness again so I started singing again.’