An Art Lover's Guide To Dublin 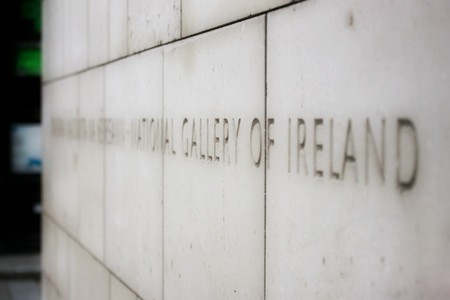 From prehistoric stone carvings through to modern art prints, the Irish penchant for creativity has always been able to find an suitable outlet. Dublin has stellar examples of all aspects of the nation’s artistic output, from the ancient to the present-day. Some of Europe’s finest galleries are here, as well as vibrant artist communities and one-off design shops.

The National Gallery of Ireland

The home of the national collection of Irish and European art, the National Gallery of Ireland has been sharing inspiring artworks with the public since 1864. It quickly developed an impressive collection that required the addition of an extra wing, when the Dowager Countess of Milltown left the contents of Russborough House to the gallery in 1897. Two years later, wealthy art collector Henry Vaughan also bequeathed a group of Turner watercolours to the collection, with the stipulation that they only be exhibited in January – a tradition that still continues today. This historic gallery is known for its illustrative collection of Irish art by painters like Jack B. Yeats, Sarah Purser and Louis le Brocquy.

A photo posted by National Gallery of Ireland (@nationalgalleryofireland) on Aug 12, 2016 at 8:25am PDT

The Irish Museum of Modern Art

Established by the Irish government in 1990, the Irish Museum of Modern Art (IMMA) is situated on the grounds of the former Royal Hospital in Kilmainham, built in 1684 to house retired soldiers, with a sophisticated design based on the Les Invalides complex in Paris. Directed by Sarah Glennie – former director of the Irish Film Institute and The Model in Sligo – this contemporary art museum showcases both established and emerging talents in its highly respected roster of temporary exhibitions. The organisation also runs a wide-ranging slate of educational programmes.

. A replica of #FrancisBacon's London studio located at 7 Reece Mews in South Kensington which he lived for the last 30 years of his life is presented here at the #HughLaneGallery in Dublin. It is in this studio where he painted some of his most memorable work such as the Triptych and the portrait of John Edwards. One can say the state of this space is a true representation of his mind. "I feel at home here in this chaos because chaos suggests images to me. And in any case I just love living in chaos. If I did have to leave and I went into a new room, in a week's time the thing would be in chaos. I do like things to be clean, I don't want the plates and things to be filthy dirty, but I like a chaotic atmosphere." #FrancisBaconStudio #ThisIsDublin #IgersDublin

Kerlin contemporary art gallery can be found just off the Grafton Street thoroughfare in a quiet alleyway you would be forgiven for missing. In the past, this cutting-edge minimalist exhibition space has hosted solo shows by international artists like Andy Warhol and Hiroshi Sugimoto, and its gallery artists include Richard Gorman, Willie Doherty and Liliane Tomasko. Upcoming exhibitors include Kathy Prendergast, the London-based Irish sculptor, painter and installation artist who won the prestigious Premio 2000 prize at the Venice Biennale 1995.

Named European Museum of the Year in 2002, the Chester Beatty Library is one of Ireland’s best cultural attractions. Left to the state by the 20th-century mining tycoon Sir Alfred Chester Beatty, the library is in possession of many of the world’s most import early religious and cultural artefacts, including Islamic and Far Eastern relics and early copies of the Old and New Testaments of the bible. The many manuscripts, prints, paintings, drawings and rare books that Chester Beatty collected throughout his long life have led to this treasure trove being called ‘not just the best museum in Dublin, but one of the best in Europe’ by Lonely Planet.

Temple Bar Gallery and Studios was first founded in 1983 as one of the country’s first artist-led arts organisations. A non-profit funded by the Irish Arts Council, today it consists of a contemporary exhibition space and 30 visual artists’ studios, located at the epicentre of Dublin’s Cultural Quarter. As well as exhibitions, they run regular talks, masterclasses and events for aspiring artists.

The guys from Peachy are busy setting up in the TBG+S Atrium space for their exhibition 'Fear' which opens tomorrow at 6:30pm #peachy #tbgands #fear #exhibition #print

This charming independent gallery and design shop has just expanded to a second location, which is always a good sign. Run by two brothers with a burning desire to champion the field of Irish art and craft, this Temple Bar store is frequently named in the Irish Times’ list of the best shops in the country, thanks to a plentiful stock of Irish-made prints, home accessories and jewellery.