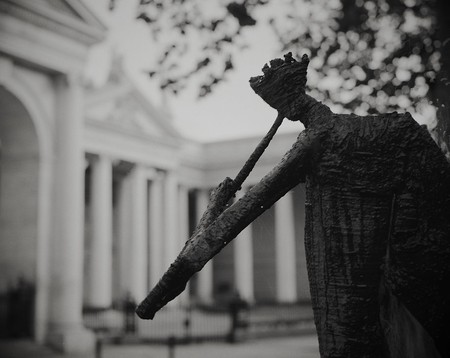 Dublin city is famous for its statues, both for the sheer number of prominent Irish citizens immortalised on its streets and the tendency of the public to nickname said statues. Life-size likenesses of celebrated revolutionary leaders, literary figures and musicians can all be viewed on a leisurely walking tour through the city centre. Here are the ones you shouldn’t miss.

A tour of Dublin’s statues must start on O’Connell Street. The city’s main thoroughfare was renamed for nationalist leader Daniel O’Connell (‘The Liberator’) in 1924, and his memorial statue stands at its entrance, overlooking O’Connell Bridge. Designed by Irish sculptor John Henry Foley, who also designed London’s Albert Memorial, it took almost twenty years to complete. Unveiled in 1882, it depicts O’Connell standing over four winged Victories and a crowd of figures, including the ‘Maid of Erin’ – meant to personify Ireland – who sustained a bullet hole in her arm during the 1916 Rising. 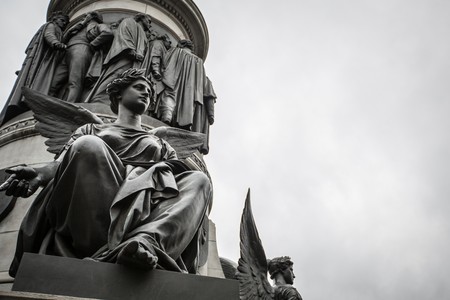 Irish trade union leader and activist James (Jim) Larkin’s statue – also on O’Connell Street – was unveiled in 1977. It shows Larkin, perhaps best known for his role in leading the 1913 Dublin Lock-out industrial dispute, standing with arms raised. The front of the statue is inscribed with the following extract from one of his famous speeches, a quote he borrowed from a French revolutionary: ‘The great appear great because we are on our knees: Let us rise.’ 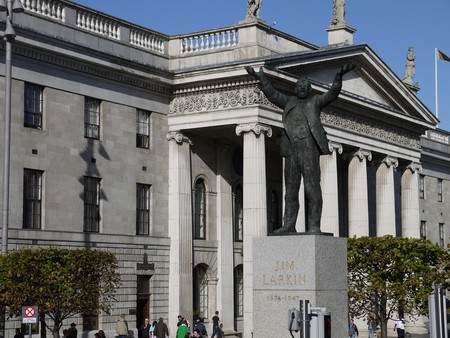 The Parnell monument stands at the north end of O’Connell Street, at the junction with Parnell Street. Erected in remembrance of the Irish nationalist politician Charles Stewart Parnell, it was designed by American sculptor Augustus Saint Gaudens. 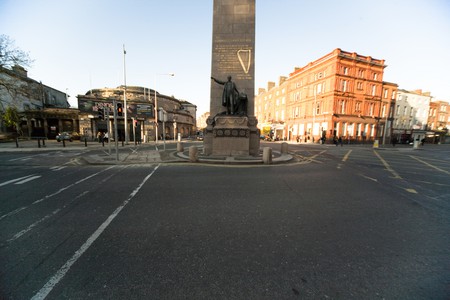 Ireland’s most famous writer, James Joyce, has a statue located just off O’Connell Street on North Earl Street, near the Spire of Dublin monument. The acclaimed Irish novelist is seen leaning on a walking stick, looking upwards as if in thought. 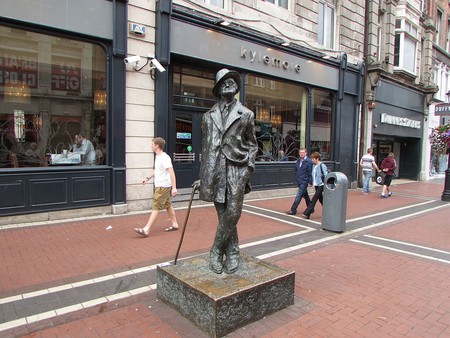 The location of the statue of the Countess Markievicz – legendary Irish politician, revolutionary and suffragette – is slightly off-the-beaten-track, outside the Markievicz Leisure Centre on Tara Street. Markievicz, who was the first woman elected to the British House of Commons and one of the first women in the world to hold a cabinet position, is represented along with her beloved pet dog Poppet. 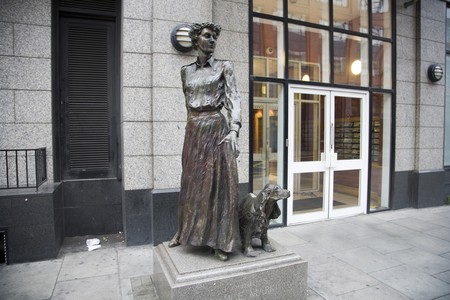 The ‘Famine’ sculpture, commissioned in 1997, is dedicated to those Irish people who were forced to emigrate around the world during the Great Famine of the 19th century. A collection of bronze figures by Dublin sculptor Rowan Gillespie stand at Custom House Quay in the Docklands, now Dublin’s financial services and tech centre and once a location from where Irish famine ships set sail for New York. In 2007, a second set of the sculptures was completed in Toronto to commemorate the Irish who emigrated there during this period. 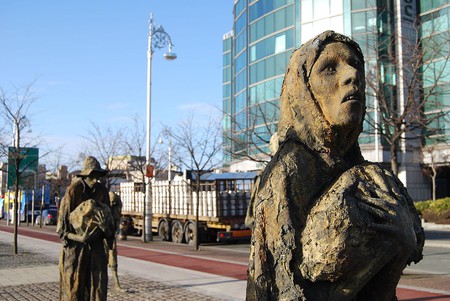 Crossing to the south side of the River Liffey via O’Connell Bridge, you will come to the front entrance of Trinity College, where famed alumnus Edmund Burke is immortalised. The Dublin-born statesman, author and philosopher looks from the entrance to the university across College Green. 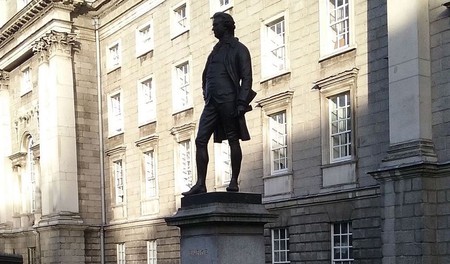 Standing in front of the entrance to Trinity College and looking up Dame Street you will be gifted with a clear view to the statue of Thomas Davis, a 19th century Irish writer and chief organiser of the nationalist Young Ireland political, cultural and social movement. 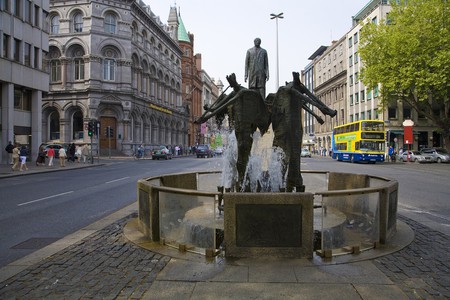 A short distance from Trinity College is the former site of the Molly Malone statue at the bottom of Grafton Street. Erected in 1988 to commemorate the heroine of the famous song that is synonymous with Dublin, the statue – a.k.a ‘The Tart With The Cart’ – has since been moved around the corner to Suffolk Street to allow for extension of the Luas tram system. 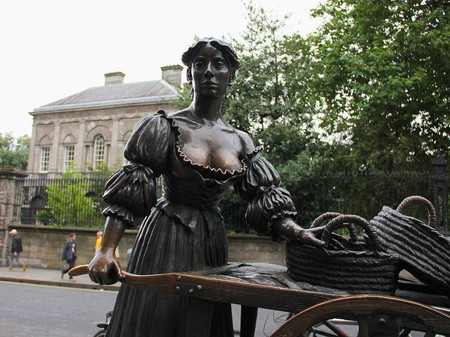 Just off Grafton Street on Harry Street a life-size bronze statue of Phil Lynott – rock star and frontman of the 1980s band Thin Lizzy – stands outside one of his favourite Dublin bars, Bruxelles. 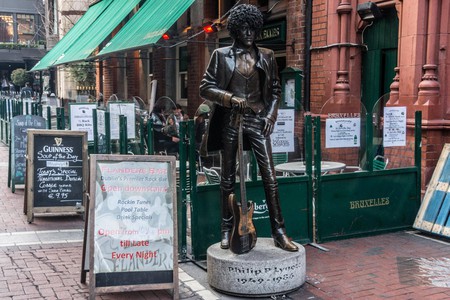 Oscar Wilde’s memorial sculpture in Merrion Square was commissioned by the Guinness Group in 1997. Located at the north corner of the park across the road from the witty writer’s former home, it depicts Wilde lounging on a rock, with a smile on one half of his face and a thoughtful frown on the other, representing the different sides of his character. The statue’s crass nickname – ‘The Fag on the Crag’ – is made all the more offensive when considering the fact that the writer’s early death is believed to have been caused by illness and injuries sustained while imprisoned for homosexuality. 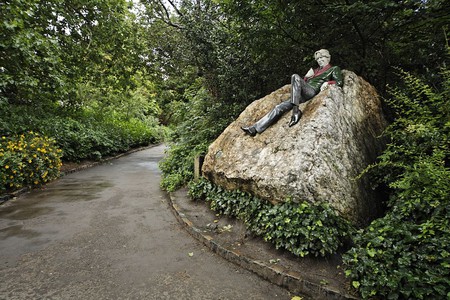 Oscar Wilde’s statue in Merrion Square is flanked by two smaller bronzes by the same sculptor, Danny Osborne. One shows Wilde’s wife, Constance, – pregnant and kneeling – and the other a male torso. 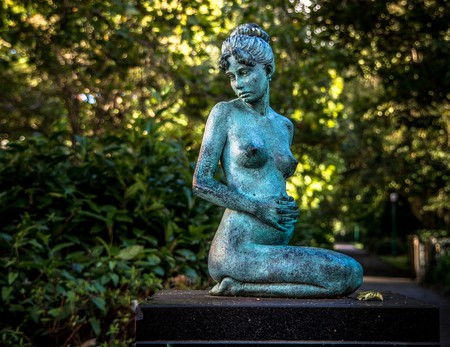 Anna Livia – a.k.a. ‘The Floozie in the Jacuzzi’ – is a bronze monument that was commissioned by British-Irish businessman Michael Smurfit in 1988. It is intended as a personification of the River Liffey, and is named after a character in James Joyce’s novel Finnegan’s Wake, who also represents the river. She was moved to Croppies Memorial Park from her original location on O’Connell Street to make room for the Spire of Dublin monument in 2001. 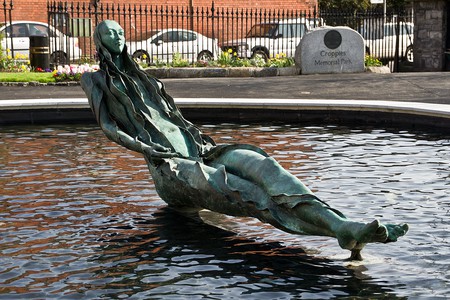