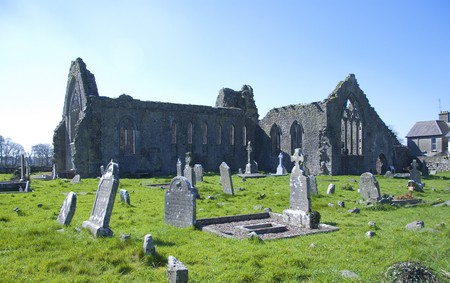 You could be forgiven for having partied through St Patrick’s Day without knowing quite who the patron saint of Ireland actually was. You wouldn’t be the first. Here’s a quick lowdown: Patrick, probably of welsh origin, came to Ireland in the 5th Century as a religious missionary. He originally arrived in Ireland earlier, as a young slave, but played a key role in changing the cultural landscape when he later returned. In reality, he was likely beaten to the punch when it came to introducing the religion, which makes him something of a symbol, but the key point stands – religion in Ireland has been pervasive for centuries, despite coming from outside.

Patrick’s ‘chasing the snakes out of Ireland’ might be metaphorical, but the impact of Patrick and his contemporaries in the country, particularly rurally, is marked. Churches are still the biggest buildings in most Irish towns.

The churches of Ireland are a study in themselves and come with some unique features, particularly in the pre-15th Century examples that still stand. You’ll find plenty in Galway, with the best sought out in the county’s more rural corners.

Round Towers, for example, are often associated with the tiny Wicklow village of Glendalough, one of Ireland’s most famous tourist spots, but they’re actually fairly ubiquitous across Ireland. Head to Kilmacduagh and you’ll find a great 10th-Century example, its door seven metres off the ground (a method of repelling attack), in the heart of the 34-metre-tall tube-like tower in the south of the county. Surrounding the tower, you’ll find a monastery crumbling into the scenery, approached by winding lanes between narrow stone walls. The soaring tower, incidentally, is the tallest such tower in existence. 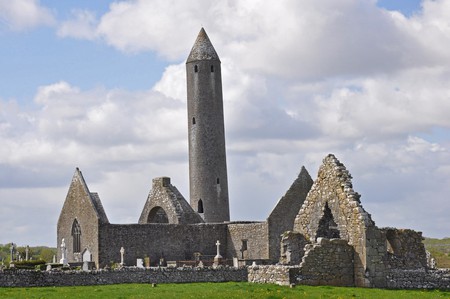 Founded just over a hundred years later, Knockmoy Abbey has the same chunky stone, tumble-down feel and the same sense of almost Gothic decay as Kilmacduagh. Knockmoy was founded by a 12th Century tribal King of Connacht (Galway’s provincial region) and dates – depending on the building – to any time up to the mid-16th century. You can still pick out many of the parts of the church amongst the roof-less walls.

Another roofless, special outline of a church with soaring walls is found in Claregalway. The church has stood unused since the 16th Century. The Franciscan Abbey outside the town probably dates back to the early 13th Century and is a symbol of the power religion once held in Ireland, a notion that’s been eroded substantially in recent years (though Ireland remains amongst the most religious countries in Europe).

Featuring a 24-metre bell tower, and huge wall, Claregalway is a beautiful ruin that’s free for the public to explore. It was once the pride of a Norman conquering knight who took control of this corner of Ireland, John de Cogan. 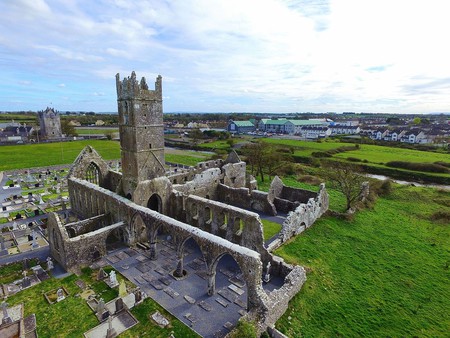 Another stop worth making in touring the remains of Galway’s ancient religious icons is Athenry. The town is best known for a folk song ‘Fields of Athenry’, written as a mourning tale set amid the Irish famine and now sung by Irish sports fans as they travel the world.

Founded in 1241, this Abbey is another that was cobbled together over centuries until it became a grandiose, castle-like structure, eventually vandalised by Oliver Cromwell’s army as he undertook his notorious invasion and sacking of Ireland in the 1650s. Much of the structure remains in place, crammed with fading tombs. Athenry’s ancient town walls are also worth strolling around.

Kilconnell Abbey was also hit hard by Cromwell as part of the same ongoing 1650 attack. It was eventually abandoned in 1690 but remains one of the better-maintained old church buildings standing in the county, dating back to 1353. The building sits in the heart of O’Kelly tribal territory and so received substantial protection in its earlier years.

There’s a whole lot more, should you have time to look; you’ll find almost no end of religious iconography, churches and symbols of devotion around Ireland. The crumbling ancient relics of rural Galway are as exquisite an exploration as any other you can imagine.