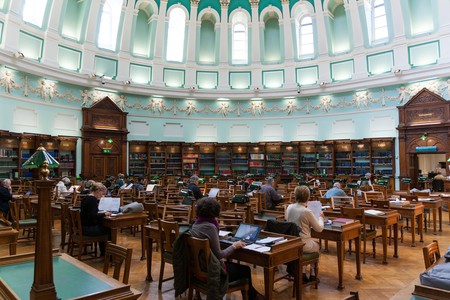 Ireland might not be a big country, but it’s been the birthplace of an incredible number of famous writers. Behind every good book is a good publisher, and whilst the major global publishing houses have printed many Irish authors, the abundance of successful small publishers here have their own stories to tell. From presses making their humble beginnings on kitchen tables, to those producing exclusive editions of renowned authors, what these businesses have in common is their desire to see Irish writing published and read in Ireland.

This story starts (as so many do) with a few creative people and an ambitious idea. The Cuala Press started out in 1902 as Dun Emer, an arts and crafts studio, and is notable for a couple of reasons. Firstly, you’ll find the poet and playwright W.B. Yeats at the heart of it: Yeats, along with his sisters Elizabeth and Lily, founded Dun Emer, also making the press one of only a few to be operated by women. As well as publishing many of Yeats’ own works, the press produced first editions of some of the most important writers of the Celtic Revival, a literary movement that triggered a fundamental shift in Irish writing.

Happy Birthday to the great Irish poet, W. B. Yeats! Yeats was a key figure in the Irish Literary Revival through his own poetry and dedication to supporting his fellow artists. We can see this in his role as editor of "A Broadside" produced by the Cuala Press which was run by Yeats' sisters. Each broadside includes beautiful illustrations, music, and two poems/songs. This image is from no. 5, 1935. #wbyeats #cualapress #irishpoetry #broadside #specialcollections #librariesofinstagram #queensulibrary

Following on from the closure of Cuala in the 1940s, the Dolmen Press started up in even more unassuming circumstances in 1951. Husband and wife team Liam and Josephine Miller launched the Dolmen Press with just a simple hand press, no experience, and the aim of providing a platform for Irish poetry. The press went on to become one of the most respected names in Irish publishing. One of the Dolmen Press’s highly notable publications is a translation by Thomas Kinsella of the Irish poem ‘The Táin’ that took an unbelievable 15 years to complete.

The Dolmen Press intended to counteract the growing pressure on Irish writers to emigrate in order to be published and receive recognition. Kinsella has acknowledged that the Dolmen poets ‘were fortunate to have a publisher in Ireland’ and went on to state, ‘Creative writers at that time were dependent totally on English publishers.’ Despite the work of the Dolmen Press, the need for more publication opportunities within Ireland persisted, and the Gallery Press, founded in 1970, came up with an even more creative solution.

Gallery Press has published some of the best-known modern Irish poets, including Derek Mahon and Seamus Heaney, despite the fact that many of their authors have big brands like Penguin and Faber & Faber as their primary publisher. Although these would normally prevent their work being published elsewhere, Gallery and its authors found a loophole by creating ‘interim volumes’ of poetry. These borrow from the major collections but are printed in the periods between them and are limited in length. This enables the writers to release work as pamphlets in their home country, without limiting them to only being published here.

Ireland’s small publishing houses have also formed a crucial stepping stone for new writers. In addition to a few reprints of authors such as Maeve Brennan who have fallen into comparative obscurity, the Stinging Fly Press has a short but growing catalogue of titles by emerging Irish authors, focusing on short stories in particular. The Stinging Fly started life as a literary magazine before expanding into publishing in 2005 and is still known as one of the most prestigious journals to be connected with.

Celebrating our 20th birthday through the month of March, we have 20% off all our books and back issues ordered through our website. Offer includes the current issue and subscriptions. #thestingingfly #newwriting #irishwriters #irishliterature

Small presses undoubtedly face challenges, from competing for publishing rights to making a profit on limited print runs, but for anyone who’s a budding writer, they provide a vital opportunity. The Stinging Fly magazine has regular submission rounds open to unpublished authors, and even the more established Gallery Press still invites writers to send in their poetry and plays. Just as new writers continue to emerge, so do publishing houses too – Tramp Press, set up in 2014, is one of the newest but most promising. Their approach is incredibly selective, reading around a thousand manuscripts a year and only selecting three to publish, but the result is celebrated titles for new authors, such as Sara Baume’s award-winning novel Spill Simmer Falter Wither. The chances of having your manuscript picked by any publisher may be slim, but at least smaller presses can guarantee your work a fair read and a response, rather than being lost in the sheer volume of submissions to major publishers.

From republishing established authors to reclaim their Irish identity to reviving writers and genres that have fallen out of popularity, and giving a platform for new voices to be heard for the first time, these small publishing houses have been responsible for shaping the Irish literary scene’s past, present and future.