A History Of The Old Jameson Distillery In 1 Minute

The Old Jameson Distillery in Smithfield, Dublin, was the site of production of Jameson Irish Whiskey until 1971. The company’s operations were then moved to Midleton, County Cork, and the old distillery lay dormant for 16 years. After suffering significant fire damage, it was renovated and converted into a museum and popular tourist attraction, seeing up to 350,000 visitors per year.

During the 18th and 19th centuries, Dublin was the centre of Ireland’s whiskey production, with large distilleries like Powers and Teelings within walking distance of each other. The founder of Jameson Irish Whiskey, Scotsman John Jameson, began to manage the distillery that belonged to his wife’s family in Dublin’s Bow Street in 1786. In 1805, he bought it outright, and five years later, he and his son of the same name officially founded the John Jameson and Son Irish Whiskey company.

At the time, Jameson was the world’s number one whiskey, and the distillery was producing one million gallons every year. To cope with that scale of production, the distillery expanded significantly under Jameson’s ownership. By the late 19th century, it had spread over five acres, with underground storage facilities to allow the sought-after beverage to mature properly. The distillery was nicknamed as a ‘city within a city’. 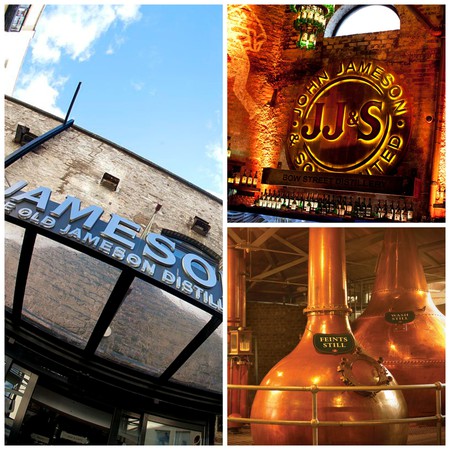 During the early 20th century, Jameson suffered heavily from the impact that the Irish War of Independence had on trade with Britain and the Commonwealth, and by the time the conflict ended in 1921, prohibition had been introduced in the US, cutting off that important market and further damaging the Irish alcohol industry.

In the 1960s, three of the four distillers in Ireland that had survived these trying times – Powers, Jameson and the Cork Distillery Company – came together to form Irish Distillers. In the 1970s, their pre-existing distilleries closed and production for all three moved to the New Midleton Distillery in County Cork. The last remaining solo distillery, Bushmills, also joined Irish Distillers in 1972.

Following the closure of the Old Jameson Distillery in 1971 and the transfer of operations to Midleton, the majority of its buildings were sold. In the 1990s, a fire caused extensive damage to what had once been the heart of the distillery, long neglected, but soon the Irish Distillers group bought it back, with the intention of opening a visitor centre and museum. In 1997, the Old Jameson Distillery Experience opened, with working small-scale production facilities, tasting bars and old Jameson memorabilia. The site has garnered around four million visitors since then. This summer, the old distillery was closed to allow for an extensive refurbishment, due to be completed just in time for Saint Patrick’s Day, 2017.