A History Of The Guinness Storehouse In 1 Minute 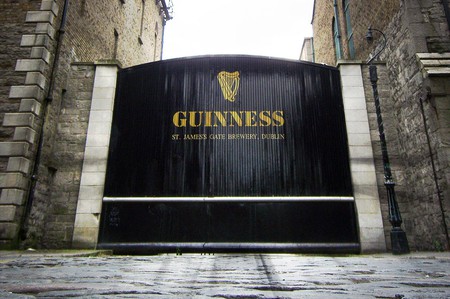 In 2015, the Guinness Storehouse had over 1.5 million visitors, confirming its place as Ireland’s most popular tourist attraction. Located at the James’ Gate Brewery in Dublin – or ‘the home of the black stuff,’ as it is also known – the Guinness-themed museum gives visitors a unique chance to assimilate the 250-year history of the country’s most famous beverage, culminating in a perfectly poured pint at the rooftop Gravity Bar overlooking the city.

Arthur Guinness first leased the now-famous brewery at St. James’s Gate in the historic Liberties neighbourhood back in 1759, so boldly confident in his new venture that he signed a 9,000 year lease, at £45 a year. Of course, his confidence turned out to be well-founded – it is now the biggest stout brewery in the world.

We’re always ready to welcome you to the Guinness Storehouse. Book online now and all you need to do is get ready to create your #StorehouseStory. Link in our bio. #Dublin #Guinness #GuinnessStorehouse #Tour #Travel

The Guinness Storehouse tourist attraction was established in 2000, but the building which houses it dates back to 1904. Located inside a former ‘hop house’ or fermentation plant for the stout – where the precious Guinness yeast was added to the recipe – it is a steel-framed construction modelled on the Chicago School of Architecture that was popular during the early 20th century. The idea for the new visitor centre was conceived in 1997, around the time that Guinness merged with the Grand Metropolitan company to become Diageo.

The €40 million refurbishment of the then-defunct storehouse was a collaboration between a British exhibition-design company and Dublin’s own RKD architects, who made no significant changes to the buildings exterior but remodelled the inside, while keeping much of the original structure intact. The Guinness Storehouse opened to the public in December 2000.

Looking for an experience that’s made of more? Then allow us to welcome you the Guinness Storehouse. Book your visit now. Link in our bio. #GuinnessStorehouse #Guinness #Tour #Travel #Dublin #Ireland

Spread over seven floors, the Guinness Storehouse was designed to immerse its many visitors in the history of one of the world’s most successful beer brands. Built around a giant tulip-shaped Guinness glass at its centre – which is an essential part of what their brand calls the ‘perfect pour’ – the Storehouse includes several interactive exhibition areas that depict how the process of making and selling Guinness has changed since the time of Arthur Guinness, including old brewing equipment and a live demonstration of the modern brewing process used by the company today. An advertising exhibit focuses on bygone Guinness ad campaigns, while the aforementioned ‘perfect pour’ can be practiced at the Guinness Academy.

The Guinness Storehouse is also home to the treasured Guinness Archive, a vast collection of historical records stretching as far back as the 1759 founding of the brewery. These artefacts, which can be viewed by appointment only, include genealogy records of former Guinness employees dating back to the 18th century. The tour ends with a free pint in the Gravity Bar, offering 360-degree views of Dublin spread out below.

Ascend the seven stories of the Guinness Storehouse and reward yourself with the pint that started the whole story. Last admissions are at 5pm. Book your ticket online now. Link in our bio. #GuinnessStorehouse #Guinness #Tour #Travel #Dublin #Ireland