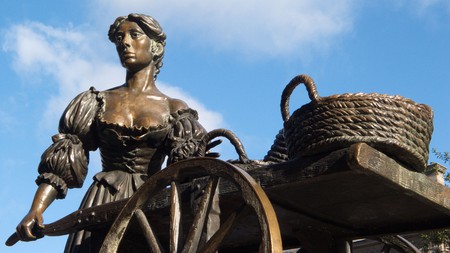 While Molly Malone is immortalised in a popular Irish song, no one knows if she was real | © Mark Dyball Picture Library / Alamy Stock Photo

Molly Malone is the enigmatic heroine of the famous song of the same name, widely recognised as Dublin’s unofficial anthem. Immortalised in bronze during the 1988 Dublin Millennium celebrations, the Molly Malone statue stands in the heart of the city’s historic Georgian Quarter. Though regularly upheld as a traditional Irish ballad, it’s not known where the song originated or if Molly Malone ever existed.

According to the lyrics of the undeniably catchy tune – also known as Cockles and Mussels – Molly was a young and beautiful fishmonger who sold her yield from a cart on the streets of Dublin. The song’s final verse states that after she died of a fever, she began haunting the city.

Although set in Ireland’s capital and beloved by many Dubliners, the song was originally published in the USA in 1876. While this version might be based on an older Irish folk ballad, cultural academics have argued that the melody and tragicomic lyrics are more akin to the music-hall style that was popular in Britain during the Victorian era. Indeed, in 1884, a version attributed to the Scottish composer James Yorkston was published in London.

To complicate matters further, in 2010, an earlier mention of Molly Malone was found in an 18th-century book of songs called Apollo’s Medley, printed in England in 1790. This more risqué version describes Molly as living in Howth, a fishing village northeast of Dublin. It recounts the singer’s yearning to share her bed, contributing to widespread speculation that the song’s leading lady worked as both a street vendor and a prostitute.

Despite her international fame, Molly Malone remains something of a mystery. While a popular figure in Irish lore, she became an urban legend towards the end of the 20th century when claims that she was a real person who lived in the 17th century became popularised. After a Mary Malone (the name Molly derives from Mary or Margaret) was discovered to have died in Dublin on 13 June 1699, the Dublin Millennium Commission joyously proclaimed 13 June Molly Malone Day, and in 1988, it unveiled her statue.

Created by the Irish sculptor Jeanne Rynhart, the statue depicts Molly in traditional but revealing 17th-century dress, hinting at her supposed job as a part-time prostitute and leading the bronze figure to be colloquially christened The Tart with the Cart. Although there’s no definitive proof that she was an actual person, the buxom statue has gone on to become one of Dublin’s most recognisable monuments, attracting hordes of tourists daily. Originally erected at the bottom of Grafton Street, it was moved to the adjoining Suffolk Street in 2014 to make way for the extension of the Luas tram system.