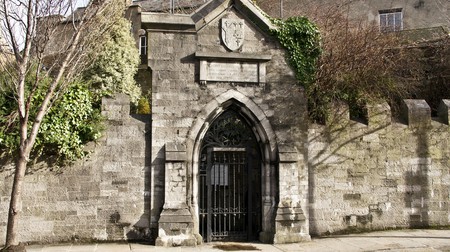 Erected in 1707, Marsh’s Library in Dublin was one of the first public libraries in Europe. Designed by Sir William Robinson – architect and then-Surveyor General of Ireland – it was named for the English clergyman who ordered its construction, Archbishop Narcissus Marsh. Carefully preserved, it is still a functioning library and retains its original 18th-century fittings. Today, the library’s towering oak shelves house over 25,000 books.

Narcissus Marsh was a Church of Ireland Archbishop of Dublin and a former Provost of Dublin’s Trinity College. During his tenure at Trinity he was vocal in his support of studying the Irish language, and helped to establish the Dublin Philosophical Society. As Archbishop, he sought the establishment of a public library for Dublin. The 1707 Act of Parliament that founded Marsh’s library was called ‘An Act for Settling and Preserving a Public Library for Ever’. The result of this act was one of the earliest and longest-standing Enlightenment-era libraries in the world.

Marsh’s Library was one of the last buildings in Dublin to be designed by Sir William Robinson before a corruption scandal led him to leave Ireland. His other famous Irish works included Charles Fort in Kinsale, County Cork and the Royal Hospital in Kilmainham. The library building and its front wall and gate are now protected structures. At the time of opening to the public, it was one the first free public libraries in Europe, established just over 50 years after Manchester’s Chetham’s Library opened in 1653. Chetham’s calls itself the oldest public library in the English-speaking world. 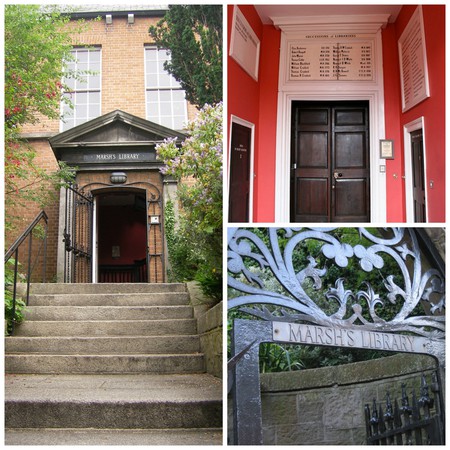 At the time of its foundation Archbishop Marsh donated his own personal library to the Marsh Library’s shelves, including thousands of books that had once belonged to the British theologian Edward Stillingfleet, worth £2,500. The library also benefited from a large donation from Irish churchman Bishop John Sterne upon his death in 1745. He bequeathed his rarest books to Marsh’s Library, and his manuscripts to Trinity College. After Narcissus Marsh’s death in 1713, he was buried close to the library, in the grounds of Saint Patrick’s Cathedral.

Once frequented by famous writers and scholars like Jonathan Swift, Bram Stoker, Sir Walter Scott and James Joyce, Marsh’s Library is a major attraction for the literary tourist. It equally attracts those eager to see a building that has been mostly unchanged since its construction over 300 years ago. Now a charity funded by the Department of Arts, Heritage and the Gaeltacht of the Irish government, the library is also regularly visited by scholars, who can make appointments to see the extensive collection of books and manuscripts covering subjects like medicine, law, science, literature and theology.