The Wonderful Barn in Ireland’s County Kildare is a distinctive, corkscrew-shaped building on the grounds of the Castletown House Estate. Dating back to 1743, with external stairs winding around its surface, the building is believed to have originally been a grain store.

Constructed from 1722 to 1729, Castletown House in the townland of Celbridge was Ireland’s first Palladian-style house, built towards the very beginning of the Georgian period. It was built for William Conolly, then-Speaker of the Irish House of Commons. The Wonderful Barn was a later addition to the 550-acre grand estate, constructed in 1743.

The Wonder of the Wonderful Barn

The Wonderful Barn is well known for its unusual design, built as it is in an inverted funnel shape rising to over 70 feet high, with a cantilevered set of 94 steps wrapping around the outside. It is unique in all of Ireland except for one other structure – the so-called Bottle Tower in Churchtown, Dublin. 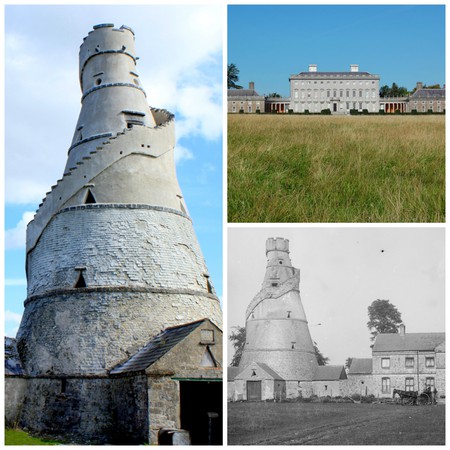 Relationship with the Bottle Tower

Also built on an estate owned by the Conollys, the Bottle Tower is said by many to be an imitation of the Wonderful Barn, as the latter is considered a much finer example. However, the date of construction of the Bottle Tower is put at either 1741 or 1742, believed to have been initiated by William’s wife, Katherine Conolly, with the aim of both storing grain and employing locals during and after the devastating Irish Famine of 1740–1741. The Wonderful Barn was built in 1743, also thought to have been a famine relief scheme.

Bounded on either side by two dovecote towers, the Wonderful Barn appears to have been used as a granary, a place to keep a large stockpile of grain in case of another famine. Each floor had a hole in the centre for the grain to pass through before it was dried out and later packed for winter storage. As it can be viewed from certain windows inside Castletown House, it is also believed that the architecturally unique building was intended to add character to the landscape. The structure is adjoined by a large two-storey residence called Barnhall House, with a walled garden.

📅 The grounds of Castletown Estate are open daily from 6.30am to 8pm