The Most Incredible Artists Who Have Called Dublin Home 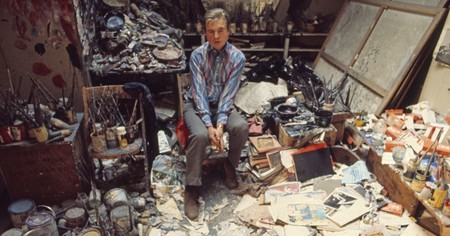 Francis Bacon in his studio in London in 1974, photo by Michael Holtz | © Photo 12 / Alamy Stock Photo

Politically-minded graffiti artists, an Olympic medalist and an artist who never placed copyright on his most famous work – Dublin’s most notable artists are a mixed bunch, but they have all contributed to the rich visual landscape of the city.

Dublin has always been a city from which artists draw inspiration. Literary giants such as Oscar Wilde and James Joyce have walked the cobbled streets, and musicians including U2, Sinead O’Connor and, of course, the Dubliners have added their melodies to the soundtrack of the city. The capital has also served as muse to visual artists, with contemporary galleries offering budding artists the chance to gain recognition alongside numerous notable names living and working in the city. These are some of the most famous artists who have called Dublin home.

The brother of Novel-prize winning poet William Butler Yeats, Jack Butler Yeats holds the unusual distinction of being both a world-renowned painter and an Olympic medallist. He split his life between London, his childhood home of Sligo and Dublin, and is arguably best known for his depiction of the Liffey Swim, an outdoor swimming race through the capital city that’s still going today. The painting won the silver medal in the ‘Arts and Culture’ section of the Olympic Games in 1924, which was the first and only year that such an Olympic event existed. Yeats was an elusive figure and never allowed anyone to watch him paint his symbolist and expressionist images, and so despite being the first Irish artist to see a painting sell for over €1 million in 2011, relatively little is known of the inspiration behind his work. 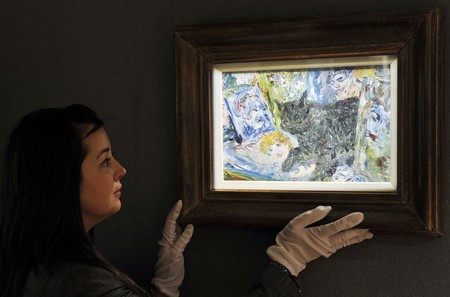 'The Cat Among Stars' 1939, by Jack Butler Yeats | © Ray Tang/Shutterstock

A modern Irish street artist known for decorating Dublin’s walls with striking colours and bold imagery, Maser gained significant mainstream attention in Dublin in 2016 when one of his political pieces became the topic of a national debate. The artwork depicted a heart endorsed with ‘Repeal the 8th’ and was created in protest against Ireland’s restrictive abortion laws (written into the constitution by the 8th Amendment). The piece was eventually removed due to planning permission laws, but not before the image became an icon of the Irish pro-choice campaign. In May 2018, the referendum to decide to fate of the 8th was successful in repealing the law, and Maser’s work is now known across the globe. 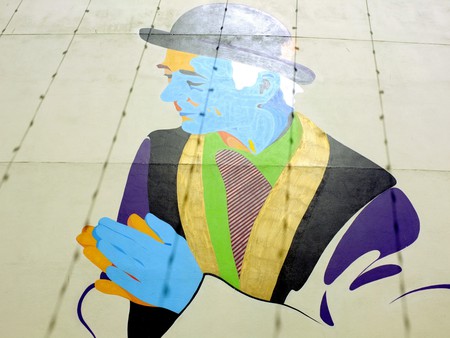 An image of Dublin DJ, author and photographer BP Fallon painted on the side of the Button Factory by Dublin street artist Maser | © Jonny White / Alamy Stock Photo

Splitting his time between London and Dublin, Orpen was an Irish artist who drew inspiration throughout his career from his homeland. A teacher at the Dublin Metropolitan School of Art in the early 1900s, he developed his plein-air style of painting through creating dreamy images of figures in Dublin’s Howth Bay. He was also a friend of art dealer and collector Hugh Lane, a hugely influential figure in the Celtic Revival movement which honoured Irish heritage through art. Orpen’s self-portraits, and his portraits depicting the wealthiest of Edwardian society, preceded an abrupt shift in career path when he headed for the front line in World War I. Here, as an official artist with the British army, he painted over 100 images of soldiers, prisoners of war and the dead. Many of those paintings now hang in the Imperial War Museum in London, though there are still a few Orpen offerings to be found in Dublin’s National Gallery. 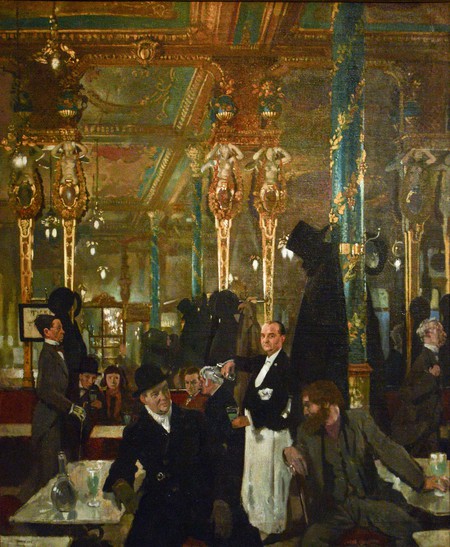 Dublin-born British artist Francis Bacon is known as much for his tumultuous private life as he is for his stark, emotional portraiture. Fixated on subjects like the Pope and the Crucifixion as well as his drinking companions and his own image, his paintings were characterised by a bleak and existentialist outlook. A gay man who spent much of his life exploring London’s raucous Soho scene and socialising with other notable figures such as Lucian Freud, Bacon’s work is now among some of the most highly prized modern art in the world. 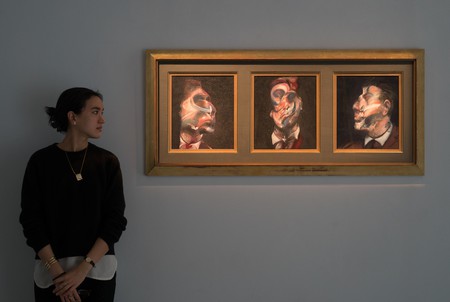 Three Studies of George Dyer by Francis Bacon, a triptych on show at Sotheby's in London before going for auction in New York. | © Roger Garfield / Alamy Stock Photo

Born to a French mother and an English father in Dublin, René Bull was a political cartoonist whose work took him across the globe. He covered various international conflicts in locations such as Sudan, India and South Africa, eventually segueing into a career as a Major in the Royal Air Force. His works were bright, colourful illustrations that explored satirical themes and usually aimed to make a pointed political case about the environment he depicted. Later in life, he also illustrated a number of books including fairytale collections such as Andersen’s Fairy Tales and The Arabian Nights. 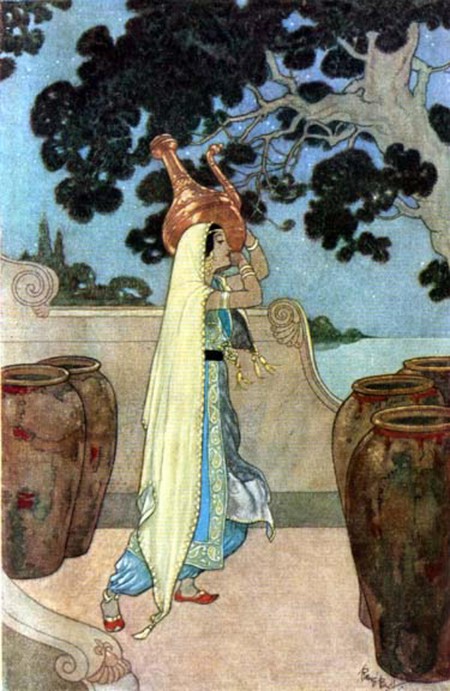 Another modern street artist, Solus is part of an extremely vibrant Dublin graffiti scene, with work visible around areas of the city such as Francis Street, Camden Street and Inchicore in particular. Using graffiti to explore the themes of conquering one’s demons (his first solo exhibition, held in Temple Bar in 2011, was titled Mis Spent Youth), Solus captures the sometimes troubled nature of Dublin as a city. He now also produces canvas-based art and has works on display in galleries from New York to Sydney, as well as regularly ‘performing live’ in producing his street pieces as part of various street festivals. 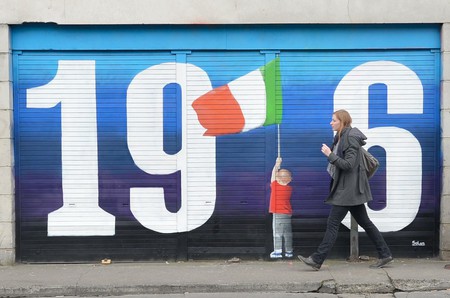 The latest street art masterpiece '1916' by Solus, a Dublin-based artist, commemorating the 1916 Irish Rebelion, completed just ahead of the centenary of Easter Sunday commemorations | © Artur Widak/Nurphoto/Shutterstock

A 19th-century landscape artist who depicted countless views in Dublin’s neighbouring county Wicklow, James Arthur O’Connor – who features heavily in Dublin’s National Gallery – has since been dubbed the ‘quiet man’ of Irish painting. O’Connor died so poor that a fund had to be set up to support his widow, but like many artists, he rose to posthumous fame. Many of his works are worth tens of thousands of pounds today and depict an almost mythical imagining of Ireland’s landscapes. 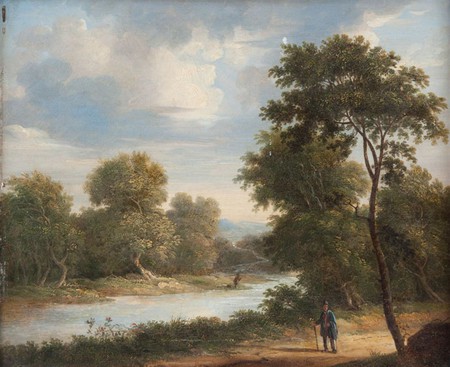 'A Traveller on a Riverside Road with a Fisherman in the Distance', 1836, by James Arthur O'Connor | © Art Collection 3 / Alamy Stock Photo

Although you may not have heard the name Jim Fitzpatrick, you have most definitely seen his most famous piece of work – he’s the creator of the iconic image of Cuban revolutionary Che Guevara that has been printed onto countless posters and t-shirts. Fitzpatrick produces artwork based heavily on Celtic symbolism and mythology, and the tone portrait of the revolutionary figure is somewhat of a departure from his normal style (although Guevara did have Irish roots.) Fitzpatrick never placed copyright on the piece, saying that the “horse had bolted” after it achieved its acclaim. Today, he sells his paintings online, with impressive local contributions including the designs of a number of Thin Lizzy album covers. 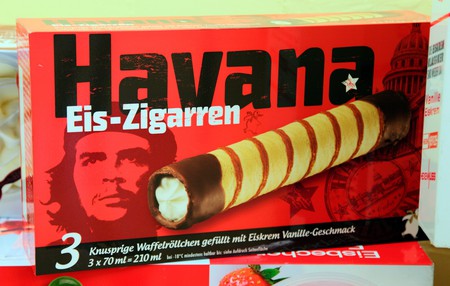