James Joyce’s Ulysses accounts the events of one day – June 16, 1904, now known as Bloomsday – in the life of Leopold Bloom. Set in Dublin in Joyce’s home nation of Ireland, Ulysses was initially thought of as ridiculous in England and the USA due to the novel’s notorious complexity of language, despite the praise of such writers as W.B. Yeats and T.S. Eliot, who hailed it as a work of genius. Ulysses has been adapted into many mediums, including theatre, film, audio and music. Here, we look at the different ways artists have responded to this momentous work.

Photos of Marilyn Monroe usually convey her as the sex and style icon that people perceive her to be. However, Eve Arnold, trusted and loyal photographer of Monroe, managed to create an exception to the rule. Though in a swimsuit, Monroe is not sexualized; she is intently reading James Joyce’s Ulysses and appears to have almost finished it. There has been much speculation as to whether this was a photograph staged in reaction to her ‘blonde’ persona. Yet Arnold stated years later that Monroe “kept Ulysses in her car and had been reading it for a long time […] When we stopped at a local playground to photograph, she got out the book and started to read while I loaded the film. So, of course, I photographed her.” 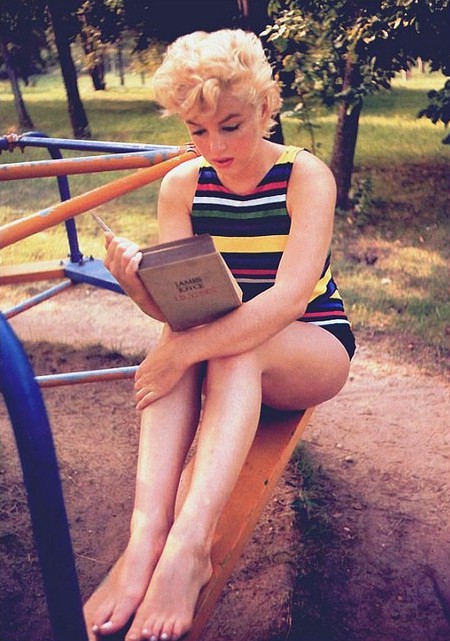 Joseph Kosuth’s work typically focuses upon language – its inadequacy juxtaposed against its importance. Thus Ulysses, a novel which has been both lauded and criticised for its difficult-to-decipher discourse, is naturally the perfect subject for him. Entitled Ulysses, 18 Titles and Hours, Kosuth follows Joyce’s 18 episodes of Bloomsday, each of which has a theme and each of which corresponds to the Greek classic, the Odyssey. The time of the day at which the particular episode took place is included. The act of finding the text – constructed in white neon light – around the room before being able to read it is all part of the intended experience. 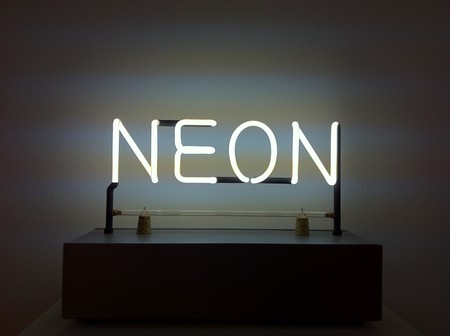 In a similar vein to the previous work, conceptualist Lawrence Weiner’s Mural Opus #843 (2004) also uses words as a focal point to his art. Weiner’s ethos is to avoid easy interpretation, making Joyce as his focus very apt. His work “features two densely poetic phrases that play on the wanderings of the novel’s protagonists and the topographic mode of thought in Ulysses,” (Atelier Augarten writing for Frieze). 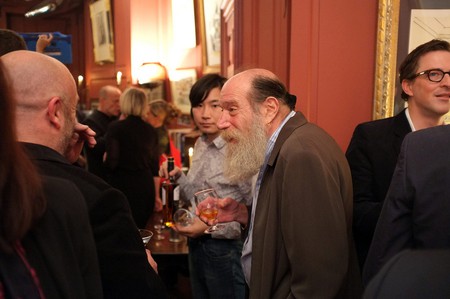 Robert Motherwell, an internationally acclaimed artist of Abstract Expressionism, produced something founded upon a similar concept to Kosuth and Weiner in his Ulysses Suite. Obscure etchings, taken from parts of the 700-page text, accompany a specially printed and bound alum-tawed pigskin edition of Ulysses. 20 of the pieces have been printed onto different colored Johannot Paper for display purposes. Motherwell was inspired by Ulysses throughout his entire career, often taking titles for his art work from the text. The project in its entirety took four years to plan and over a year to produce.

Pop artist Richard Hamilton’s life ambition was to illustrate the whole of Ulysses, which he fell in love with while fulfilling his National Service in the 1940s. However, by his death in 2011, he had only completed eight accompaniments for the 18 chapters which constitute this great text. This project illustrates Hamilton’s own love for Irish culture and politics, which he felt were eloquently presented in Joyce’s work. Hamilton’s work was featured in a 2002 exhibition at the British Museum entitled Imaging Ulysses. Then on Bloomsday of 2013, an exhibition featuring his art opened at the Tate. Examples of his features include He Foresaw His Pale Body (the title taken directly from the text) in which viewers see, through the eyes of character Leopold Bloom, Bloom stretched out in the bathtub. Stephen Coppel, assistant keeper of art at the British Museum, likened Hamilton’s unfinished project to that of romantic poet William Blake’s famous incomplete artwork produced to accompany Dante’s Divine Comedy.

An American book artist and binder has handwritten Joyce’s Ulysses, all of its 18 episodes, 700 pages, 265,000 words, onto 38 seven-foot-tall, two-inch-diameter poles. Charlene Matthews wants people to take away the ‘magic of the hand written word’ from her artwork. It took her two years to complete this mammoth project consisting of incredibly intricate and technical work. An inconceivable achievement, heightened because it was during this process that she read the modern epic for the first time. Stephen Gertz, writing for The Book Tryst, described her work as “a landscape to physically move through; the novel as literary grove, Ulysses as trees of life with language as fragrant, hallucinatory bark, and trunks reaching toward the sky.” The poles contain all the inconsistencies and typing mistakes from the original version of the novel, as well as the natural nuances of the wooden material.

Illustrator Rob Berry has created an online comic book adaptation of Ulysses, now available as an Apple app, said to serve as a visual aide to Joyce’s often impenetrable classic. Berry’s aim is to maintain the subtle humour of Joyce in the comic book form. It also contains links to blogs and other helpful sites which incites interactive reading and an online community forum for discussion. The Huffington Post assessed that it “appeals to the sort of reader Joyce would have loved: someone willing to embrace new forms, someone comfortable with popular culture, and above all someone with a sense of humor and imagination.” Ulysses Seen published Telemachus, the first episode of the book, in June 2009, but the whole unabridged project is expected to take approximately ten years. As artist Berry is working with Joyce expert Mike Barsanti, the result is both loyal to the original text and innovative in its outlook. Ulysses Unseen questions “Why is the most famous novel of the 20th century the least read?” and answers, “We dunno. But we aim to fix it.” 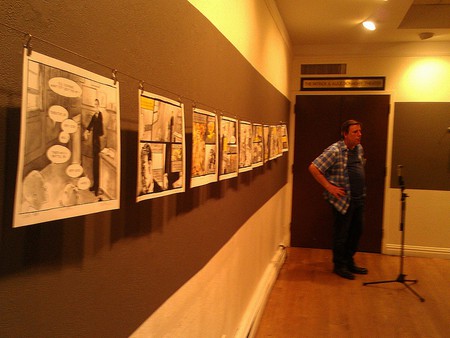