The Picturesque Castles in Ireland You Can Actually Stay In 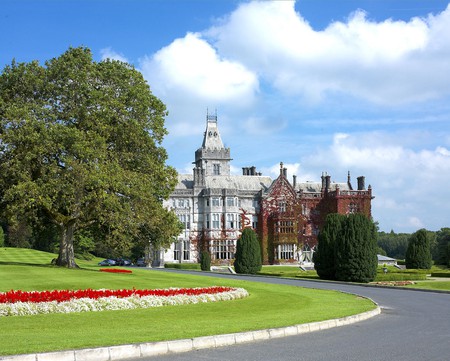 The antiquated castles peppering the Irish landscape are no less enchanting for being plentiful, and sometimes a view from outside or a guided tour isn’t enough. If you want to be immersed in the powerful feeling of centuries of history living within their stone walls overnight, the following seven castles in Ireland have been converted into luxury hotels or private residences available to rent for short stays.

Hotel
Facebook
Email
Twitter
Pinterest
Copy link
Share
Map View
The medieval tower house of Hatch’s Castle in Ardee, County Louth can be traced back to the 14th century, but has been seamlessly absorbed into the modern streetscape of the town. The dwelling was given to the Hatch family by the English military leader Oliver Cromwell, before William Hatch was the first chairman of the Ardee Town Council in 1844. The four-storied castle is currently a private residence, but rooms within can be rented on Airbnb from €69 per night.
Open In Google Maps
Hatchs Castle Market Street, Cappocksgreen, Ardee, County Louth, Ireland
Give us feedback

Resort, Hotel
Facebook
Email
Twitter
Pinterest
Copy link
Share
Map View
View Rooms
Limerick’s stunning Adare Manor in its current neo-gothic form was built during the 19th century, but aspects of it are believed to date back to the end of the 1600s. The castle lands were owned for a time by members of the Welsh-Norman FitzGerald family that owned Waterford Castle, but were later passed to several different English and Anglo-Irish families, ending up as the seat of the Earl of Dunraven. It is now a five-star luxury hotel, where guests can stay in stately bedrooms including that of the former lady of the house, Lady Caroline Wyndham. The castle is currently undergoing an extensive renovation due for completion in 2017, but their manor lodges and self-catering villas will be available for this winter.
EVERYTHING YOU NEED TO KNOW

Hotel
Facebook
Email
Twitter
Pinterest
Copy link
Share
Map View
One of around 50 castle forts built in Ireland during the 19th century, the Bartra Martello tower in Dalkey has been renovated and converted into a luxury residence. For €449 per night, two guests can stay in this one-bedroom tower constructed in 1804, now a National Monument. Complete with a rooftop terrace and working fireplace, and with a vista taking in Dublin Bay, this place has peaceful romantic getaway written all over it.
Open In Google Maps
Cascais, 2 Harbour Crescent, Dalkey, Dalkey, County Dublin, A96 F6R6, Ireland
Give us feedback

The castle at Trim is the biggest Norman castle in the country at 30,000 square metres. It was built by Hugh de Lancy – Lord of Meath – in the 12th century, and later became one of the primary filming locations for the 1995 film Braveheart. Perched on a high vantage point overlooking the River Boyne, Trim Castle was the site of a number of meetings of the Irish Parliament during the 15th century. It was restored by Ireland’s Office of Public Works during the 1990s at a price of €6 million. Though you can’t actually stay inside the castle itself, the next-door Trim Castle Hotel affords spectacular views of the three-story keep.

Hotel
Facebook
Email
Twitter
Pinterest
Copy link
Share
Map View
This tower in the forest of the Clandeboye Estate in County Down is described as a folly – which is to say it’s a building mainly intended for decoration. Finished in 1861, it was designed by the Scottish architect William Burn – who pioneered the ‘castle-like’ Scottish Baronial style – for the British public servant Lord Dufferin, who owned the estate at the time. Helen’s Tower, named for Lord Duffer’s mother, can now be rented out from the Irish Landmark Trust at a fee of around €370 for 3 nights.
Open In Google Maps
Helens Tower Newtownards, Northern Ireland, BT23 4RX, United Kingdom
Give us feedback

Hotel
Facebook
Email
Twitter
Pinterest
Copy link
Share
Map View
Lough Cutra Castle in Galway was designed by the same man who designed much of Buckingham Palace, the British architect John Nash. In 1797, the British soldier and politician Colonel Charles Vereker inherited the land and commissioned the building of the gothic-style castle in the same style as Nash’s own home in East Cowes, north of the Isle of Wight. Overlooking a 1,000-acre lake, the entire castle can be privately rented to accommodate 17 guests, plus another 23 in other buildings on the estate for a total of 40 guests. Former guests at the castle have included Prince Charles, Irish President Michael D. Higgins, Bob Geldof, W.B. Yeats and Lady Augusta Gregory.
Open In Google Maps
Lough Cutra Lodge Lough Cutra Gort, County Galway, Ireland
+353862229184
Visit Website
Give us feedback
Give us feedback