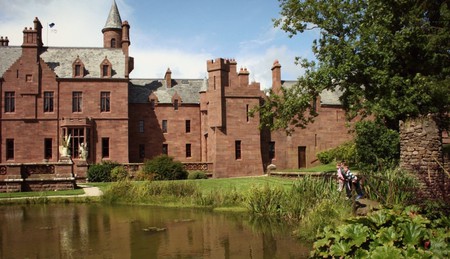 Historic castles in the Irish countryside have already captured the imaginations of many a celebrity – Michael Jackson fell in love with Blackwater Castle in Castletownroche, while actor Jeremy Irons bought and renovated his own ‘pink castle’ at Kilcoe in West Cork. But a few of these fairytale-appropriate homes are still up for grabs, from dilapidated medieval fortresses to a grand Dalkey ‘summer home’ with its own private harbour.

If you dream of putting your own stamp on your chosen castle and don’t mind hard work, this fixer-upper on Cork’s River Lee has definite potential. Originally a defensive fort built in the late 16th century, it’s advertised as having already had work done to its ‘windows, door surrounds, and murder hole’, which – for those new to castles – is a hole in the ceiling through which harmful objects could be ‘fired, thrown or poured’ to deter enemies. The site has been given planning permission to allow for the added alterations and renovations it would need to be made habitable.

The grounds of the long-standing Knockabbey Castle in Ardee, County Louth, are said by Discover Ireland to be home to ‘some of the finest historical water gardens anywhere in the country, dating back to the 11th century’. The castle was extended and changed significantly over the course of its history and is divided into three distinct sections as a result: an entrance area through the Tower House features vaulted ceilings and flagstone flooring; a Gothic section houses the kitchen, family room, dining room and four bedrooms; while the Queen Anne section is home to a majestic staircase hall, a walnut-floored drawing room with a marble fireplace, a library, and more bedrooms (there are ten in total).

This Victorian ‘mock castle’ – meaning not designed for defence – was built in 1845 near the Ballyhoura Mountains in County Limerick. The current castle was commissioned by two granddaughters of a former captain under Oliver Cromwell. Built in red sandstone in the Scottish baronial style, Castle Oliver features a wood-panelled library, billiard room, 12 en-suite bedrooms and Ireland’s largest wine cellar, capable of holding some 55,000 bottles. Now restored, the castle once featured in the book Vanishing Country Houses of Ireland, published in 1989 by the Irish Georgian Society.

Currently for sale through Sherry Fitzgerald auctioneers, Glin Castle was once home to the FitzGerald family, hereditary Knights of Glin. They were granted ownership of lands in County Limerick by the British crown, which they held for 700 years, until the last remaining Knight of Glin – Desmond FitzGerald – died in 2011. (Incidentally, Desmond FitzGerald was the president of the Irish Georgian Society and main creator of the Vanishing Country Houses of Ireland book mentioned above.) Today, the castle and its 380 acres of private parkland on the Shannon Estuary is on the market at an asking price of €6.5million. Its expansive interior boasts antique furniture and paintings, Corinthian columns and Venetian windows.

Glin Castle remains one of Ireland's finest remaining castles. Located in Country Limerick, Glin was the ancestral home of the FitzGerald clan for 700 years, until five years ago with the passing of Desmond FitzGerald (the last Knight of Glin). #greathousesofireland #traditionalarchitecture #irisharchitecture #glincastle #irishcastle #ireland

Situated only ten miles outside Dublin city, this castle in Dalkey has the added advantage of having its own working harbour, one of only two private marinas in the entire county. It was built in 1847 as a summer home by a celebrated cardiac doctor from Dublin named Sir Dominic Corrigan and played host to such visitors as Kings Edward VII and George V of England throughout its long life. Though it has been refurbished recently, it retains classic architectural features including Tudor roses. Outside, the castle is surrounded by Italianate gardens and a decked terrace overlooking the harbour.

"Inniscorrig Castle" Situated in a remarkable position on the coast, this romantic castle features a private harbor with direct sea access as well as incredible views of the sea from all the principal rooms. #InniscorrigCastle #Inniscorrig #Castle #luxuryHome #ChristiesHomes #LuxuryLiving #SeaAccess #coast #views #Dalkey #Ireland #VictorianMansion

Premier Properties Ireland are selling a fully furnished medieval ‘square towered fortress’ in Kilmaine, County Mayo, erected by a family called the De Burgos. Built to align with the summit of the mountain of Croagh Patrick, this West of Ireland castle comes with 13 walled acres of pasture. The interior has a great hall complete with a stone ‘inglenook‘ fireplace, oak banquet table capable of seating 25, and a ‘minstrel’s gallery’, making this the dream location for a large dinner party or wedding.