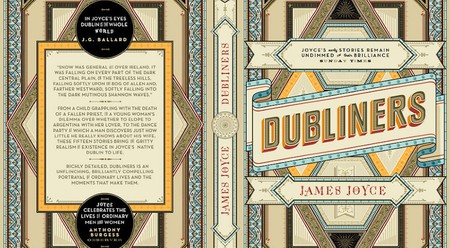 Dublin produced many of the most important English-language writers of the 20th century, with novelists like Jonathan Swift, Oscar Wilde, James Joyce and Samuel Beckett all throwing down the gauntlet for those coming later. The city has provided the backdrop for some of the best books of the last one hundred years. Here are ten literary works that feature Ireland’s capital.

Though first published in Paris in 1922, Joyce’s masterwork Ulysses is very much a Dublin novel, depicting a day spent by fictional Dubliner Leopold Bloom as he traverses the city. Indeed, Ulysses takes in so many Dublin landmarks that annual Bloomsday celebrations on June 26th – the day the novel is set – trace his route, taking in sites from Davy Byrne’s pub on Duke Street to the Martello tower in Sandycove. It is widely believed that Ulysses was originally banned in Ireland (it was censored in the UK until the 1930s), but in fact, the Irish government prevented it entering the country in the first place through a customs law.

#Repost from @paperbackandco. ・・・ Fun fact: Ulysses was smuggled into the US by lawyer Morris Ernst and @penguinrandomhouse founder Bennett Cerf after being banned in both the US and England for obscenity. In 1932, Cerf was determined to reverse the decision and fight book censorship. He crafted a scenario that would lead to a court ruling on the book. But first, a crime had to be committed, so it was arranged for a smuggled copy to be intercepted at an American port of entry. The trial, called United States vs. One Book Named Ulysses is one of the most important events to occur in literature. Also, the judge enjoyed it enough to call Joyce a great artist in words. #books #book #vscocam #bibliophile #minimalism #bookaddict #bookstagram #bookstagramfeature #bookporn #booklover #booknerd #bookish#bookaholic #bookish#booksandbeans #penguinstagram #jamesjoyce #dubliners #ulysses #literate #literature #bookrecommendation #booksofinstagram #history #igreads #booksofinstagram #instagram

Winner of the 2007 Man Booker Prize, Anne Enright’s The Gathering is described by the author herself as ‘…the intellectual equivalent of a Hollywood weepie’. The book was generally considered the underdog to win the prize, but ended up being chosen for the fact that it is ‘powerful, uncomfortable and, at times, angry’. The impetus for the novel is the suicide of the protagonist’s brother, which sets her off on a struggle to uncover what may have caused it. A discomfiting tale of family secrets, The Gathering was also the 2008 Irish Novel of the Year at the Irish Book Awards.

J. P. Donleavy’s 1955 book The Ginger Man has sold more than 40 million copies and been listed as one of the 100 Best Novels of the 20th Century by the Modern Library in 1998. The story of misogynistic Trinity College student Sebastian Dangerfield and his sexual exploits in Dublin has been made into both a stage adaptation and a 90-minute BBC television special, and almost made it into a big screen version, with rumours of actor Johnny Depp starring. A pub on Dublin’s Fenian Street – close to Trinity – has been named after Donleavy’s novel. This one was also published in Paris, and banned in both Ireland and the US for being obscene. Donleavy celebrated his 90th birthday in April.

The Barrytown Trilogy by Roddy Doyle (1992)

This recommendation includes three books rather than one, as The Barrytown Trilogy is best appreciated as a unit. Dublin-born author Roddy Doyle published his first three novels as a trilogy in 1992, with all three focusing on a working-class family from Dublin’s Northside called the Rabbittes. The Commitments (1987), The Snapper (1990) and The Van (1991) focus on different members of the Rabbitte family as they navigate unemployment, unwanted pregnancy and family ties. All three were made into films in the 1990s which have become Irish cult classics, while the third and final novel – The Van – was shortlisted for the 1991 Man Booker Prize.

Beloved Irish author Maeve Binchy was known worldwide for her talent for describing life in Ireland in a way that was both accurate and kind. Her 1982 collection of short stories set in Dublin’s affluent ‘D4‘ district follows a group of residents of the area, each dealing with their own unique set of circumstances. One story follows a society wife who invites her husband’s mistress to dine at their home, and another sees a young student coming to terms with an unexpected pregnancy. There’s alcoholism, adultery and fear in here, but the overarching tone is rich with Binchy’s trademark humour and empathy.

Irish writer Brian Nolan – better known by his pen name Flann O’Brien – submitted his novel At Swim-Two-Birds to the Longman publishers in the 1930s, where it was suggested for publication by the English novelist Graham Greene, working as a reader at the time. A post-modernist work of metafiction, the novel features multiple plots-within-plots, fantastical characters who interact with their author in an attempt to change their fates, as well as a first-person narrator – an Irish student of literature who is never named, but reveals that he lives with an uncle employed as a clerk at Dublin’s Guinness Brewery.

"Answers do not matter so much as questions, said the Good Fairy. A good question is very hard to answer. The better the question the harder the answer. There is no answer at all to a very good question." #FlannOBrien #AtSwimTwoBirds #civicmedia2006 @events_dublin_city_council #dublinonecityonebook

The Illusionist by Jennifer Johnston (1995)

Another Dublin-born author, Jennifer Johnston has written 27 novels and won multiple awards, including the Whitbread Book Award (now the Costa Book Awards) – for her 1979 novel The Old Jest – and an Irish PEN Award for Literature in 2006. The Illusionist, published in 1995, revolves around a Dubliner called Stella Glover who is attempting to reconnect with her estranged daughter, whose father was an ‘illusionist’. Moving between flashbacks to their family life in London to her present day, this novel has been described as one of Johnston’s finest.

The Book of Evidence by John Banville (1989)

The Book of Evidence by John Banville is based on a true story of a Dublin murder, in which Malcolm Edward MacArthur – a man described as an ‘eccentric’ who descended from a wealthy Dublin family – murdered a nurse while stealing her car and hid at the home of the Irish Attorney General at the time, who was a friend. Banville’s character is called Freddie Montgomery, a scientist who kills a servant in an Anglo-Irish ‘big house’ while trying to steal back a painting that his mother has sold.

Another from the ever-expanding tbr list. The only Banville I've read so far has been The Sea, which I loved, though I know it caused controversy after winning the Man Booker. Has anyone read Book of Evidence yet, or heard anything about it? The idea of a literary mystery appeals to me a lot! – – – – – – – – – #bookstagram #bookstagramfeature #tbr #johnbanville #bookofevidence #book #reading #bibliophile #bookworm #booklover #mystery #manbooker

Iris Murdoch’s ninth novel, The Red and the Green, is set among the members of an Anglo-Irish family during the week leading up to the Easter Rising, 1916. An Irish Protestant raised in England, Murdoch had to conduct lengthy research before writing this novel. The book – which was to be Murdoch’s only work with a historical basis – blends Irish history and politics with romantic relationships and a complicated family dynamic, even including incest as a theme. It received a mixed reception at the time of its release, but the Irish Times recently wrote that the novel succeeded ‘as a metaphor for divided political, religious and cultural loyalties in 1916.’

Another by James Joyce, Dubliners is a collection of 15 short stories by the quintessential Dublin author. Beginning from the perspectives of child characters and culminating with ‘The Dead‘, each one chronicles an aspect of the Irish middle class in the capital city during the early 20th century, a time of huge political change and shifting ideas about Irish identity. These stories are more grounded in reality than his other works, with Dublin city itself serving as the unifying root for all the stories.